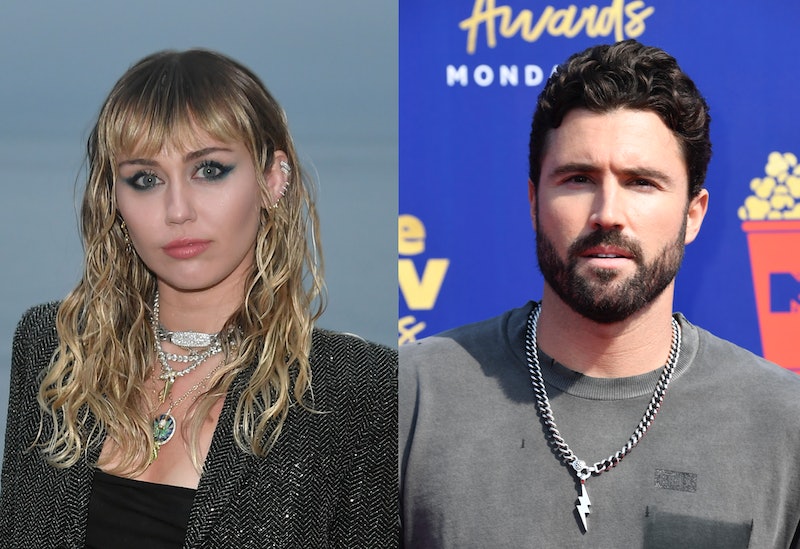 Breaking up is hard to do, no doubt about that. Breaking up is made even harder, though, when you're a celebrity in the public eye, and everyone is watching all your post-split moves. As per a screenshot captured by @CommentsByCelebs, Brody Jenner and Miley Cyrus' recent Instagram exchange didn't exactly add any clarity to their respective breakups, which have shocked fans in recent weeks. In fact, it kind of made both of their situations even more confusing.

So, first, a little background. On Aug. 2, Jenner and his wife Kaitlynn Carter announced that they were parting ways after a little more than one year of marriage. About a week later, Cyrus and Liam Hemsworth — who've been together for around a decade and recently tied the knot in December 2018 — revealed that they too, had decided to separate. But wait — there's more.

Shortly before Cyrus and Hemsworth announced their split, Cyrus, her older sister Brandi, and Carter decided to go on a girls' trip vacation to Italy. The trio all posted several pics of the adventure on their respective social media pages, but Entertainment Tonight snapped some additional photos that seemingly showed Cyrus and Carter sharing an intimate-looking kiss.

Several outlets began to speculate about the nature of Carter and Cyrus' relationship, which ended up leading to a few eye-brow raising Instagram exchanges. First, Jenner posted a photo of himself looking pensive by the water with a caption that read, "Don't let yesterday take up too much of today." Then, Jenner's friend and co-star on The Hills: New Beginnings, Brandon Lee, replied "Let's round this scandal out and post a pic of us making out."

Now, it's unclear whether or not there was any truth to what the tabloids were saying about Cyrus and Carter getting cozy. Lee's comment appeared to be pretty light-hearted, though, and Jenner seemingly replied with the same kind of humor. "Watch out!" he wrote. "Pics of Liam and I holding hands on the beach coming soon."

Let's stop to think about this for a minute: If Cyrus and Carter were actually hooking up so soon after their respective splits, it's safe to assume that Jenner and Hemsworth probably wouldn't be thrilled, right? And therefore, Jenner probably wouldn't be like, openly joking about it on social media ... right? Who knows.

Cyrus ended up chiming in on the whole thing herself, though, and replied to Jenner and Lee's thread with a comment to Jenner, specifically. "@brodyjenner go take a nap in your truck and cool off," she wrote, followed by "#HotGirlSummer" and the two dancing girls emoji.

OK. What ... is happening here? Was Cyrus joking, too? Or was that a legit dig against Jenner?

Jenner had recently commented with "Hot girl summer" — a reference to Megan Thee Stallion's eponymous song and trending phenomenon — on a pic that Carter posted of her and Cyrus from Italy, but he didn't seem all that mad about their vacay. Cyrus probably wasn't thrilled about Jenner and Lee roping Hemsworth into their conversation, but seeing as how she's never been one to mince words, per se, if she was actually mad, she probably would have been a bit more direct ... right? Ugh, again, who knows.

Perhaps fans will get some clarity about this whole thing in the coming weeks. If not, though, hopefully everyone involved will be able to happily move on from their respective situations in a positive way.