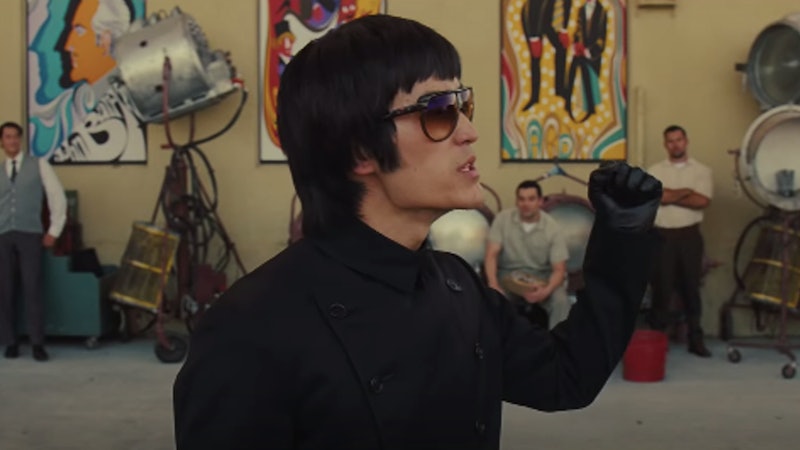 Quentin Tarantino's latest film is a look at Hollywood in 1969 that includes both fake actors like Leonardo DiCaprio's Rick Dalton, and real ones like Sharon Tate, played by Margot Robbie. But in a new interview, Bruce Lee's daughter reacted to Once Upon A Time In Hollywood's portrayal of her father, who pops up in a memorable scene that she found hard to watch. And it's clear she was disappointed by the director's portrayal of the legendary actor. Slight spoilers ahead for Once Upon A Time In Hollywood.

“It was really uncomfortable to sit in the theater and listen to people laugh at my father,” Shannon Lee, who runs BruceLee.com, told TheWrap about watching Once Upon A Time In Hollywood.

In the film, Brad Pitt's stuntman Cliff Booth ends up getting into a fight with Lee, played by Mike Moh, on the set of his TV show The Green Hornet after he boasts that he could defeat Muhammad Ali. The two decide to fight — best two out of three. Lee wins the first round, knocking the aging stuntman to the ground. But, in the second round, Cliff is able to stop Lee's punches and ends up throwing him into a car. The fight is stopped before either man wins, and is pretty much played for laughs.

The scene, according to Shannon, was proof of how the film portrays her dad as “an arrogant a–hole who was full of hot air," which she said that couldn't be further from the truth. “Here, he’s the one with all the puffery and he’s the one challenging Brad Pitt," she noted. "Which is not how he was.

Lee biographer Matthew Polly agreed, telling The Wrap, "Bruce Lee was often a cocky, strutting, braggart, but Tarantino took those traits and exaggerated them to the point of a SNL caricature."

“I understand they want to make the Brad Pitt character this super bad-ass who could beat up Bruce Lee," Shannon added. "But they didn’t need to treat him in the way that white Hollywood did when he was alive.”

Shannon made that case that her dad had to fight harder than white performers to be taken seriously in Hollywood. Many credit Bruce Lee with changing how American audiences saw Asian performers.While she said she understood that OUATIH is a "rage fantasy" about two antiheroes, she also asserted that turning the martial arts star into a joke hurts Lee's legacy. “What I’m interested in is raising the consciousness of who Bruce Lee was as a human being and how he lived his life,” she said. “All of that was flushed down the toilet in this portrayal, and made my father into this arrogant punching bag.”

Shannon isn't the only family member of one of real actors who appear in the film to speak out. Tate's sister, Debra expressed her initial concerns with the film, but after talking to Tarantino, had a change of heart. "Quentin is a very stand-up guy; he has a lot of morals," she told Grazia Daily back in May, before seeing the film. "When he presented me with the script I was very happy with it, but I won’t say one word about what happens."

Tarantino has not responded to Shannon's comments, but as discussion about Lee's portrayal in Once Upon A Time In Hollywood continues, it will be interesting to see if the director chooses to weigh in.