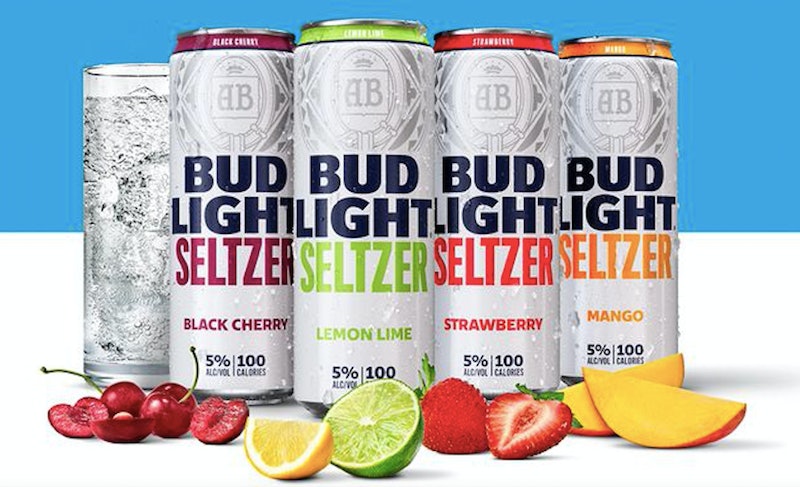 White Claw might want to watch its ridiculously popular back, because another brand just pushed its way onto the hard seltzer playground. Bud Light is releasing its own hard seltzer in early 2020 in four flavors, including black cherry, lemon lime, strawberry, and mango. They'll sell in 12-ounce "slim" cans in variety packs of 12, so you can go ahead and taste the whole watery alcohol-filled rainbow on your first go.

"Seltzer has brought excitement to the entire category and brought consumers back to beer," Andy Goeler, vice president of marketing at Bud Light, stated in a press release. "We are looking forward to leveraging the power of the Bud Light brand to help grow the category." Leveraging the power!! I take back my playground analogy from earlier. Bud Light did not come here to play. Similar to to White Claw, its biggest competitor (per CNN business, they currently make up 58% of spiked seltzer sales), Bud Light Seltzer will have an ABV of 5%, and is made with natural flavors. I am also guessing that, similar to White Claw — and what was arguably its predecessor, LaCroix, who walked so White Claw could run — that it will taste like you're thinking really hard about the fruit it's supposed to taste like, and less like the actual fruit.

As someone who is an unrepentant Bud Light stan, I have to admit I am curious how this is going to pan out — particularly because I frequently go for Bud Light in lieu of hard seltzers. But Bud Light is coming out bold right out of the gates on this one, so they must be pretty confident in its potential market.

If you've been on the hard seltzer beat lately, you'll know that White Claw had quite the summer — and that said summer seems to be going on and on and on. After its huge spike in popularity, September saw a national White Claw shortage that I feel in my heart more affected the good people of Twitter shouting about it than it did actual White Claw consumers (I, for one, have seen plenty of it in major retailers — which admittedly could just be a result of New Yorkers prioritizing their booze over anything that isn't a bagel). Following that up was the sexy White Claw costume that I'm sure saw its fair share of Instagrams this Halloween. And just in case that wasn't enough, a hard seltzer advent calendar arrived, featuring a variety of hard seltzers that include White Claw (although it seems Bud Light Seltzer has missed the deadline on that).

One thing's for sure — the hard seltzer crowd isn't going away anytime soon. Welcome to the bubbly party, Bud Light Seltzer; I look forward to seeing the sexy costume of you come Halloween 2020.