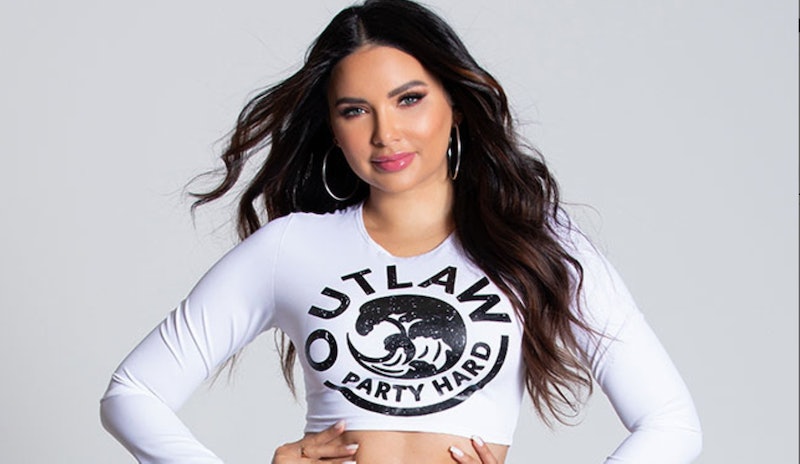 Just when you thought you were clear out of the Summer of White Claw, where it seemed like everyone and their brother was Instagram Story-ing a shot of the now-iconic hard seltzer can, it turns out White Claw's reign is only just beginning. Sexy apparel site Yandy just launched a sexy White Claw costume for 2019, so now you can drink your bubbles and wear them, too.

The ensemble — dubbed the "Yandy Hard Outlaw Costume" — comes complete with a "stretch crop top with an OUTLAW, PARTY HARD screen print, long fitted sleeves, high waisted shorts with #DARTY printed in black on the rear, flattering high cut sides, and a cheeky cut back," according to Yandy. It retails for $54.95 (or, in layman's terms, approximately three and a half variety 12-packs of White Claw), and does not include the featured fishnet stockings and thigh high boots — or, for that matter, the can of White Claw you'll likely be toting around all Halloween night. I'd stock up now, considering the literal White Claw shortage that plagued end-of-summer parties round the nation in early September.

Here's what you'll look like if you opt to "White Claw, but make it sexy" this year.

For the record, this is not your only option when it comes to White Claw costumes; you can opt to get yourself this White Claw t-shirt to pair with other accessories for a mere $9.99. Decidedly less flashy, yes, but far more cost-effective. You can also buy multi-colored White Claw tank tops for $14.95 a pop, so your entire hard seltzer stanning squad can represent.

But maybe — just maybe — it could be worth holding off for a few weeks. Last year White Claw themselves released Halloween costumes, where instead of the shirt you could dress up as the literal can. Er, sorry — "Clawstumes." That release was in early October, though, so if they're planning a comeback, you might have to sit tight.

That calendar is available for preorder now, and will ship in November; so, ostensibly, you could order yourself a sexy White Claw costume now, wear it in October, get your hard seltzer advent calendar in November, and sip yourself some White Claw in December. Which is to say — summer may be over, but the sun will never set on our obsession with White Claw.

More like this
The 8 Best Chew Bones For Puppies, According To A Vet
By Andrea Hannah
I Tried The $20 TikTok Viral Oishii Strawberries — Here's What I Thought
By Sophie Hanson
Trust Me, Pickle Martinis Are The New It Drink Of The Season
By Emma Carey
The 6 Best Vacuum Seal Containers
By Cristina Sanza
Get Even More From Bustle — Sign Up For The Newsletter