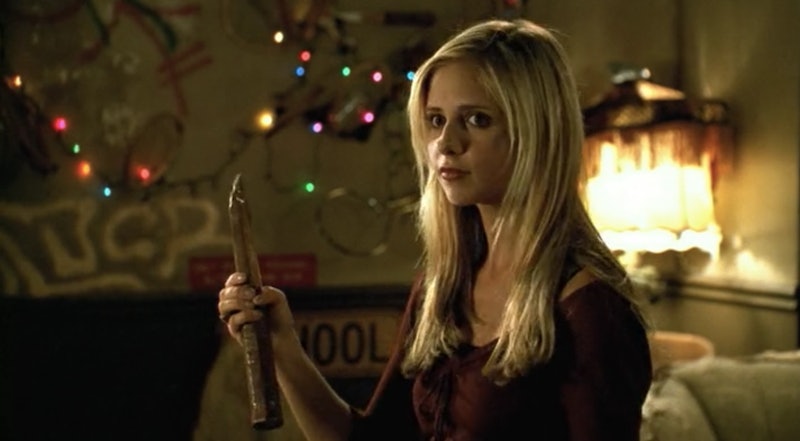 This impact can be as obvious as the television shows that Buffy very clearly inspired: for one, Veronica Mars. Like Miss Summers before her, Veronica was a small blonde with a quick wit, kicking ass and taking names in a fictional California town that was a magnet for demons (this time metaphorical), darkness, and danger. Even without knowing about showrunner Rob Thomas’ reported appreciation for Buffy the Vampire Slayer, the connection between the two shows is unmissable. They even share some of the same actors, with both Alyson Hannigan (Willow on Buffy) and Charisma Carpenter (Cordelia on Buffy and Angel) appearing as recurring characters on Veronica Mars after their stints on Buffy the Vampire Slayer had ended.

The show's influence can be as subtle as narrative styles that it cemented in the cultural zeitgeist. Sure, Buffy didn’t invent snappy, meme-worthy dialogue heavy with pop culture references (see I Love Lucy from 1951 to 1957, Scream from 1996, or Animaniacs from 1993) just like Harry Potter didn’t invent the idea of a magical boarding school (see The Worst Witch, Circle of Magic, or A Wizard of Earthsea). However, it's the first thing that everyone thinks of when you bring up the concept because that's one of the keys to its enduring popularity.

Buffy was one of the series that let the world know that shows about exceptional teenage girls could not only succeed, but become iconic.

It’s hard to watch a fast-talking show like Gilmore Girls without being at least a little reminded of Buffy, directly or indirectly. Buffy's classic one-liner, "I may be dead, but I’m still pretty" is a clear precursor of Rory Gilmore's equally classic "Who cares if I'm pretty if I fail my finals?" Giles telling Xander that he wants coffee instead of tea because "tea is soothing. I wish to be tense" is an early version of Lorelai telling Luke that, "This is not an herbal tea morning. This is a coffee morning." And who can forget Paris Geller's direct reference, "Apologize to your parents. Tell them you’ll pay them back for the two semesters you spent studying Buffy the Vampire Slayer’s effect on the feminist agenda"?

On the surface, the two shows have so little in common that they would seem to attract two completely different kinds of viewers: Buffy is a paranormal horror show about a teenage girl chosen to fight apocalyptic evil threats to her city, and Gilmore Girls is a slice of life family drama about a young mother and her teenage daughter in a quirky small town. But commonalities like their snappy dialogue mean their fan bases often overlap, as viewers missing Buffy's wit could feel right at home in Stars Hollow with Rory and Lorelai. And Buffy was one of the series that let the world know that shows about exceptional teenage girls could not only succeed, but become iconic (something Rory certainly strived to achieve).

Of course, it isn't just the television landscape that has been affected. Buffy's legacy can be found in written fiction, both professional and fan-created. The Buffy Universe, or Buffyverse, left many storylines open-ended, like Buffy's on-again off-again relationship with Angel. Fans happily filled in the blanks with their own stories set in the universe of the show, several of which were highlighted in a 2017 New York Times article. "I’d finished all the episodes of the show, but I needed more," fan Terri Meeker told the Times on why she wrote her story, Buffy vs. Donald, which reimagines the 2016 election as if Buffy were involved. "Fan fiction was a way to do that."

You don’t even need to specifically read Buffy fan fiction to feel the show’s presence in the world of other fiction. There are too many books to count that referenced Buffy subtly or overtly because the authors themselves are fans, too. Rachel Hawkins' Rebel Belles trilogy "definitely owes a debt to Buffy (a girly girl who kicks butt? YES, PLEASE)," according to the author in a 2016 interview with The Young Folks. L.L. McKinney's upcoming novel A Blade So Black has been described by the author as "what if Buffy fell down the rabbit hole instead of Alice?" And San Diego Comic-Con 2015 had an entire panel called "The Buffy Effect: Teen Heroines Then and Now," in which authors like Kiersten White (And I Darken) and Rae Carson (Walk The Earth a Stranger) cited the show as a key inspiration in how they wrote their female characters.

No matter where you look, even 15 years after the show went off the air, Buffy is inescapable, inevitable, an invisible thread lacing seemingly unrelated fandoms together, from Veronica Mars to The Vampire Diaries to Doctor Who. In addition to Veronica Mars showrunner Rob Thomas admiring the show, The Vampire Diaries executive producer Julie Plec called Damon "our Buffy" in terms of sassy comebacks and over-the-top dialogue, and Doctor Who showrunner Russell T. Davies used Buffy as an inspiration in his 2005 reboot, saying that the show "raised the bar" for genre writers.

I don’t have to watch Buffy now, and I don’t have to have watched it then. I owe many of my fandoms, and many of the things I enjoy about the fandoms that I’m in, to Buffy the Vampire Slayer. Buffy gave us kickass blondes and snappy dialogue; seasonal Big Bads like Aaron Echolls from Veronica Mars and the Yellow Eyed Demon from Supernatural; musical episodes of The Flash, Supergirl, and Once Upon a Time; and longterm lesbian OTP relationships like Alex and Maggie of Supergirl and Callie and Arizona on Grey's Anatomy. We owe it all to a show that may not have invented the wheel, but certainly reinvented it.

That’s the legacy of Buffy. It’s knowing the melody to a song that you never learned the words to but feel [is] part of your personal soundtrack.

Of course, it’s not as though anyone is denying the impact that Buffy has had on pop culture. Even after Joss Whedon, creator and showrunner, was alleged to be nowhere near as feminist as the shows he created, the Buffyverse continues in comic book and novel form, there are constant talks of a reboot or sequel series, and the decision to remove Buffy from Netflix in April 2017 was met with near-universal devastation from the show’s almost militantly loyal fan base. But, from the outside looking in, it feels like the true impact of Buffy on pop culture is best shown in the fact that you don’t have to be a fan of the show to benefit from the fact that it aired from 1996 to 2003.

You don’t have to be able to quote a single episode to know that Buffy was famous for dialogue that was surpassingly witty yet genuinely sounded like it could be uttered by the average teen. You don’t have to have watched a single second to be able to pick most of the Buffy cast out of any show or movie they show up in, whether it's Sarah Michelle Gellar in The Crazy Ones or David Boreanaz in SEAL Team. You don’t even have to be into vampires to know that Angel and Spike were the original Team Edward vs. Team Jacob from Twilight or Team Stefan vs. Team Damon on Vampire Diaries. “Sunnydale,” “Hellmouth,” or “Scoobies” may have never come out of your mouth, but you can admit that they’d sound familiar before you could place the context.

That’s the legacy of Buffy. It’s knowing the melody to a song that you never learned the words to but have heard on the radio enough times for it to feel like part of your personal soundtrack.

I watched those six episodes of Buffy three years ago, and I remember being bored. I’ve seen this show before, I thought. I’ve seen loads of shows like this before and with better special effects. I didn't realize it then, but it was thanks to that show that I’d seen loads of shows like it already. Because Buffy came first, and is the reason that so much came after it.

More like this
Does 'Locke & Key’s Ending Mean There Could Be A Season 4?
By Sophia Moore
The 'PLL: Original Sin' Creators Say A’s Identity Will Be “Very Clear” By The Season Finale
By Alyssa Lapid
'The Sandman’s Ending Is A Departure From Neil Gaiman’s Comic Book Series
By Kadin Burnett
'Paper Girls' Season 2 Could Introduce Even More New Characters & Threats
By Brad Witter
Get Even More From Bustle — Sign Up For The Newsletter