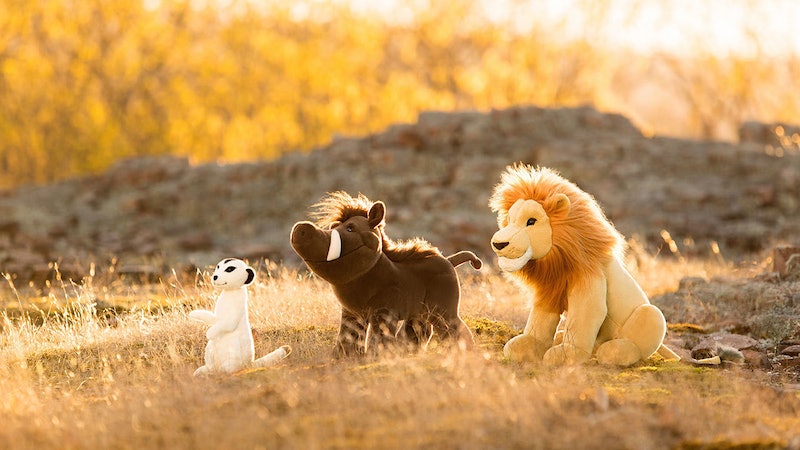 Supposedly teddy bears aren't meant for those over a certain age but hey, that's nobody's business, am I right? From collectables, to cuddleables, to gifts from exes — nearly everybody has felt connection to a teddy. And guys, you might be about to build that collection even more. Because Build A Bear Workshop are launching a Lion King range.

Caaaaan you hear the fluuuuff toniiiight? Yes, I can too. The range is being released just in time for the new film which is out in UK cinemas on July 19.

OK the biggest question is which characters will be available for your cuddles. Well guys, they have young Nala, young Simba, grown Nala, grown Simba, and most importantly — Pumbaa. Any fan of The Lion King knows Pumbaa is where it's at.

Apart from the beautiful beasties available there is also a whole range of wavy garms for your little cuddly angels. And if that isn't enough to wet your whistle — there are also soundbites hidden inside some of the floofers.

You heard me! OK, we aren't so lucky as to have Beyonce and Donald Glover's rendition of Can You Feel The Love Tonight. However, the two soundbites available will be just the ticket for any true fan.

The very famous Nants Ingonyama can be yours. That's the start of Circle Of Life to you and me. So could be an ideal like, new baby gift for someone. Hold the teddy up, then the baby up. It will work, just trust me on this. The alternative soundbite is the similarly catchy I Just Can't Wait To Be King.

The Pumbaa toy (can't talk right now, ordering five) is just as cute as the warthog angel that makes us all smile. As a matter of fact, I found out that his name translates to "silly" in Swahili which seems about right.

Cuddle him, love him, take him to the mall. This teddy Pumbaa will be a perfect alternative to actually owning a pet pig.

And when I said wavy garms, I really mean it guys. Like as in, why can't I get them in adult human size? This sequinned halter dress is everything I need in my wardrobe.

This cute AF halter number will give your teddy an instant, stylish make over.

All of the little beasties come with The Lion King stamped on their wee paws and let's be honest, are a must for collectors.

If teddies aren't your thing, you could pop to Primark for their collaboration or why not poodle on over to ASOS to see what they are repping.

Like I said before, this is all in celebration of the upcoming film which is no doubt set to be an absolute crowd-pleaser. And I guess you can bring your teddy to the cinema with you right? OK, maybe that's too far, but guys — we all know the storyline and you might well need something to cuddle.