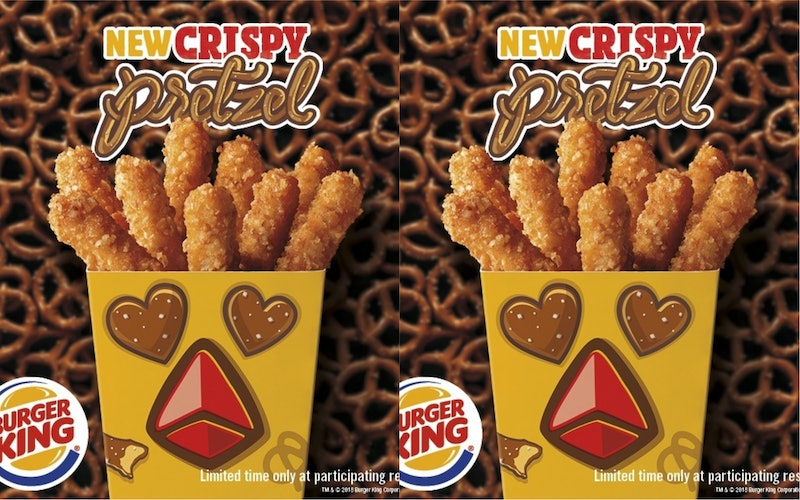 Once upon a time, long, long ago, fries were fries and chicken was chicken. Then, one magical day, the reigning king of quickly prepared food, Burger King, declared the two would henceforth be united in holy matrimony, and then we had chicken fries. Chicken fries are exactly what they sound like — fry-shaped chicken — but the good king couldn't stop there. We've just learned Burger King is selling crispy pretzel chicken fries, taking your fry — and chicken — game to a whole other level.

The new Crispy Pretzel Chicken Fries don't need much introduction. They're made of white meat chicken in a crispy breading and then covered in salty breading with pretzel pieces, making for a major crunch on the outside, and a warm and soft squishiness on the inside. It's not only an explosion of flavors and textures in your mouth, but I'd like to also point out the convenience of being able to consume chicken like a fry. We've come so far.

As these were just launched officially on June 7 in participating Burger King locations, according to Burger King's press release, not many people have had the opportunity to try them out. But YouTuber Peep THIS Out! got his hands on some. Here's what he had to say.

They're a wee bit thinner than Burger King's original chicken fries and possibly saltier — not that that's ever a bad thing — and ultimately, he gave the crispy pretzel chicken fries two greasy thumbs up. He went for some major dunkage and dipped his chicken fries in honey mustard sauce, which I surmise is a top notch flavor combination, although I wouldn't be opposed to smothering them in ranch, either.

Chicken fries have caused a lot of drama over the last 13 years or so. Burger King first introduced them back in 2005, and it was love at first bite. (BAH! I'm so proud of that one!) Then, for reasons we'll probably never know, in 2012, Burger King took chicken fries away from us, pried them from our chicken fingers, snatched them away in the middle of the night.

For the next couple of years, we were stuck with regular, mere mortal fried chicken and your run-of-the-mill fries.

Magically, mysteriously, Burger King brought chicken fries back in early 2015 — this time, for good. I'm not quite ready to forgive and forget yet, but BK is slowly, slllowwwwwllllyyyyy, working their way back into our good graces.

Ugh. I mean. Have you ever seen anything so gorgeous? Look at the way it sparkles.

I think Burger King knew it did us dirty by taking away our beloved chicken fries for a moment there, which might help explain the fiery chicken fries they briefly brought to the menu later on in summer of 2015. It kind of sounded like a "Hey, we're sorry we ruined your life for a second" sort of apology.

The king wasn't in the mood to play when he came up with this recipe, because those things were spicy AF. Not spicy like they left a little tingle in your mouth. Spicy like snot was dripping out of your nose two pieces in and your eyelids were sweating. While spicy chicken fries are long gone from the menu (a relief to colons everywhere), you can still order the spicy nuggets, which I'm sure are delicious but still argue aren't as fun to eat as chicken fries. Sorry. :-\

Chicken fries are so famous that to promote their return back in 2015, Burger King created a chicken fries emoji keyboard that even included animated GIFs. These were what was missing from life all along.

If you're in the mood for something moist but crunchy and deliciously salty, head to a Burger King near you for an order of crispy pretzel chicken fries.