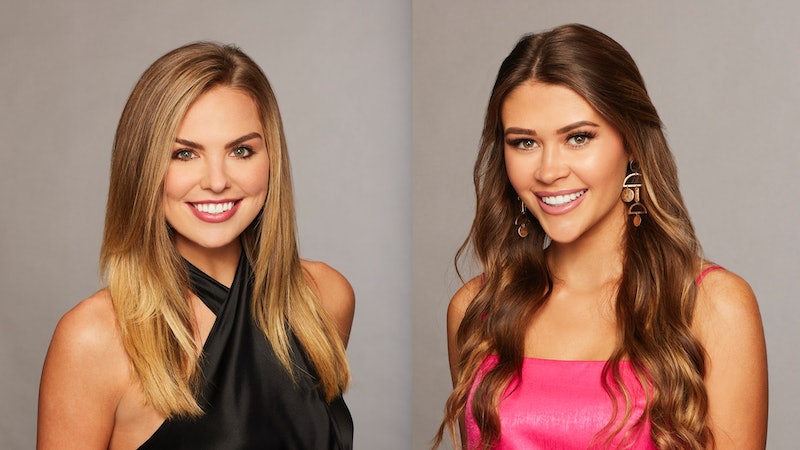 Give the Great Pageant Feud of The Bachelor Season 23 a polite beauty queen wave goodbye, because it sounds like Caelynn Miller-Keyes and Hannah Brown really have moved on. Caelynn's recent comments about Hannah B. suggest that the diplomatic conversation the two of them had on Colton Underwood's season of The Bachelor really stuck. Hey, nuttier things have happened in Bachelor Nation (you heard about a little fence jump, right?). Caelynn told Us Weekly that she and Hannah B. are “in a good place," adding that she's stoked that her former pageant roommate was picked to be the star of the next season of The Bachelorette.

“I’m super happy for her. She’s hilarious and completely herself, and I think we’ve never had a Bachelorette be so entirely herself. … It’s gonna be a different season just because you’ve never seen someone be so vulnerable and so authentically themselves.”

Caelynn also told Us Weekly that she thinks there will be an engagement at the end of Hannah B.’s season, and she believes Luke Parker, aka the first contestant introduced to Hannah B. at the After the Final Rose special, seems like someone who could win the whole thing.

The Ballad of Hannah B. and Caelynn began long before they first walked through the doors to the Bachelor Mansion. Hannah B. and Caelynn bonded while competing as Miss Alabama and Miss North Carolina, respectively, at Miss USA 2018. The future Bachelor contestants were not just in the same pageant— they also happened to be roommates at the pageant.

Caelynn recalled to Us Weekly,

“There was a time when Hannah and I were really close, and I was dating a guy that I thought I was gonna get engaged to, and we broke up, [and] she was talking me through that. And she talked about her breakup and how she was gonna get engaged, and if she was at that place a year ago, I feel even [more] strongly that she’s there more so now.”

So, what happened to their friendship? Well, according to Caelynn, their pageant bond was torpedoed by competition. Near the top of Colton's season, Caelynn said,

"We’re not necessarily the best of friends. We were roommates at Miss USA. We were super close, and then she wasn’t happy that I was first runner-up. She was mad she didn't place, for sure. There were a lot of hurt feelings. With Hannah, there's a facade and then it starts to crumble. Hannah flipped a switch. I was like, 'Wow, this is a whole new Hannah.' So being in this environment, it's pretty similar. I have no doubt that the switch will be flipped soon."

And uh, Hannah B. Regarding her frenemy, Hannah B. said, "It’s just so funny because there’s not one person in the world that I have a problem with, except [Caelynn]. It totally scares me for Colton … she’s fake." Eesh.

But hey, that's all in the past. Once upon a time, Caelynn and Hannah B. were pageant feuding all over Bachelor Nation, and now they are in "a good place." Time and fence jumps heal all wounds.