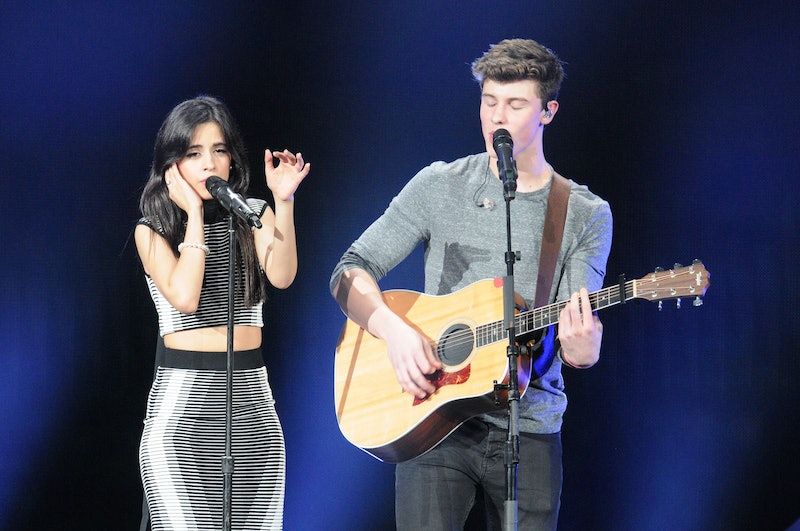 Fans know what Camila Cabello did this summer — send fans everywhere into a frenzy over her adorable, supportive friendships. On Friday, July 5, Cabello supported Shawn Mendes at one of his concerts on social media and fans everywhere can't stop freaking out over how cute their relationship is.

The "Havana" singer shared two videos from Mendes' Los Angeles show on her Instagram Story, gushing in the caption of her first post that her friend and frequent collaborator "couldn't be more amazing," along with a red heart emoji. In the second clip, Cabello zoomed in on Mendes singing on the jumbotron, adding "You're unreal. @shawnmendes."

As well as being incredibly sweet, Cabello's fangirling social media posts are doubly exciting in the wake of the former girl group member's split from Matthew Hussey, and reports that she and Mendes had finally become more than friends. According to E! News, the pair were photographed holding hands during a night out on Wednesday, before attending a Fourth of July party side by side the next day. Considering fans have searching for clues about a possible romance between the two for weeks now — including in behind the scenes clips of their "Señorita" video — Cabello's posts naturally kicked off a wave of freak outs from #Shawnmila shippers.

Cabello and Mendes are so aware of their fans' desire for them to get together; in a recent interview with V Magazine, Mendes revealed that it took 10 months to convince Cabello to release another single with him. "This is true. My fans are just absolutely gonna hate me now," she joked, adding, "They’re like, 'She’s so stupid.' Honestly, it just takes the right time for things to happen, I feel. You know?"

Regardless of how long it took to get Cabello on board with "Señorita," it's clear that the pair have had a strong bond since the very first time they met, while on tour with Austin Mahone back in 2014. "I remember thinking we met on the Austin Mahone tour, and I remember I wanted to hang out with you, but you were always on the tour bus, just learning guitar," Cabello told the magazine about her first impression of Mendes. "Yeah, that was me. I didn’t talk to anybody," Mendes responded. "You were the only person that talked to me. Like, you were the only one of everybody on that tour who would say words to me."

Her duet partner, meanwhile, was a little bit intimidated by Cabello when they first met, but was quickly won over by her fun-loving spirit. "I also thought you were crazy. Insane. ... I thought you were out of your mind. I’d be in my bus where no one could see me. I’d be looking through the window and I’d see you like, flying around on a scooter and jumping and doing cartwheels."

While Mendes' last official comment on his relationship status came back in August 2018, when he declared that he was enjoying the single life, it seems unlikely that the singer will share much more about his personal life. In April, Mendes told The Guardian that he doesn't appreciate speculation about his relationships, especially with regards to his sexuality. "For me it's hurtful," he explained. "I get mad when people assume things about me because I imagine the people who don’t have the support system I have and how that must affect them."

Regardless of whether or not Mendes and Cabello are dating — and whether or not the pair ever actually comment on their romantic status — her constant support of Mendes is incredibly sweet.

More like this
Hilary Duff's Husband Matthew Koma Has Her Name Tattooed On His Butt
By Jake Viswanath and Stephanie Downs
5 Wild Theories About Miley Cyrus’ “Flowers” Music Video
By Jake Viswanath
Britney Spears Shares & Deletes Photos Of Justin Timberlake From 22 Years Ago
By Jake Viswanath
Cruz Beckham Teased New Music With An Adorable Nod To Mom Victoria Beckham
By Stephanie Topacio Long
Get Even More From Bustle — Sign Up For The Newsletter
From hair trends to relationship advice, our daily newsletter has everything you need to sound like a person who’s on TikTok, even if you aren’t.