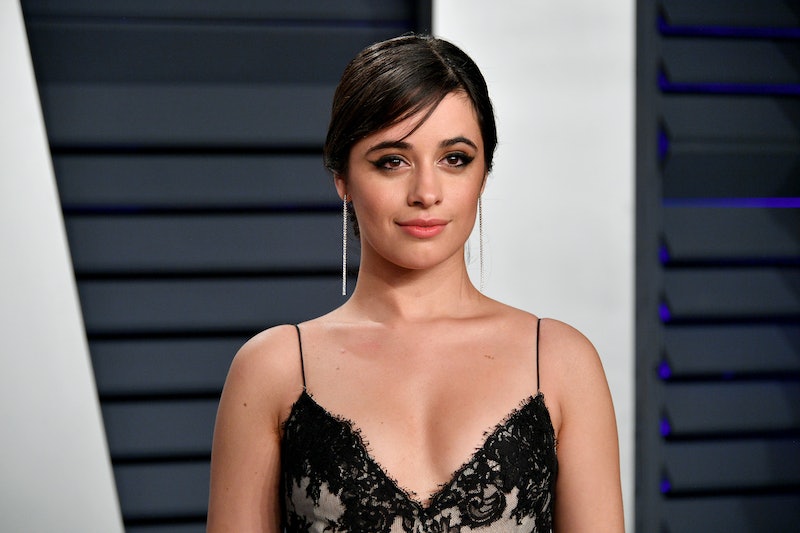 In 2019, nobody should have to put up with body-shaming. On Saturday, Camila Cabello shared a message for body-shamers on Instagram, and her post aims to take down the false idea of "perfection" that magazines and social media can perpetuate. Cabello went on her Instagram Story to talk about taking a break from social media to avoid negative messages. The singer revealed that while looking for a picture to share for the two-year anniversary of her hit song "Havana," she accidentally spotted a headline criticizing her body. She noted that while her first reaction was to feel insecure — her second was anger about the unrealistic expectations for women's bodies that social media sets, and how this might be impacting young women.

Cabello used her post to not only talk about her social media hiatus, but also to get honest about how it felt to read hurtful content about her body while online. She wrote:

"honestly the first thing I felt was super insecure just IMAGINING what these pictures must look like, oh no! My cellulite! on no! I didn't suck in my stomach! But then I was like....of course there are bad pictures, of course there are bad angles, my body's not made of f*cking rock, or all muscle, for that matter. but the saddest part of young girls growing up in an airbrushed world is they're seeking a perfection that's not real."

The Havana singer went on to say she was writing the post to help set realistic expectations for people like her sister, or other young women growing up looking at airbrushed social media photos. "They're constantly seeing photoshopped, edited pictures and thinking that's reality, and everyone eyes get used to seeing airbrushed bodies and airbrushed skin, and suddenly they think think THAT's the norm," she wrote. "It isn't. It's fake. AND FAKE IS BECOMING THE NEW REAL."

Cabello also shared how she was refusing to buy into the narrative of shame, and encouraged her fans to do the same. She finished her post by writing: "We have a completely unrealistic view of a woman's body. Girls, cellulite is normal. fat is normal. It's beautiful and natural. I won't buy into the bullsh*t today!!!! Not today satan. and I hope you don't either. Love only, camila."

The star finished her uplifting message with a heart emoji and a SpongeBob SquarePants GIF. Not only did the singer completely shut down her own body shamers, she managed to spin the negative headlines into a positive message for fans.

These days, Cabello has plenty more to focus on than hate online. In July, Cabello's collaboration with Shawn Mendes titled "Senorita" debuted at the top of the Billboard Hot 100. The singer is also at work on a follow-up to Camila, her 2018 solo debut. In June, Cabello tweeted about recording the second album, writing, "It feels really surreal and powerful that I can listen back to my life over the past year — I always get so insecure during the process and feel so much self doubt, but listening back I just feel like at the very least, I hear my f*cking soul in these songs."

Cabello is the latest celebrity to take down body-shamers online, and her Instagram Story was a powerful reminder that the image of perfection people see on social media isn't authentic. Nobody should have to see negative headlines about their body, and the singer deserves major props for using her experience to send a message of self-acceptance and positivity to her fans.