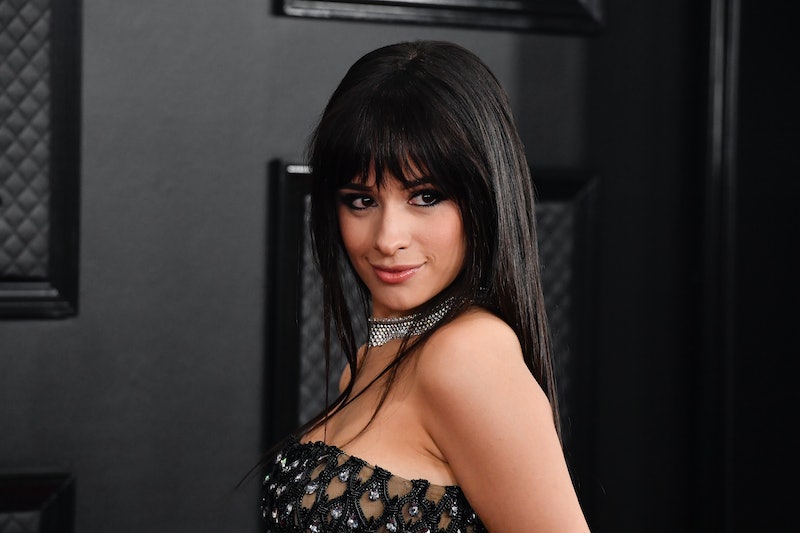 While the looks at the 2020 Grammys were show-stopping, one star showed up with a brand new hairstyle and basically shut down the red carpet. Camila Cabello's 2020 Grammys bangs made their debut, and the "Señorita" singer looked so different as she made her way into the awards show.

Between Lizzo's ode to old Hollywood glamour and Priyanka Chopra's impressive plunging, fringe gown, the 2020 Grammys red carpet was one to remember. While everyone else was focused on flowy frocks and blingy jewels, Cabello made a statement at music's biggest night with her brand-new 'do.

While the singer has had face-framing bangs for some time now, she appeared with a notably more wispy blunt style at the Grammys. The fringe fell to just below her brows, and she wore the rest of her long dark hair down.

While her bangs clearly stole the show, the Grammy performer's gown was nothing to balk at, either. Her black, nude illusion mini featured a straight, strapless neckline and glittering beads for added sparkle. At her waist, Cabello wore a black lace skirt that fell to the floor but allowed her short dress to be seen.

Cabello, however, doesn't appear to have actually taken the big chop. Later in the show, the artist performed and was back to her signature wavy locks and side-swept layers. If one had to guess, Cabello either pinned her own hair to appear as bangs or wore a set of clip-ins.

Whether Cabello's bangs were real or not, though, it's hard to deny that this hair moment may have been one of the biggest of the night.