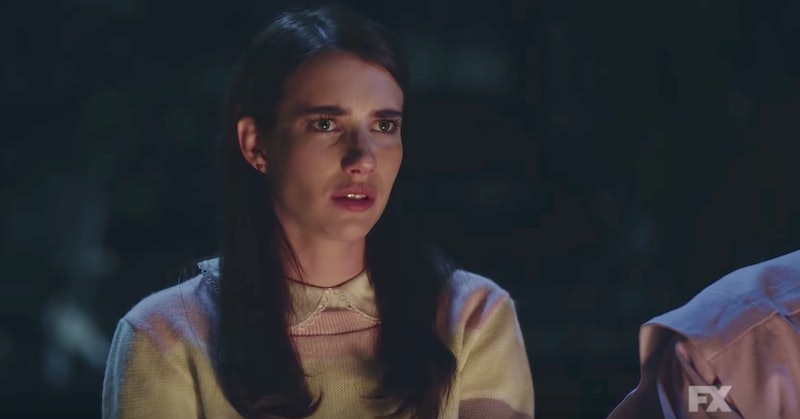 American Horror Story returns on Wednesday, Sept. 18 with a brand new theme and location. American Horror Story: 1984 is set at Camp Redwood and the theme of the season is '80s horror and cinema. And while creator Ryan Murphy has pulled from real life stories and places before, Camp Redwood isn't a real place, but it draws on some very realistic source material.

According to the show's official plot description, "In the summer of 1984, five friends escape Los Angeles to work as counselors at Camp Redwood." There are actually two Camp Redwood locations in California, but they seem to share only a name with the fictional AHS locale. One Camp Redwood is, predictably, a camp site lodging area. It's located in Oakhurst, California. The other Camp Redwood was an army outpost in 1862. According to California's military museum, Camp Redwood was set up to monitor tensions between the local Native Americans and the settlers who were in conflict. The camp was established so militiamen could accompany supplies and people between towns on the Coastal Trail.

AHS: 1984 is definitely not based on either of those Camp Redwoods, but it does heavily pull from its source material: '80s movies. Both the horror/slasher films and '80s comedy movie tropes will find their way into the series, based on the trailer. Movies in the '80s, even the scary ones, had their comedic moments that made them campy. Since AHS is doing literal camp, they better do '80s movie camp too.

The Wrap also noticed tropes like telling ghost stories around a campfire, hitting someone with your car, and tons of wacky '80s clothes and hairstyles. The soundtrack to the trailer also features '80s hits. Entertainment Weekly reported that the season also seems to be paying homage specifically to Friday the 13th in many ways.

Executive producer Tim Minear told Bleeding Cool that he thinks fans will love the new season's theme and references. "I think it's awesome. I think it's gonna be really scary but a lot of fun, like it always is," he said. "And that if you have a taste for '80s horror, you're in for a treat." Fashion may be all about the '90s right now, but TV is all about the '80s. AHS: 1984 is just one of a number of recent TV projects that are set in the '80s. Series like Stranger Things and Glow are both set in that decade as is one of Murphy's other projects Pose.

While some previous iterations of AHS were inspired by real locations (for example, AHS: Hotel was based on a real hotel and AHS: Roanoke took place in a real town), AHS: 1984 seems to be more focused on referencing a horror film genre than real horrific events. But that won't make it any less terrifying.