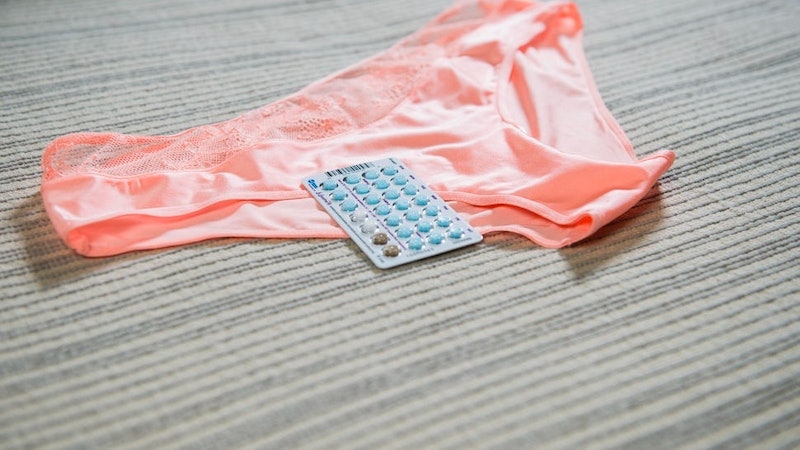 When I was in high school, one of my best friends had an unplanned pregnancy — despite the fact that she’d been taking the Pill. At the time she thought it was because she’d had a knee injury and was prescribed antibiotics after the surgery. I was incensed for years about the fact that no one had told us that antibiotics could mess with birth control. “How could they have kept such vital information from us??” I ranted, to anyone who would listen. But it turns out it probably wasn’t the doctor’s fault after all.

The short answer: Nope. Or, at least not because of the antibiotics. Turns out, there is an antibiotic that interferes with birth control — but you’re very unlikely to be prescribed it in 2019. It’s called rifampin and it’s prescribed for treating tuberculosis. Rifampin can affect the efficacy of the combined pill, the patch, the vaginal ring, and the implant, according to the UK's National Health Service. It sounds scary, but your risk of exposure to tuberculosis is low in the United States: The virus isn't very common here, so unless you traveled to a country where it's more common, are HIV positive, or work with at-risk populations, you're unlikely to get it. So, it’s unlikely that you’ll be prescribed rifampin — and it’s unlikely that that’s why my friend got pregnant when we were 15.

But if you are prescribed rifampin, here’s how it messes with your birth control. Rifampin is enzyme-inducing, which means it makes your liver process your birth control really quickly. Which means you have less of it in your system. Which means it’s less effective than it should be. Makes sense, right? But the current research suggests that this is the only antibiotic that does this. So if you’re taking another antibiotic for a week or two in order to, say, clear up a yeast infection, you should be fine.

Other Medications That Mess With Birth Control

While antibiotics have been taking the unplanned pregnancy fall for years, there are other medications that may actually be making your birth control less effective. Any medication that has vomiting or diarrhea as a side effect — or if you’re experiencing vomiting or diarrhea because of your illness — has the potential to make oral hormonal birth control less effective. That’s because if you’re taking it orally (in your mouth, into your stomach), then it could be coming back up or processed too quickly through your intestine to get enough of the hormones in your blood stream. Without those hormones at sufficient levels to block ovulation, you could ovulate and therefore could get pregnant if you have sex at the right time of the month.

And remember how I said that the reason rifampin messes with your birth control is because it’s enzyme-inducing? Well, it turns out it’s not the only one. Other drugs that are enzyme-inducing include Modafinal (which is used to treat some sleep disorders and also used as a "study drug," aka a drug some people take to help them focus), some epilepsy drugs (carbamazepine/Tegretol, phenytoin/Dilantin, primidone/Mysoline, phenobarbital), and some antiretroviral drugs that are used to treat HIV (Darunavir/Prezista, Efavirenz/Sustiva, Lopinavir/ritonavir/Kaletra, Nevirapine/Viramune). So if you’re taking one of those medications, consider either using back up contraceptives (like a condom) or switching to a new method altogether.

There are also some herbal remedies that may mess with hormonal birth control, though the research is light. A couple of studies suggest that St. John’s Wort, which is a homeopathic remedy that some people use to manage depression and other mood disorders, could reduce the efficacy of hormonal birth control. Others include saw palmetto, alfalfa, garlic pills, and flaxseed. Finally, there’s also some research that suggests that the antifungal medications griseofulvin (Gris-PEG) and ketoconazole (Extina, Nizoral, Xolegel) may also affect birth control, but this is another area with limited research. When in doubt, talk to your doctor about their recommendations or use a backup method.

Intrauterine devices (IUDs) are t-shaped objects that are placed in the uterus to prevent pregnancy. They’re super effective (even more effective than sterilization, believe it or not) and they come in two types. One, the copper IUD — which is sold under the brand name Paragard — creates a hostile environment in the uterus, because copper is toxic to the sperm and eggs.

The second type is the hormonal IUD, which is sold under a few brand names, including Mirena, Kyleena, Liletta, and Skyla. It releases a very small amount of the hormone progestin into the uterus over a few years, and the amount of time the IUD is viable depends on the brand. Hormonal IUDs make cervical mucus thicker (which blocks the entrance where sperm try to get in), thin the uterine lining, and they can (but don’t necessarily) stop ovulation.

They can also be a good option for people who have had bad reactions to other types hormonal contraceptives (like the Pill, the patch, or the shot) because the hormone level is very low and it’s localized to the uterus, not spread throughout the entire body. The IUD is also 99.9 percent effective at preventing pregnancy, according to Planned Parenthood.

No medication messes with condoms! Condoms are a great barrier method (meaning they physically prevent sperm from entering the uterus) that can be used either as a primary form of birth control or as a back up method if you’re worried something is making your main method less effective. They’re also an excellent choice if you’re concerned about STIs.

Two things that can make condoms less effective, however, is using an expired condom or using oil-based lube with a condom, both of which can lead to breakage. So check that expiration date and stick to water and silicone-based lube, please!

The diaphragm is a pretty old-school form of birth control — sometimes I believe I’m the only 30-something left who uses one. It’s a shallow cup made of silicone that you slather with spermicide and then insert into your vagina to cover up your cervix before penis-in-vagina intercourse. It’s not the most effective form of birth control — it’s 94 percent effective with perfect use and 84 percent effective with actual use — but that’s actually only one percentage point less effective than condoms are with actual use. And we haven’t stopped recommending condoms, so you be the judge.

So, question-asker, I hope that addressed your concerns. At the end of the day, most antibiotics won’t mess with your birth control. But it’s always good to talk to your doctor and pay attention to what might, and take appropriate action if you’re prescribed one of those meds.

More like this
The 19 Best Tweets & Memes About Bisexual Awareness Week
By Lexi Inks
These 4 Signs Are The Seductive Sirens Of The Zodiac
By Brittany Beringer
Are Quality Time & Gift-Receiving Love Languages Compatible?
By Lexi Inks
10 Creative Sexting Ideas That Don't Involve Nudes
By Lexi Inks
Get Even More From Bustle — Sign Up For The Newsletter