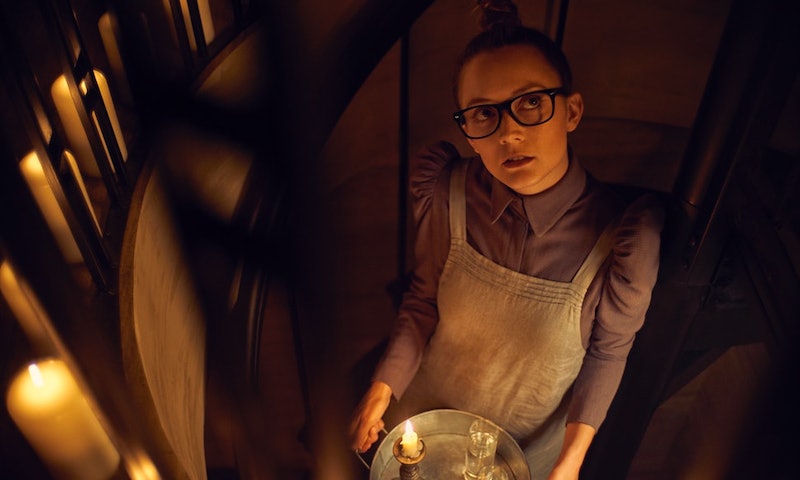 One of the great things about any given American Horror Story season is that nothing is rarely ever as it seems. For example, remember back when Mallory just appeared to be Coco's quiet little assistant and now she's quite possibly one of the most powerful witches on the planet who could ultimately save the world? Talk about a complete character turnaround. But can Mallory undo the AHS apocalypse altogether, thereby defeating Michael's demonic plan once and for all? The key to her success seems to lie in the discovery of her new time-traveling power.

During last Wednesday's episode, Myrtle Snow suspected that Mallory possesses an important power called "tempus infinitum," meaning that she has the ability to not only travel through time, but to also alter the outcome if she so chooses. It's a very rare power for any witch to have and all those who have attempted it died in the process. So in order to test Myrtle's theory, they had Mallory go back to the time of the Bolshevik Revolution in Russia to try and save a fellow witch's life. Unfortunately, she wasn't able to change history (the witch in question, Anastasia Romanov, and her family still ended up being killed), but the fact that she was able to go actually go back in time and survive the journey proved Myrtle's suspicions were right after all. So what does this mean going forward and how can it help Cordelia and the remaining members of the coven?

Though the plans they have in store for Mallory are somewhat unclear at this point, it seems logical to assume that they'll want to use Mallory's new power to go back to a time before Michael rose to power. They don't know yet that his actions will lead to the apocalyptic circumstances we witnessed at the beginning of the season, but they probably have a pretty good idea that the end of days is near.

With that in mind, they could have Mallory go back and prevent Michael from ever being born (which would explain why the promo shows another trip to Murder House). Or maybe she'll alter something so that Michael won't go down this dark path. Either way, it could end up saving many lives and also undo the tragic deaths of both Queenie and Zoe. Considering that the apocalypse is still two years away from when Mallory first discovers this power, that gives her plenty of time to hone this particular skill set and use it when the time is right.

It's hard to believe all of this will get resolved over the course of only one more episode, but according to Billie Lourd herself, who plays Mallory, her character will find some peace by the time the final credits start to roll. "The finale is so beautiful. I read it and actually cried, and it ties a beautiful little bow on the season," she said in an interview with Variety. "And it really is for the fans — I think the fans are going to be so happy because it answers all of the questions and is just so satisfying."

Granted, Lourd couldn't go into detail about anything specifically or whether or not Mallory is is able to prevent those missiles from being launched, but from the sound of things fans won't be disappointed with the outcome. Let's just hope Mallory is able to have better luck in any future time-traveling missions — and that it won't ultimately mean sacrificing herself for the greater good. Though, given that this is American Horror Story we're talking about here, it's probably best not to rule any possibility out.