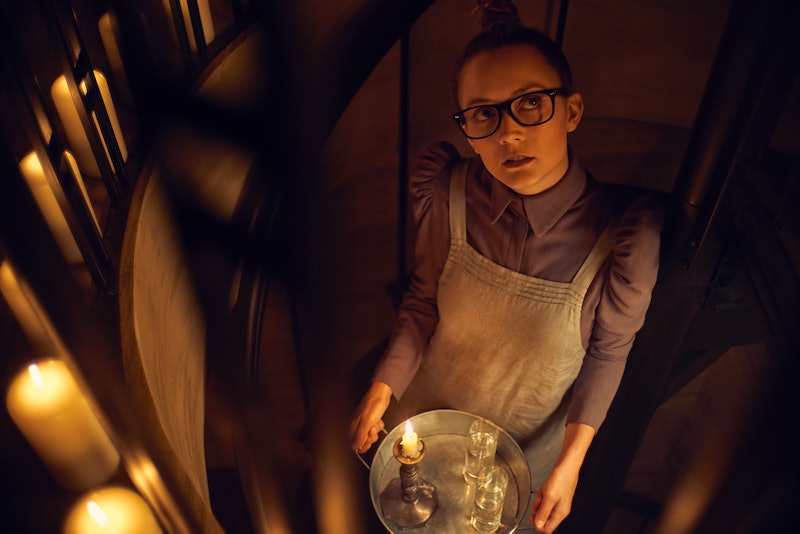 It's clear that everyone inside Outpost 3 is harboring a dark secret, but perhaps none so surprising as the hidden powers revealed by Coco's mousy assistant. The magic, fire-kindling abilities she conjured suddenly in Season 8's third episode certainly seemed to indicate that Mallory is a witch on AHS: Apocalypse, but if you're capable of making the Antichrist look like a scared toddler, than it's gotta be more than that, right? She's obviously hiding something freaky beneath that ridiculous up-do.

First, let's review some of the evidence. After Michael said that he could sense something powerful within her, Mallory explained that she often felt like something was trying to claw its way out from inside of her. And when he pressed her further — revealing his terrifying true face — Mallory freaked out, causing the fireplace to explode and fill the room with flames, much to the surprise of, well, both of them. Then, after Venable fatally poisoned all of the bunker's (human) inhabitants, Coven witches Cordelia Goode, Madison Montgomery, and Myrtle Snow came swooping in to resurrect their self-professed "sisters": Mallory, Coco, and Dinah. "Bet you thought you'd seen the last of me," Madison said to Mallory, invoking her famous Murder House catchphrase.

It's clear from that sequence that there is at least something suspiciously witchy about Mallory — but it may not be as simple as Mallory just being a witch. Her lines about feeling something trying to scratch its way out from within indicate a potential possession; perhaps Mallory has a witch inside of her without her knowledge. But who? The most common theory is that Mallory's body is somehow a vessel for Zoe Benson, the character played in Coven by Taissa Farmiga. Madison does seem familiar with whoever's inside Mallory, and she and Zoe were heated rivals. Plus, if Mallory is Zoe, then Dinah could be Queenie and Coco could be Misty, and basically all of Madison's fellow pupils would be accounted for. (Except for, of course, poor Nan.)

There's also a less popular (and more fun) theory that's been gaining steam as of late: that Mallory doesn't have a witch inside of her at all… but rather, an angel. An archangel named Michael, to be exact, as theorized on Reddit by user how_veryy. There's a nice ring to the idea that Michael the Antichrist will be pitted against Michael the Archangel, and perhaps when Langdon said he'd "gotten rid of" Mallory's kind, he wasn't referring to witches at all, but angels.

But I have another theory that I think makes more sense than a still-living witch or a celestial being taking up residence inside of poor Mallory. What if the person inside Mallory isn't Zoe (who was last seen alive and well at the end of Coven), but the former Supreme herself, Fiona Goode? It's already well-known that Apocalypse will mark the inimitable Jessica Lange's return to AHS for the first time since Freak Show. Considering that Mead was maybe-programmed in the image of Michael's adoptive mother, Constance, it would make symmetrical sense if Mead was harboring one of Lange's characters (from Murder House) and Mallory was harboring another (from Coven).

Remember who Madison initially spoke her meme-worthy catchphrase to back in Season 3? That's right: Fiona, who she was taunting after having returned from the dead. Now, after having apparently returned from the dead a second time (she was strangled to death by Kyle at the end of Coven), how delicious would it be if she was throwing those words back in Fiona's face again?

So is Mallory harboring Zoe, or Michael, or Fiona? And if it's the latter, how did the dead Supreme's spirit escape her personal hell of Knotty Pine and find its way into Mallory's body? There are so many questions, and Episode 4 better have a lot of answers.