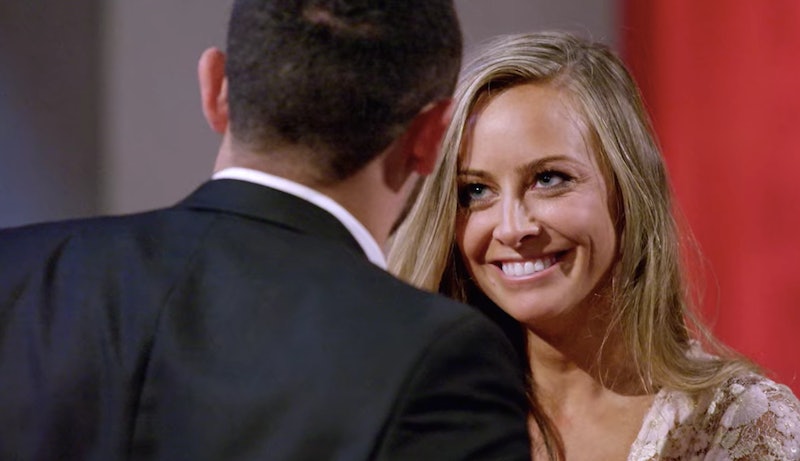 Sometimes the people who are good for you on paper just don't hit the same way in person. They could like the same niche Indie music as you, want to settle down in the same tiny town, and even take their pizza the same way (which is huge). Still, without that electric spark, the initial chemistry can be lacking. But can you learn to love someone who you aren't instantly attracted to? Or is it time to pack up your vision board and go home? Netflix's Love is Blind grapples with this very question. In the show's first season, Jessica Batten and Mark Cuevas fell hard for each other on their first few blind dates. The two technically had all the right things in common: a love of family, the desire to have three kids, a full-stop stan attitude toward the Chicago Bears. But when they met face-to-face, they struggled to move past their lapse in physical chemistry.

In true Love is Blind fashion, the newly engaged couple saw each other for the first time in the big reveal, and had to adjust their expectations to fit within the boundaries of their new reality as a couple. For example, Batten felt hesitant about their ten-year age difference and worried it might become a problem down the line.

According to experts, listening to your gut attraction isn't as superficial a practice as it may sound. "When looking at romantic relationships, if we solely use a business model of matching up on paper, we sometimes miss the very important pieces of gut instinct, emotional bonds, and energetic connection," Dr. Carla Marie Manly, a clinical psychologist, tells Bustle. "A person’s qualifications, goals, and values may fit all the right boxes in a relationship checklist, but be lacking in the energy and subtle nuances that makes the connection feel very real and right."

Batten and Cuevas see the consequences of ignoring their gut play out in real-time on the show. In episode 3, the two are sent on a romantic getaway to Mexico, and despite being in paradise with her supposed "perfect match," Batten still wasn't feeling any sexual desire toward her new fiancé. According to Manly, mismatched sexual compatibility can certainly be a red flag. However, intimacy can be built on the basis of intention, practice, and communication. But in order for the relationship to survive, a couple must be fully invested in putting in time and effort into building that foundation. "A relationship that is built on shared values and goals can be a very strong relationship in the long run," she says.

Ebru Halper, LPC, NCC, a licensed psychotherapist, agrees that it's possible to learn to love someone, despite a lack of initial chemistry. "I have worked with many couples where one partner was not initially physically attracted to their partner," she tells Bustle, "but something about their personality (funny, kind, smart, etc.) made them attractive." Focusing on the qualities, you admire in your partner can lead to a deeper emotional bond and sexual attraction over time. Additionally, seeing them in their element at work or social engagements can be telling. "They might suddenly seem more charismatic, engaging, appealing in ways you don’t experience in the confines of the relationship," Halper says.

While it might sound simple, experts say that the best way to push past an initial lack of chemistry is to keep an open mind. Avoid thinking of your perfect partner as a checklist of ideal qualities and traits. More often than not, the people in our lives are more complex than our five-year plans, and pro-con lists allow for.

However, if you decide you aren't willing to work on building your sexual compatibility, for whatever reason, it isn't necessary to force something that doesn't feel right. It's also OK to listen to your gut, rip up that metaphorical piece of paper, and walk away — which is ultimately what Batten chose to do. Whether you continue to feel turned off, or the odds of falling in love down the line feel increasingly unlikely, the choice remains up to you.