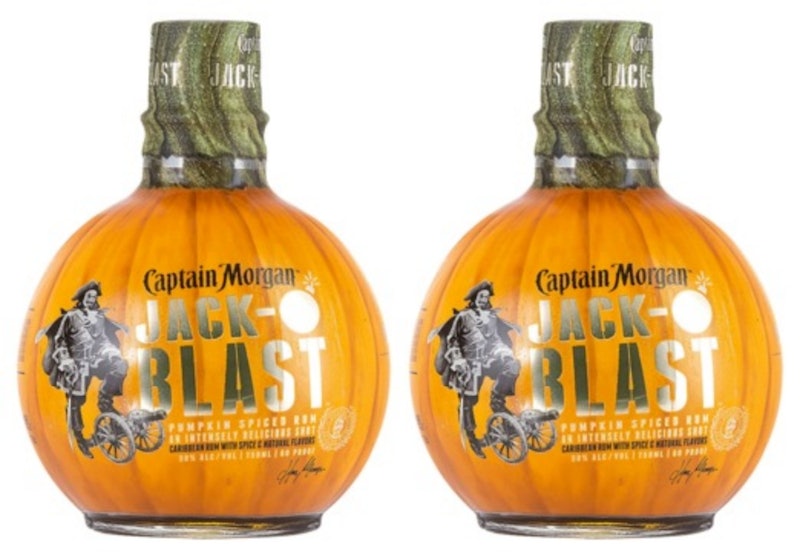 Is it too much to write about rum twice in one day? No? Excellent. Because hey, guess what? I just discovered not only that pumpkin spice rum exists, but also that you can get in a bottle that looks like a pumpkin. Naturally, it comes from Captain Morgan; it’s called Captain Morgan Jack-O’Blast, and it is the stuff of which all my autumnal cocktail dreams are made. Because, I mean, let’s face it: It’s August. I am over summer. I am so ready for sweater weather, it hurts.

(And yes, I realize that this is the second piece about a flavored Captain Morgan drink I have written before noon on a weekday. I swear I am not affiliated with the brand in any way — I just recently discovered a whole world of gimmicky rum drinks I hitherto had no idea existed and have decided to really lean into it.)

Jack-O’Blast isn’t actually new — I’m just really behind the times, apparently. It first made its debut in the fall of 2016 as a limited edition offering; at the time, Vice President of Marketing for Captain Morgan, Linda Bethea, said in a statement, “As much as we enjoyed tropical cocktails over the summer, it’s time to make room for the bold flavors of fall everyone enjoys. Captain Morgan Jack-O’Blast is a must-have for responsible adult consumers during their favorite seasonal activities, whether it’s at football tailgates, Halloween parties, or backyard bonfires with friends.” The drink made a triumphant return during the fall of 2017, and, well… now we’re three for three, aren’t we? Or at least, I'm assuming we are, since it's currently listed on the Captain Morgan website. Maybe we're not. I'll be sad if that's the case.

Although it’s not clear exactly what spices make up the “spice” part of “pumpkin spice” here, it’s easy to make a guess. Typically, “pumpkin spice” — which is really just pumpkin pie spice, or the blend of spices we most closely associate with that staple of fall dessert tables — contains some combination of cinnamon, cloves, nutmeg, ginger, and/or allspice; as such, it’s likely that Jack-O’Blast contains at least a few of those options, if not all of them. Indeed, product copy from the previous years’ releases describes Jack-O’Blast as combining “fresh pumpkin, cinnamon, and spice” — so, hey, at least we know there’s cinnamon in there, as well as actual pumpkin.

As for what it tastes like? General reviews range from "pretty darn good" and "sweet!" to “[Pumpkin Spice Latte]-worthy perfection.” The Rum Howler, however, published the most comprehensive review of the drink I’ve been able to find, so that's where to go for details.

At its initial 2016 release, site owner Chip Dykstra graded Jack-O’Blast on five different measures, ranging from “In the Bottle” to “The Afterburn.” At first sniff, Dykstra noted that scents of pumpkin, caramel, vanilla, cinnamon, and cloves are prevalent; on the palate, however, the cinnamon and cloves came to the forefront, although Dykstra also wrote that he suspected other warming spices like ginger, nutmeg, and allspice might be lurking in the mix, too. Ultimately, Dykstra gave it a score of 86.5 out of 100, calling it “a real nice October treat” and recommending it for straight-up sipping.

You might also think about making it into cocktails, though, if sipping straight rum — even the flavored variety — isn’t your thing. Captain Morgan has three recipes on their website if you need some ideas: The Funkins cocktail combines Jack-O’Blast with apple cider and ginger liqueur; the Pumpkin Spiced Shotte is essentially a boozy iced PSL made with Jack-O’Blast, Loconut coconut rum, and cold brew; and the Smashed Pumpkin offers a rum punch option if you need to feed a crowd. You might also think about making a “Mutiny Mule” — or just adding a bunch of whipped cream to the top in order to make a sweet and creamy shooter. You’ve got options, is what I’m saying, and they all sound good.

Not unlike Captain Morgan Apple Smash, though, the appeal of Jack-O’Blast isn’t just in the rum itself; it’s in the packaging. Like most of the Captain’s other novelty rum flavors, Jack-O’Blast arrives in a round, squat, 750ml bottle, rather than the tall, upright bottle in which the brand’s more standard varieties come — but it’s not just any round bottle. It’s designed to look like an actual pumpkin, completed with a weathered stem on top. Also, the “O” in “O’Blast” is formed by the cannon ball which has just been fired from the cannon on which the Captain stands posed. It’s not a cool as the pumpkin bottle itself is, but it's still a detail I appreciate.

Honestly, I would buy this drink just for the bottle.

Jack-O’Blast is typically only available during the fall months, so if you want to give it a shot this year, act fast — especially since there’s really no telling whether it will return again next year. I hope it does, though. Yes, I am basic. You can pry my pumpkin spice obsession from my cold, dead hands.

More like this
TikTok's Butter Board Might Be The New Cheese Plate
By Emma Carey
On TikTok, Tinned Fish Date Night Is The Latest Viral Food Obsession
By Emma Carey
10 Pumpkin Recipes That Are Way More Creative Than Pie & Lattes
By Rebecca Deczynski and Alexis Morillo
Deliveroo Is Selling Lotus Biscoff Cinnabons Now
By Darshita Goyal
Get Even More From Bustle — Sign Up For The Newsletter