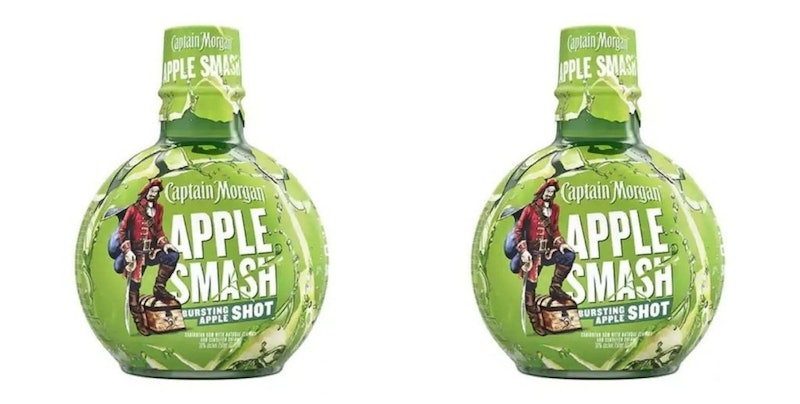 Boozy drinks that taste like candy can be dangerous; it’s incredibly easy to overdo it if you’re not careful. But they’re also delicious, as long as you drink responsibly — as Captain Morgan’s latest offering can attest: As Delish describes it, Captain Morgan Apple Smash tastes exactly like a Jolly Rancher — just, y’know, with a healthy slug of rum added. If you’ve been looking for a playful, throwback beverage to serve at your next (and maybe last?) summer barbecue, this might be the rum you're looking for.

Apple Smash isn’t the Captain’s first foray into fruity rums that taste like candy; Captain Morgan Watermelon Smash debuted back in March to great fanfare, drawing similar comparisons to the mighty Jolly Rancher. (Obviously, though, it was said to taste like a pink, watermelon-flavored candy, rather than a green apple one. Because, I mean… of course it did.) But while the product copy for Watermelon Smash specifies that it’s a limited edition item, that phrase is curiously absent from the product copy for Apple Smash. Could it be? Is Captain Morgan Apple Smash… permanent? We can only hope to be as fortunate.

The drink itself blends the Captain’s classic Caribbean rum with “a burst of green apple flavor,” which might make it palatable to folks who don’t generally drink rum straight-up. Indeed, the Captain Morgan website suggest serving it one of thee ways: As a chilled shot, as a mixed shot, or just mixed with club soda for a fizzy, candy-flavored cocktail. It’s also gluten-free, by the way, which is excellent news for anyone who either doesn’t or can’t eat gluten. For the curious, it’s bottled at 30 percent ABV.

But I haven’t told you the best part yet — and hilariously, it actually doesn’t have anything to do with how Apple Smash tastes. It has to do with how it’s bottled. Like many of Captain Morgan’s other flavored rums — among them Watermelon Smash, coconut-flavored Loconut, and citrus-y Cannon Blast — Apple Smash’s bottle is round and mocked up to look like the fruit that makes up its flavor profile: It’s designed kind of like a giant, Hulked-out apple. (Watermelon Smash similarly looks like a watermelon that’s bursting at the seams, while Loconut is coconut-shaped and Cannon Blast is… uh, cannon ball-shaped.) But the really spectacular thing isn’t even the bottle — it’s the label.

The label is scratch-n-sniff.

That’s right: When you scratch the label, it unleashes the scent of Apple Smash, granting you a short preview of what’s to come, should you decide to pour yourself out a shot. It is, as far as I know, the only Captain Morgan offering to have a scratch-n-sniff label. (Then again, I’ve only ever encountered one other boozy beverage with a scratch-n-sniff label — Cocomero’s rosé wine — so, uh, maybe that distinction isn’t quite as notable as it seems at first. Either way, though, I’m digging this whole scratch-n-sniff resurgence, so… just roll with it.)

Of course, it’s all well and good to say that Apple Smash tastes like an apple Jolly Rancher—but if you really wanted to test out that theory, you could get a little crafty: Make yourself some green Jolly Rancher-infused rum and perform a very scientific taste test, comparing and contrasting it with Apple Smash. The general instructions for making candy-infused alcohol are pretty easy; all you really need to do is combine the booze and the candy of your choice in a bottle and let it sit for a while. So, how’s about it?

There are a fair number of recipes for Jolly Rancher-infused vodka floating around the internet, which you could easily adapt for the purposes of making Jolly Rancher-infused rum; if you follow this set of instructions, for example, all you need to do is stick 20 green Jolly Ranchers in a bottle with a cup and a quarter of white rum and leave it alone for around four hours. (I’d leave out the sugar in the recipe, though; rum is literally made of distilled sugar, after all.)

Or, if you’d like to get a bit more precise about it, you could follow the guidelines laid out here, which suggests using two Jolly Ranchers for every ounce of alcohol and letting the mixture sit for a full 24 hours; then, after the 24 hours are up, strain the resulting candy-colored liquid through some coffee filters to get rid of any sediment that may have collected during the infusion/dissolution process.

Now if you’ll excuse me, I have a weekend science experiment to plan for — and some apple-flavored rum to acquire. Bottoms up!