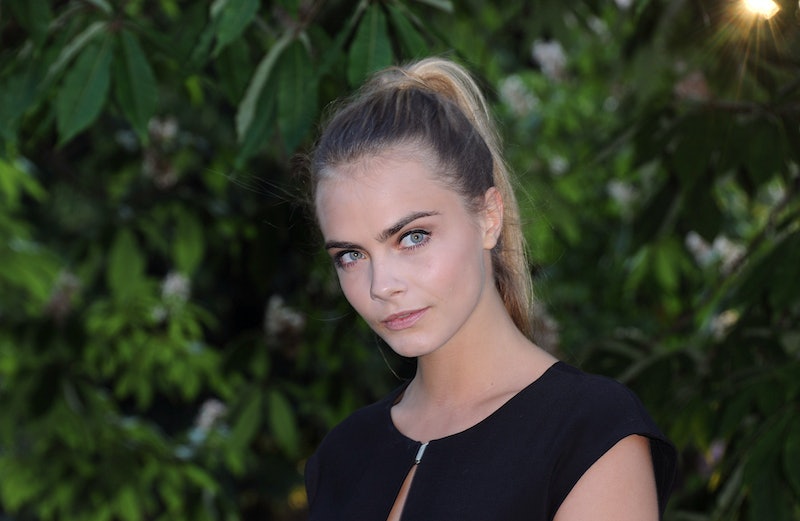 It Girl extraordinaire Care Delevingne is having a birthday! The oh-so-fabulous model turns 22 on August 12th, and she's already way more famous than most of us will ever be. So famous, in fact, that she can sleep through a Vogue interview and still wind up on the cover of British Vogue 's September issue a few months later.

What is it about Delevingne that's so bewitching? Might it be her penchant for making (and documenting via Instagram) hilarious faces? Her ability to smolder on camera? Her blatant hatred for her own modeling career? I'm going to argue that none of these things are the true key to Delevingne's success. What is it then? Her t-shirts! Girl has major t-shirt game.

Have you ever seen a model with such laid back off-duty style? Delevingne's street looks often exude an air of "I threw on the first clean thing I found" in a way that only really works for top models and insouciant teenage boys. And she always looks killer. What could be more timeless than a t-shirt and a pair of kicks? It could be 1999 or 2025 and Cara would always look modern. That's part of her charm.

The hat and the shirt are on-point, but the saggy white shorts kill the mood.

Very trendy, but not quite unexpected enough to top the list.

Love the juxtaposition between Delevingne and her bikini-clad companion here.

The Kiss shirt is a bit predictable, but DVF always makes for the best accessory.

This would be higher up on the list if it wasn't so terrifying.

Not sure if this counts as a t-shirt but come on — Bart Simpson!

The red lipstick and classy trousers are strange bedfellows with this raunchy tee but somehow it works.

The most badass logo tee around.

1. Get Your Brown On

Do I need to explain this one?

More like this
Twitter Can’t Get Enough Of Lewis Capaldi Creating Fashion Looks For ASOS
By El Hunt
Here Are All 703 Outfits Rachel Wore On Friends
By Kat George
Dua Lipa On YSL Beauty, Plus Her Fearless Approach To Hair & Makeup
By Erin Stovall
Kendall Jenner Wore A $38 Sweater & Sports Bra For A Chic Workout Fit
By Allie Fasanella
Get Even More From Bustle — Sign Up For The Newsletter