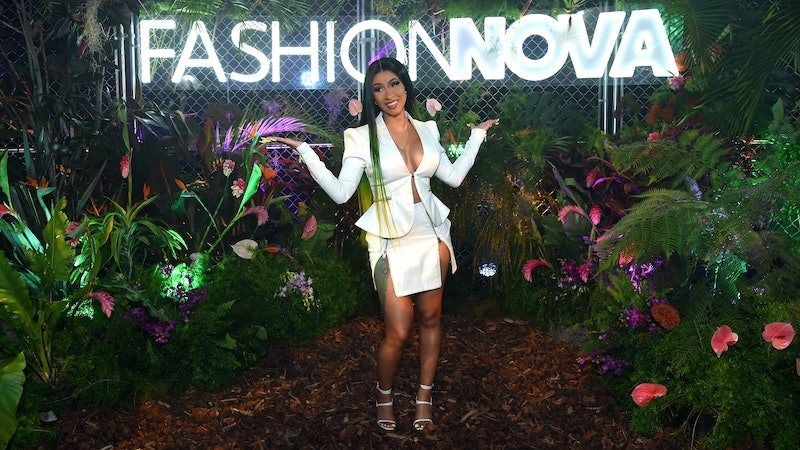 Cardi B has proven that she knows exactly how to shut down any red (or pink Met Gala) carpet as soon as she steps onto the scene. The spotlight seems to come naturally to the rapper, and that’s likely because she’s never been afraid to showcase her personality through her clothing choices. And on Wednesday, the chart-topping musician gave her fans yet another chance to rock some Cardi-inspired looks with the launch of the Fashion Nova x Cardi B collection, which is available in both straight and plus sizes.

This marked the Grammy winner’s second collaboration with the brand; but instead of coming back with another fall/winter wardrobe, she mostly skipped the fur this time around and created more summery styles. She also added some nostalgic elements of the '80s and '90s, such as vegan leather, latex, and color block details — all very reminiscent of her "Finesse" music video with Bruno Mars. Fans were likely also happy to know that Cardi continued naming her clothes after her catchy lyrics like the "Drip Drip Biker Shorts" and "I'm Livin' My Best Life Denim Set."

But despite the success of her previous Fashion Nova partnership, coupled with her ever rising stardom, Cardi still admitted that she was nervous about how the line would be received. “I don’t know how people are going to react to it,” Cardi told Bustle prior to the launch. “I hope they love it. It’s hard when you do something that you think is so good and someone tells you it’s not. I hope that doesn’t happen to me.” However, much like her first drop, nearly everything sold out just a few days after its release — proving that the rapper's still got the magic touch when it comes to creating clothing people love.

But even if things hadn't gone as planned, Cardi has made it clear that she's someone who knows how to handle critique, especially when it comes to her clothing. Recently, she clapped back at internet trolls who photoshopped and teased her for a slight wardrobe malfunction at this year’s Billboard Music Awards. She also didn't hold back when people were calling her out online for being "too extra" at the 2019 Met Gala. “A lot of people were saying 'Oh she’s doing the most,’” the artist shares with Bustle. But in true Cardi style, she naturally embraced the shady comments and simply pointed out that being "too extra" was the whole point of the camp theme. “Well duh, b*tch," she adds. “The sh*t is doing the most.”

By now, it's likely pretty clear to many that being over the top is a part of Cardi's aesthetic, and something many of her fans love about her. So, of course, this was an element she wanted to bring to the clothing. But for anyone who loves the musician, but may have a more subtle sense of style, she says there's a little something for everyone. “You can still go out or go to the office in certain pieces,” Cardi says, reiterating the versatility of her collection. Although, don't expect her to pick favorites when it comes to her latest creative baby, because when asked which piece was her favorite, she couldn’t even narrow one down. “It’s really hard, I actually like all of them,” she says. “There were a lot of pieces that were sketched out and I scrapped the ones I didn’t like, so everything in the collection I like.”

This type of creative freedom is one of the reasons why Cardi says she loves teaming up with Fashion Nova, and why she decided to work with them for the second time. “It’s almost like we’re family,” she explains. “They understand everything that I like. I just love them and I think it's very affordable." On the topic of family, while the mother-of-one is definitely a fashion maven, she keeps things very real by admitting that she's one celeb mom who isn't worried about what her daughter Kulture is wearing just yet: "All I have to say is she be dressed up and she throws up on it, or dirties it, and we have to change it again."

Hopefully there's more to come from Cardi and Fashion Nova in the future, but even if you missed out on this collection, TMZ suspects that the retailer may continue selling some sold out items soon!