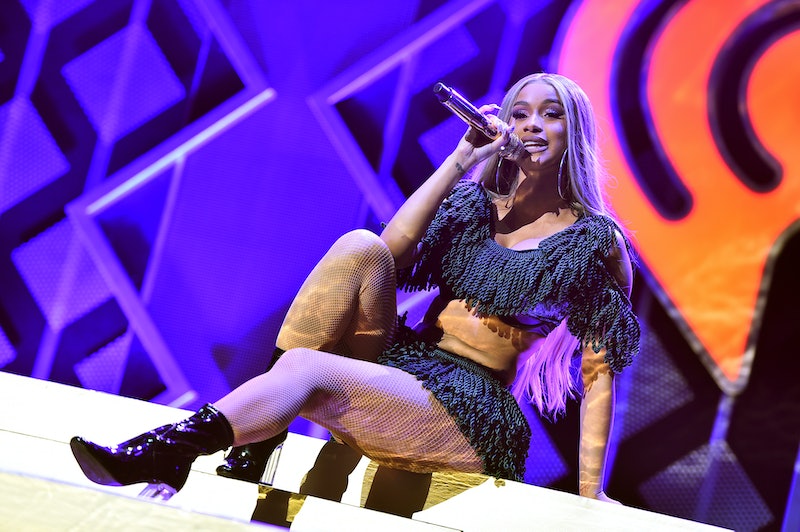 Fashion can be, well, painful. Maybe your heels are just a bit more uncomfortable than you expected or maybe it's that stupid wire in your bra that you want to rip out with a pair or plier, whatever it is, it's not fun. That's probably why Cardi B stopped a concert to fix her wedgie. Yes, really, and honestly, it's too real and too relatable. Let's be honest, no one wants a wedgie.

According to Buzzfeed, Cardi was performing in New Zealand during the New Year holidays, and clearly, she had a good time. In fact, she posted her own videos to her Instagram account and has been giving fans a gorgeous look at the country via her stories. While she was performing there, she looked incredible. Cardi was rocking a gorgeous emerald sequin body suit with long ruffled sleeves and ruffles around her hips. As per usual, she looked like the queen that she is. There seemed, however, to be a bit of wardrobe malfunction according to the "I Like It Like That Singer," and she wasn't shy about letting the crowd know.

In a video posted by fan Shayden Taylor, Cardi can be seen and heard telling the crowd, "Anyways, yall, I need a little break. I'll be right back. I gotta take this wedgie out my ass." She then turns and runs off stage.

Let's be honest, who can blame her? If you've seen Cardi B perform live or even seen her perform at award shows on television, it's no secret that she's invested in her performances. She's dancing, rapping, and interacting with the crowd. She's doing a lot, and no one want to do it with a wedgie.

As expected and according to the Taylor's video, Cardi did return and finish her set. A wedgie can't keep this superstar down! It also wasn't even the only candid moment from the rapper at the show.

In another video posted by Taylor, you can hear Cardi react to the fireworks on stage at the end of her set saying they scared her. Basically, if she feels it, she says it, and that's why people love her.

Let's be honest. It's also far from the first time that Cardi B has said something candid that made fans laugh. Perhaps one of her funniest moments happened when she co-hosted The Tonight Show with Jimmy Fallon. During one particular segment called Box of Lies, Cardi pulls a box from a shelf that features well, two fluffy balls in a fence, kind of like those faux ferrets in toy stories from when you were a kid. She either has to lie about the box or tell Fallon the true about what's inside.

When Fallon asks what's in her box, Cardi matter of factly replies, "Not a penis." If that weren't enough to have you tearing up from laughter, Cardi doesn't actually know what the item is (who would?) and has to make up a name for it. The name? Pussy balls. This, my friends, is why everyone loves Cardi B.

Whether Cardi B is telling her fans about her wedgie, joking with Jimmy Fallon, or just being her charming self, it's hard to deny just how lovable and relatable this superstar is.