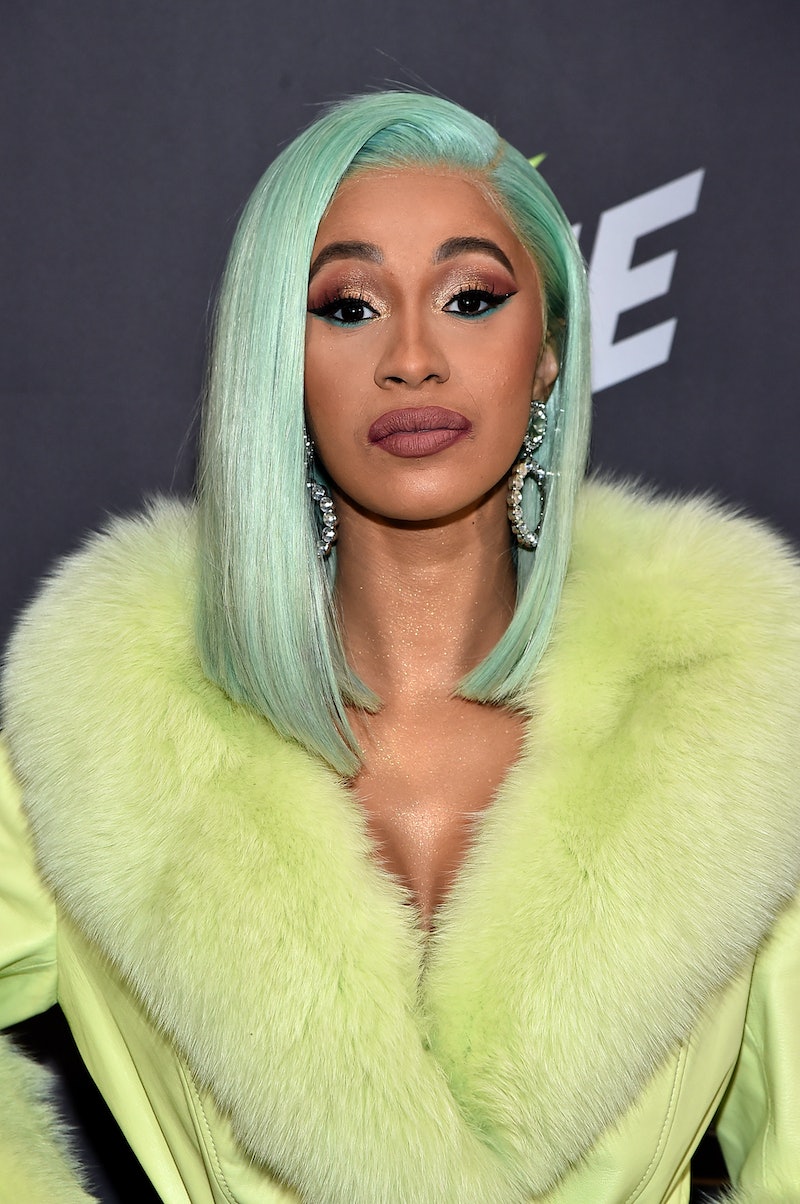 As the March cover star for Harper's Bazaar, Cardi B reflected on her postpartum depression in a candid way, and it's not the first time she's touched on how she's felt after giving birth to her daughter Kulture last July. Cardi B's comments are beyond honest, while also shining a light on the dark time the rapper has faced. While admitting to the publication that she isn't breastfeeding her baby girl because "It was too hard," the Invasion of Privacy artist opened up about her postpartum experience overall.

In addition to admitting a good amount of time post-birth was spent in a haze, she told the magazine,

"I thought I was going to avoid it. When I gave birth, the doctor told me about postpartum, and I was like, 'Well, I’m doing good right now, I don’t think that’s going to happen.' But out of nowhere, the world was heavy on my shoulders."

The "Money" rapper didn't stop there and revealed that she still notices her body isn't completely back to 100 percent, or how she felt prior to giving birth. Cardi B explained,

"I feel like I don’t have my balance right yet. When it comes to heels, I’m not as good at walking anymore. I feel like I’m holding a weight on me. I don’t know why because I’m skinnier than I’ve ever been. But there’s an energy I haven’t gotten back yet that I had before I was pregnant. It’s just the weirdest thing."

This isn't the first time the 26-year-old's discussed her battle with postpartum depression. On Aug. 8, 2018, a little over a month after Kulture arrived, Cardi B reposted a video from Jay Versace, in which the comedian spoke to his inner self, aka his reflection. He said in the video, "I don't know who I am anymore," and his inner self responded, "Wait, what do you mean by that? If you don't know who you are, how am I supposed to know?!"

Cardi B captioned the video, "This is how postpartum got me. The emotional struggle. BARDI vs BELCALIS." (Her real name is Belcalis Almanzar.) At the time, according to Elite Daily, she also posted on her Instagram Story, "This postpartum sh*t is annoying. Like I been emotional all f*cking day for no reason."

Prior to that on July 26, Cardi revealed she wasn't touring with Bruno Mars anymore, because she was still recovering "mentally and physically." To be clear, she never mentioned "postpartum depression" in her message, but she did write,

"Not only am I just not ready physically, I'm not ready to leave my baby behind since the doctors explained it's not healthy for her to be on the road. I hope you guys understand that this decision has been the hardest to make but I have to do what's best for myself and my baby! Thank you Bruno for being so supportive and understanding."

Mars supported Cardi B entirely and wrote the most sympathetic message that he shared on Instagram. Part of his statement read, "You are absolutely doing the right thing. I also know we'll share the stage when the time is right. We love you Cardi and we will play 'Bodak Yellow' every night in your honor."

Cardi B is known for being honest, and that's exactly what she's been when discussing her postpartum depression. As hard of a time that she's had, her ability to open up about something so difficult has not only been brave, but has also most likely helped other mothers going through the exact same thing.