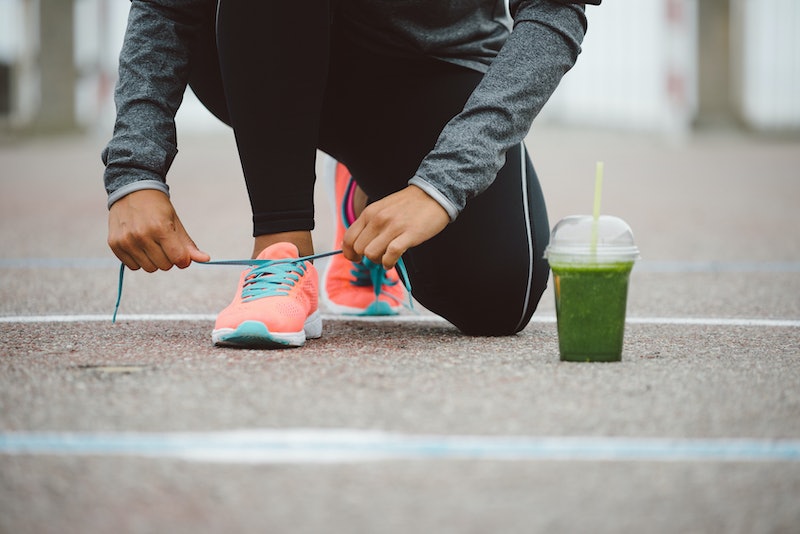 It's super frustrating when people tell others with depression to exercise more to feel better. But somehow, these arguments keep coming back. Turns out, this cliché is rooted in scientific links between exercise and depression that show movement is effective in symptom relief. While unwarranted advice is a no-go, a new (and massive) study published in Depression and Anxiety has found that cardio actually has real antidepressant treatment effects.

The new meta-analysis, published on Oct. 18 in the journal Depression and Anxiety, found across 11 trials and 455 patients that aerobic exercise can actually improve depression symptoms. Basically, aerobic exercise is cardio — any exercise that requires the pumping of oxygenated blood to your heart. And matter how high or low intensity, aerobic exercise helps.

Previous to this study, the association between depression relief and exercise hasn't really been understood. Exercise can help boost your mood, but scientists didn't have much data that it could actually help those diagnosed and dealing with the symptoms of clinical depression. By comparing non-exercising adults who are in therapy or using antidepressants with unmedicated patients diagnosed with clinical depression who go through a regulated exercise regimen, this study has found a concrete link. The treatment that involved exercising moderately for 45 minutes at a time, three times a week, over a nine week period showed a significantly large overall antidepressant effect compared with more traditional methods.

These positive findings stayed positive regardless of whether the patients studied were in inpatient or outpatient therapy, or whether they tried exercise routines for nine weeks or four. Previously, studies have struggled to find what exact amount of exercise shows measurable results, but this study shows that 45-minute periods of moderate movement might be the best amount.

The findings of this study do not mean that getting up and walking will cure your depression (contrary to what the faux Twitter experts might say). Rather, regulated exercise as part of a treatment plan is effective in symptom relief. "Collectively, this study has found that supervised aerobic exercise can significantly support major depression treatment in mental health services," said lead author Dr. Ioannis D. Morres, of the University of Thessaly, in a press release.

Scientists are still trying to figure out what amounts of exercise, at what level, and how much, can actually help depression. Previously, a study in the American Journal of Psychiatry found that just one hour a week can help symptoms. Unfortunately, getting up and moving even one hour can seem insurmountable for people with depression. Three times a week for 45 minutes each, over a nine week period, may seem even more daunting.

In the bigger sense, this study is part of a major scientific movement to get to the root truth underneath all those clichés about how exercise helps depression. But if you are dealing with a depression diagnosis, it's not your responsibility to try to copy the findings of every scientific study.

The relationship between exercise and symptom relief is a bit complicated. "More exercise wasn’t always better,” Dr. Adam M. Chekroud, PhD, one of the authors in a study on how walking can improve your mental health and Spring Health’s Chief Scientist and cofounder, told Bustle for a previous article on mental health. Chekroud's research showed that exercising over five times doesn't help regulate people's number of "bad mental health days" the way three days a week might. And his study's findings also showed that mindfulness exercises — specifically, yoga and tai chi — were also associated with a mental health boost.

But incorporating whatever movement as you feel comfortable with, however, might actually improve your mood — and even potentially regulate your symptoms. So if you are dealing with depression, the findings of these studies shouldn't suggest that you need to all of the sudden change your lifestyle vastly in attempt to feel better. Instead, they can be another piece of evidence that talking to your medical team about how incorporating a little bit of movement into your treatment plan — alongside psychotherapy and medication — might be a good idea.