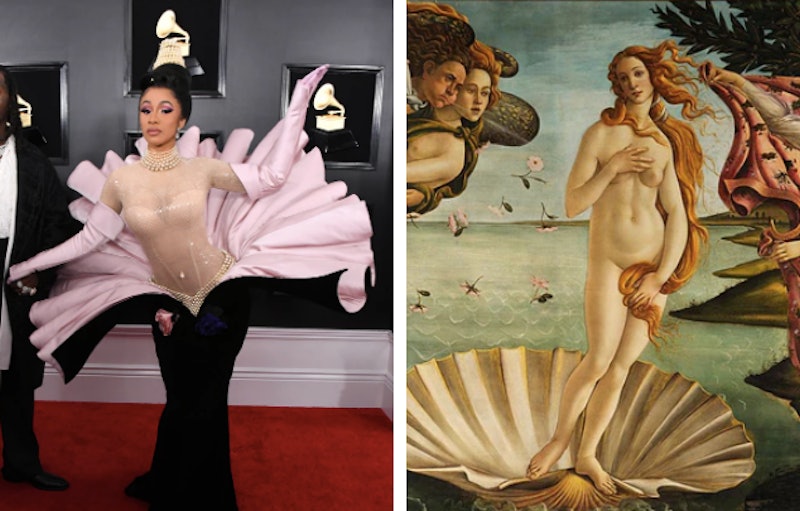 Here's the thing about the Grammy red carpet and the show itself: Musicians, rappers, singers, songwriters — the whole lot of them know how to serve a lewk. Cardi B's 2019 Grammy red carpet dress was certainly no exception. The "I Like It" singer and hand-to-the-sky cultural icon knows how to come to a red carpet and made it hers. That's exactly what she did at the Grammys when Cardi B embraced Botticelli's Birth of Venus.

At tonight's show, Cardi has a plethora of nominations (five, to be exact) and they're for some of the night's biggest categories. The rapper is up for Record of the Year for "I Like It," Album of the Year, Best Group Performance for her work on Maroon 5's "Girls Like You," Best Rap Performance for "Be Careful," and finally, Best Rap Album. Kind of a big deal, right? That's not the only reason the artist is here tonight, though. She's also performing. If you were hoping for a Cardi B centric night, you're getting it.

Tonight on the Grammys red carpet, Cardi B may as well have had her first performance. The singer's Grammy red carpet dress was basically a full on oyster shell with her emerging from the inside covered in pearls, and it was perfect.

Basically, if The Birth of Venus and a mermaid had a baby, it'd be Cardi B tonight at the Grammys.

Cardi's look was topped off (literally) with a gorgeous pearl bun perfect for the theme of her look. The gorgeous style was courtesy of talented artist Tokyo Stylez with Suave Professionals.

Although, the pearls weren't her only jewelry, she also just happens to be wearing 28 carat white diamond earrings from Gismondi 1754. NBD, right?

Of course, tonight isn't Cardi's first time at the Grammy Awards nor her first time performing at them. Last year, she hit the stage with Bruno Mars and performed their mega-hit "Finesse." As for what Cardi B will perform tonight, there's no way to know yet, but given that her hit "I Like It" is nominated, it's a strong contender. Then again, fans should keep in mind that her entire album Invasion of Privacy is also nominated, so really, anything is game.

While Cardi's appearance at any award show is always exciting, her performance and red carpet walk are especially timely for fans who didn't get to see her perform at last week's Super Bowl. While the rapper was offered the job, she ultimately decided to turn down the NFL in order to fully support Colin Kapernick. According to People, she told The Associated Press that the decision to turn down the gig was difficult because her husband, Off Set, is a huge football fan, "But there’s a man who sacrificed his job for us, so we got to stand behind him.”

Don't worry, though. Fans still got to see the rapper during the game thanks to her role in a clever Pepsi commercial. Cardi starred in the ad which took its okay spin on the question of, "Is Pepsi okay?" Of course, Cardi answered with her famous okurrr catchphrase and some ASMR-like tapping on a Pepsi can with nails that held over 500 crystals. Yes, really.

While Cardi may not be wearing 500 crystals on her nails tonight (or is she?), the singer definitely still wowed on the red carpet thanks to her incredible look. Although, did anyone expect anything less? She is Cardi B after all.