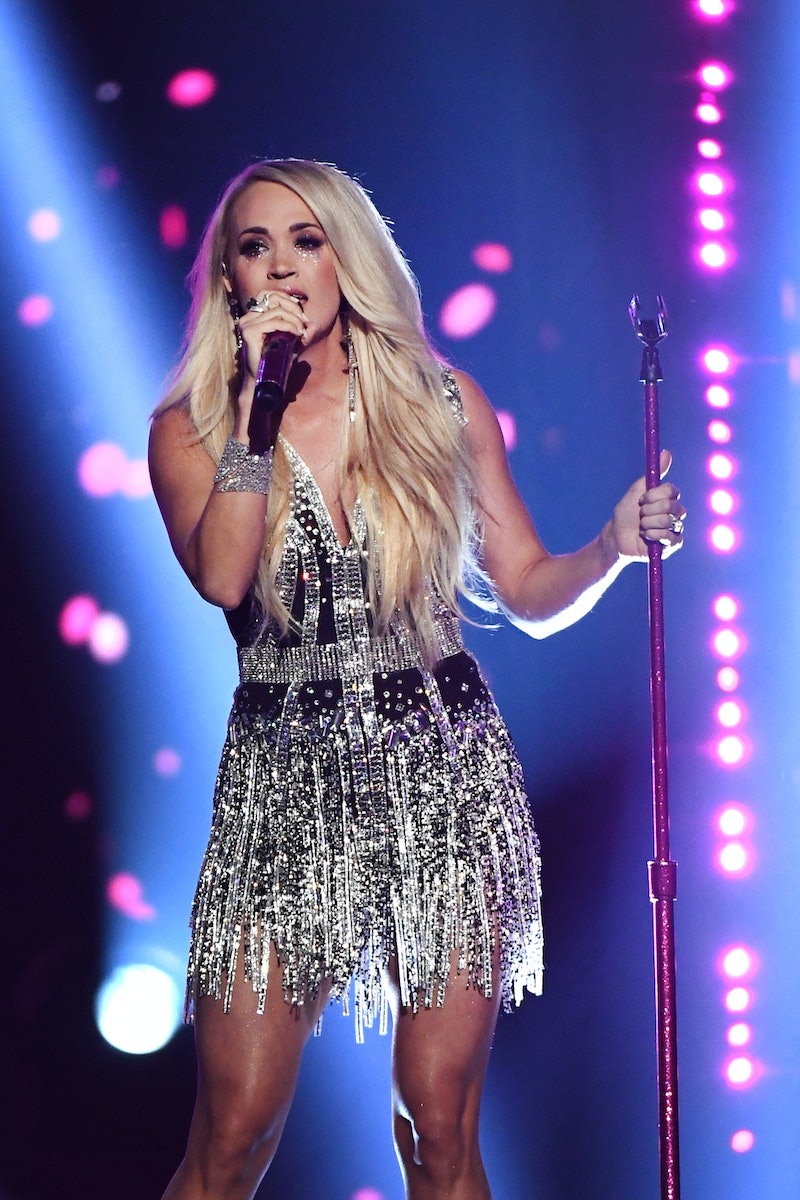 As Carrie Underwood so frankly acknowledges in the opening verse of her latest single "Cry Pretty," the 35-year-old singer is usually pretty good at keeping it together. But per the emotional track's subsequent lyrics, it sounds like she's favoring candidness over composure these days. Underwood's new music video for "Cry Pretty" feels like a testament to that real-life shift in thinking — a shift that was, ostensibly, catalyzed by a freak accident last November, which left Underwood with a broken wrist and 40 stitches in her face.

The video for "Cry Pretty" is Underwood's first since recovering from last year's accident. And in a lot of ways, both the song and its accompanying video seem to have been informed pretty obviously by that experience. The video — which cuts between shots of Underwood sobbing in the shower and then bravely returning to the spotlight — seems to mark a sort of departure, on Underwood's part, from a generally self-assured musical voice (take her recent Super Bowl promo single "Champion," for example) to a much more overtly honest one.

As those who have seen it could probably tell you, Underwood's "Cry Pretty" video, more than anything else, proves there's immense strength in vulnerability.

"I apologize if you don’t like what you see," Underwood croons through the heartrending track's first verse, staring directly into the camera during a series of close-ups that couldn't have been easy for her to shoot, given the extent of her recent facial injuries. And in the spirit of embracing vulnerability (and transforming it into strength), the song continues with a string of lyrics that'll probably resonate pretty firmly with anyone who's ever faced a challenging, and potentially life-altering, set of circumstances. To that end, Underwood's bold wisdom in "Cry Pretty" sound like a liberating rallying cry: "Falling apart is as human as it gets / You can't hide it, you can't fight what the truth is."

Underwood revealed a "first look" at her new music video during Sunday night's American Idol episode on May 6. A former Idol winner herself, Underwood announced the upcoming video in a tweet before the show Sunday evening, writing, "Watch @AmericanIdol tonight to get a worldwide exclusive look at my new music video for #CryPretty !! Live show starts at 8e|5p on @ABCNetwork."

Almost paralleling the events featured in the "Cry Pretty" video, Underwood made her triumphant real-life return to the stage (for the first time since the accident) back in April, when she debuted the emotional track with an equally emotional live performance during this year's ACM Awards.

In the aftermath of November's accident, Underwood had been lying pretty low, as far as public appearances were concerned. In January, she broke what had been, for the most part, a several-month silence, revealing the details of November's bizarre accident via a note to her fan club. The note was later acquired by People and showcased in its subsequent report. It was in this note that Underwood, who had previously revealed that the accident left her with a broken wrist, revealed that she "somehow managed to injure [her] face as well." According to People's report, Underwood's note continued:

"I'll spare you the gruesome details, but when I came out of surgery the night of my fall, the doctor told [Underwood's husband] Mike that he had put between 40 and 50 stitches in. Now, here we are 7 weeks later, and even though I've had the best people helping me, I'm still healing and not quite looking the same."

Later, during an April appearance on iHeartRadio's The Bobby Bones Show, Underwood chronicled, in a bit more detail, exactly how the accident actually transpired. "I was taking the dogs out to go pee one last time, and I just — I tripped," she explained, "There was one step, and I didn't let go of the leashes! Priorities! So that's why my left hand's fine. But I went to catch myself and I just missed a step."

Perhaps we can all take a note from Underwood's bravery in the new "Cry Pretty" video. After all, baring your insecurities for the world to see — celebrity or not — is far from easy. But as Underwood's new video confirms, sometimes, it's worth it.