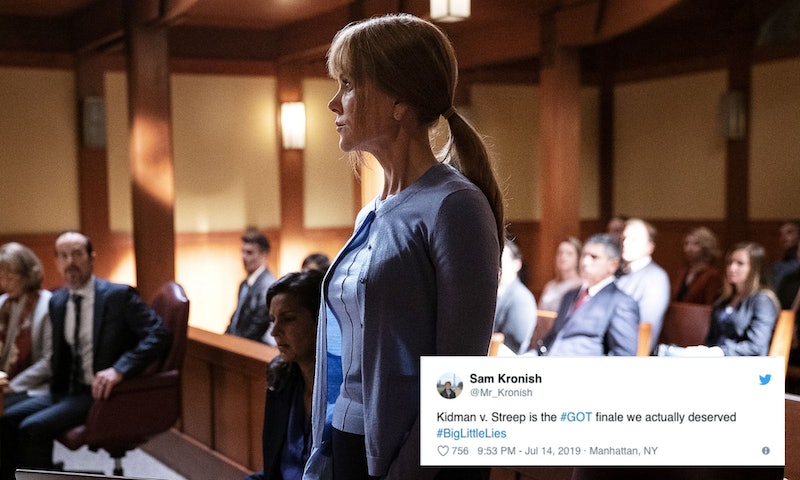 Spoilers ahead for Big Little Lies Season 2. The Big Little Lies Season 2 finale just got even more interesting. After Celeste was interrogated in court about every aspect of her life — Perry's abuse, her sexual history, her recent dependency on Ambien — the judge was ready to present her decision about the twins' custody case. But Celeste had one more shot to fire: before all is said and done, Mary Louise will take the stand to determine her own fitness as a mother, and Celeste will be the one asking the questions.

Considering Mary Louise raised Perry, who physically abused Celeste and sexually assaulted her friend, you can bet that Celeste will have a lot to say. And based on Twitter, Big Little Lies fans are ready for the showdown of the century: two A-list actors facing off against one another in what will likely be a tour de force performance. "It's fireworks. It's an amazing scene and of course, it's what everyone wants to see: Meryl Streep on the stand being cross-examined by Nicole Kidman," Denis O'Hare, who plays Mary Louise's lawyer Ira Farber, teased to The Hollywood Reporter.

Whether you think Mary Louise or Celeste will be the victor in this courtroom battle, judging by these tweets, O'Hare couldn't be more right.

More like this
You Might Want To Rewatch This Key 'On My Block' Scene To Understand 'Freeridge'
By Grace Wehniainen
The 'Freeridge' Cast Shared Their Hopes For A Potential Season 2
By Grace Wehniainen
A 'Terminal List' Sequel & Spinoff Are Reportedly In The Works
By Kadin Burnett and Grace Wehniainen
This 'One Tree Hill' Wardrobe Error Is Going Viral On TikTok
By Brad Witter
Get Even More From Bustle — Sign Up For The Newsletter
From hair trends to relationship advice, our daily newsletter has everything you need to sound like a person who’s on TikTok, even if you aren’t.