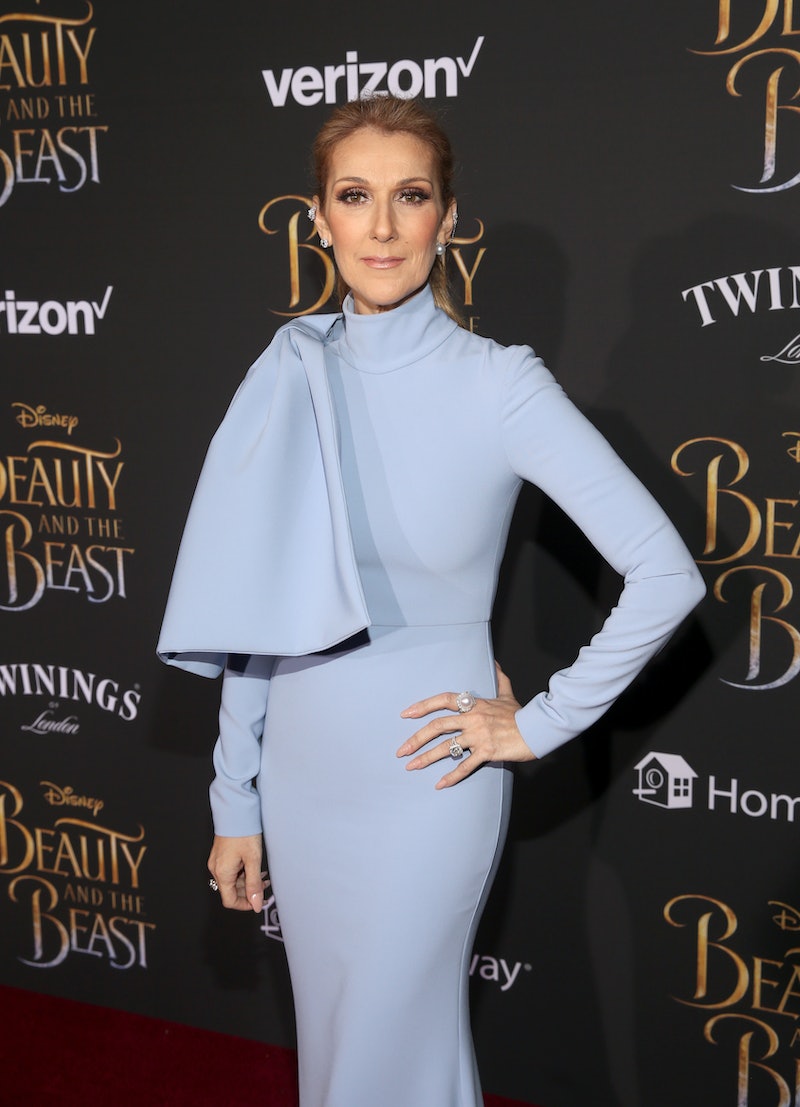 There is only one Céline Dion. Many of us, however, can relate to Céline Dion fangirling over Lady Gaga at the premiere of her Vegas residency Enigma. The Sin City queen herself, who's performed her own show since 2011, was so supportive of Gaga's premiere that it's not only relatable, but inspiring. Dion dedicated a heartfelt Instagram post to Gaga's big opening night, and luckily, she was also documented living her best life at the show by many of fans in the crowd.

After channeling her inner Gaga from the audience during Friday night's opener, the legend posted a time lapse video of herself dancing the night away in the crowd. Her commitment was seriously unmatched. Dion performed from her seat like a Gaga backup dancer, and she even posted a photo of herself totally beat while posing on a stretcher after the show.

Dion praised her fellow music icon in the post, writing, "I had so much fun last night @ladygaga! Your energy on stage is contagious and you literally took my breath away! I wish you all the best with your #Vegas residency! - Céline xx…"

From the videos alone, it's clear the mutual love and support between Dion and Gaga that night was electric.

Dion, who will wrap her residency in 2019 after eight years, has lovingly passed the baton to Gaga in the most genuine way. She was caught among the 5,000 fans in the room rocking out to "Edge of Glory," flailing her arms out Titanic-style and fist-bumping. Her routine was captured from multiple angles... all of which are amazing to watch.

During the show, Gaga even took time to shout out Dion's support, and she went on to dedicate her 2011 hit "Yoü and I" to the artist. "She prayed with me and my entire crew backstage before this show, that’s how amazing she is," Gaga reportedly told the crowd while sitting at the piano. "And when she was asked if she had any advice for me in Las Vegas, she said I didn't need it because I was strong and I knew what I was doing, and, oh my god."

As Dion's Vegas chapter sadly closes, Gaga's opens, and because of that, the two already have such a special bond. Gaga continued, "I swear to you, the number of women that I can count on one hand who are supportive in this industry — I would lose fingers. You are amazing." Dion, who watched her carefully from the crowd, pointed at Gaga to reciprocate the love.

Dion isn't the only one who's raved about Gaga's highly-anticipated show since its debut. Variety praised Enigma's opening for Gaga's ability to sing live while taking on difficult choreography and going back to her dazzling, larger-than-life roots. "Watching Gaga do what she does best — even better than act, still — is all the story or connecting thread a show needs," Variety's Chris Willman wrote. "She and 'Born This Way' were both born to be in Vegas, and to raise the bar for superstar residencies just a little bit higher."

Gaga and Dion just need to unite on stage in the coming months to show Vegas something it has never seen before.