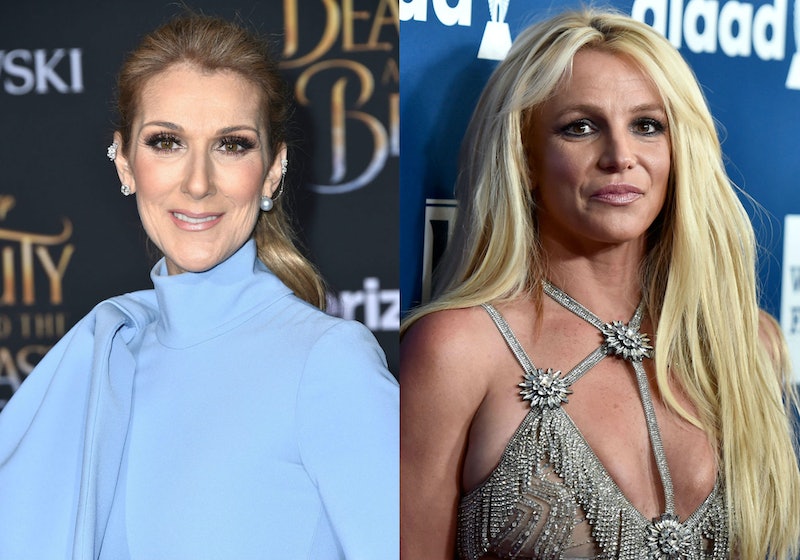 After reports surfaced on Wednesday that the "Stronger" singer is seeking treatment, Céline Dion is supporting Britney Spears publicly. While chatting with Entertainment Tonight, Dion told the publication she doesn't know Spears personally, but she wishes her well and is sending her immense amounts of love. Following an Instagram shared on April 3 by the singer stressing the importance of self-care, TMZ reported that Spears is seeking treatment in a mental health facility. (Bustle previously reached out to Spears' reps for comment on the reports, but did not receive an immediate response.)

As Dion told ET about the Glory artist, "Right now she needs courage, so I'm sending her all my courage, and my inner strength, and my stability, and the love and respect I do have for other artists." Dion continued,

"It's hard sometimes... but, you know, when you go [through] something hard, especially [with] a family member, you find strength within yourself you did not know you had. I do not know her so personally, but, after a while, when you go through something tough, you come back stronger."

Next to a photo on Instagram reading, "Fall in love with taking care of yourself mind, body, spirit," Spears wrote on Wednesday, "We all need to take time for a little 'me time' :)."

According to TMZ, sources claimed Spears reportedly "checked herself into the facility about a week ago where she will live for 30 days." That same day, ET also reported that family sources claimed the musician was reportedly "currently in a facility taking time to care for herself." Per both ET and TMZ, Spears is reportedly seeking treatment due to distress stemming from a major health scare her father Jamie Spears suffered late last year. Following the news of her dad, on Jan. 4, the singer revealed she was taking an "indefinite hiatus" from performing in her new Las Vegas show, Domination, to take care of her father.

Like Dion, Spears has received love from many others, including her boyfriend, Sam Asghari. He shared Spears' Instagram and wrote next to it, "It isn’t weakness, It’s a sign of absolute strength, people should only be inspired by this, at least I am [heart emoji] #stronger."

According to a source who spoke with E! News, Asghari has continuously supported Spears through everything she's faced over the past few months, especially with her dad. The source said, "Sam has stuck by her side throughout all of her recent struggles and knows that this is just a phase in Britney's life that they will have to adjust to right now."

The same source also claimed that Asghari, who was first romantically linked to Spears in late November 2016, has been "very helpful in making sure Britney did whatever she needed to feel better."

Even Kevin Federline, Spears' ex-husband and father of their two children, 13-year-old Sean and 12-year-old Jayden, is sending her positive thoughts. His attorney, Mark Vincent Kaplan, told ET on April 3, "Kevin commends Britney for recognizing that she needs to take a step back and that she is taking the reasonable steps to dealing with her situation in a responsible way. He wishes everyone well."

The reports surrounding Spears seeking treatment remain unconfirmed at this time, but it's nice to see so many people, including fellow artists like Dion, rooting for Spears by sending her love and strength.