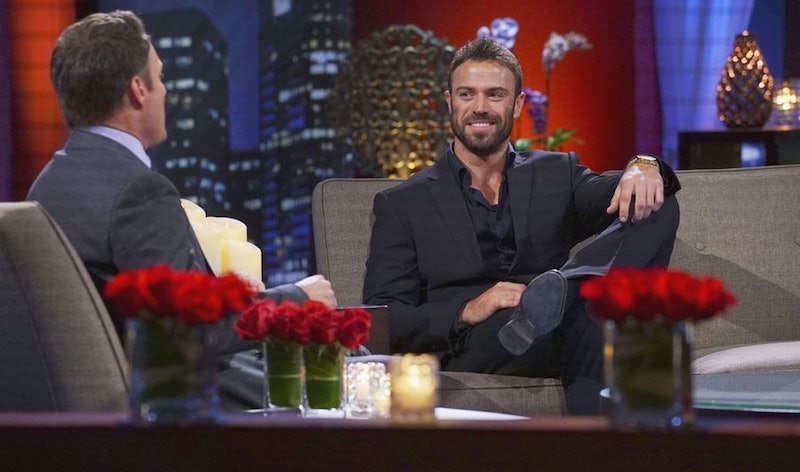 On Sunday, reports emerged that Bachelor In Paradise filming has been suspended over alleged misconduct on set, and unsurprisingly, one of the franchise's most notorious villains has already weighed in with a response. But Chad Johnson's tweets about the Bachelor in Paradise news are more than just cringeworthy, they're insensitive, crude, and outright disrespectful. "I'm excited for The Bachelor in Pornadise," he wrote, adding, "TV Shows I've been on - 4 TV Shows I've messed up so bad that they had to stop filming - 0."

EARLIER: His comments come on the heels of Warner Brothers halting production and releasing the following statement to The Hollywood Reporter:

According to People, who spoke to two unnamed sources, the incident allegedly involves recent Bachelorette castoff DeMario Jackson, whom Rachel Lindsay eliminated from her ongoing season during Week 2. The sources alleged that producers filmed Jackson in a sexual encounter with a female contestant who may have been too drunk to consent. The story is still developing, but more details will hopefully follow. For now, Season 4 of Bachelor In Paradise has been suspended as Warner Bros. further investigates.

Regardless of the outcome, however, Johnson's tweets show a blatant disregard for the sensitive nature of such allegations. Alleged sexual misconduct is not a matter that should be taken lightly, and certainly not one that should be joked about.

Fans will recall that Johnson himself has come under fire for his behavior on various Bachelor franchise shows: he quickly garnered a reputation as the resident bad guy during Season 12 of The Bachelorette, and was removed from Bachelor In Paradise Season 3 for his offensive and belligerent antics. All of which makes it even more unfortunate that he doesn't seem to have learned anything from his past transgressions, as well as disappointing that the franchise appears to keep tolerating it. If this situation has made anything clear, it's that both Johnson and the Bachelor Nation team need do some meaningful reflection.