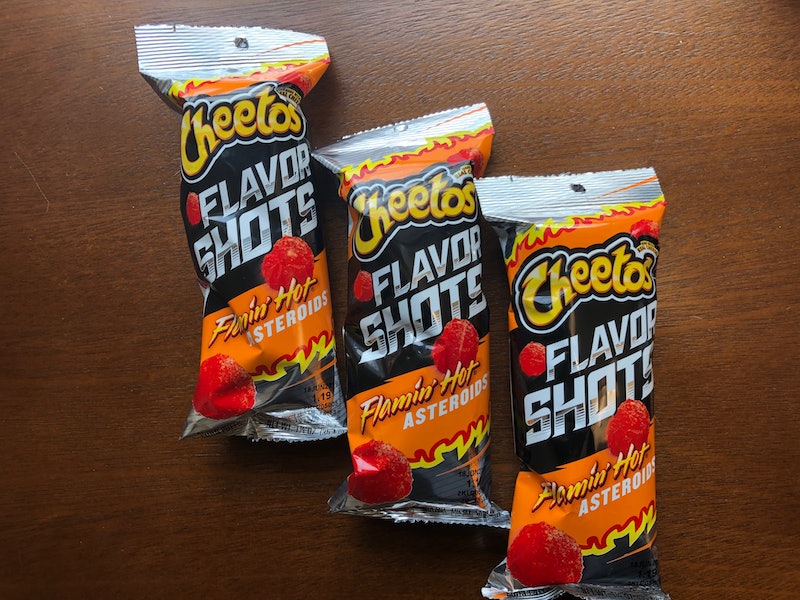 Snack food nostalgia is a brand of nostalgia all its own — and if you happen to be a longtime Cheetos enthusiast, prepare to have every single one of your nostalgia buttons pushed: Cheetos Flamin’ Hot Asteroids are back after 10 long years away. They’ve been resurrected by Frito-Lay for the new Flavor Shots line of snacks — and, as far as I can tell, they’re everything you remember about them, right down to their portability. Congrats, Cheetos fans. Your devotion has paid off.

Cheetos Flamin’ Hot Asteroids were originally introduced in 2000. Part of the Go Snacks line, they took everything folks loved about Flamin’ Hot Cheetos — which had themselves debuted in 1992 — and made them into the perfect on-the-good snack food. Shaped like spheres instead of the standard… squiggle? How does one describe the shape of a regular Cheeto? Let’s just go with squiggle: Shaped like spheres instead of the standard squiggle, they came in cylindrical canisters — and people loved them. Alas, though, they were discontinued in 2009, vanishing from the Cheetos lineup, much as an asteroid burns up in the atmosphere of a planet with which it collides.

But — as is often the case with beloved, discontinued snacks — ardent fans never stopped hoping for their return. Indeed, somewhere in the neighborhood of 9,000 people follow a fan page for Cheetos Flamin’ Hot Asteroids on Facebook originally created way back in 2011 (here’s its first post). And although the page didn’t have much activity throughout 2018, it’s now seen a resurgence — because hey, guess what? Its goal has been met: Asteroids are back. And they brought some friends with them.

I’ll be honest: I am not, nor have I ever been, a Cheetos person. What’s more, if I were going to eat Cheetos, nine o’clock in the morning is not the time at which I would choose to do it. And yet, here we are, with I, your humble narrator, opting to taste test Flamin’ Hot Asteroids first thing in the morning, thanks to a few bags provided to me courtesy of Frito-Lay. I do this for you, friends, so that you don’t have to.

Never say that I don’t care about you.

Never having had the original Asteroids, I can’t compare the new ones to them, but the Flavor Shots version taste pretty much like you’d expect: The classic Flamin’ Hot flavor is all there, offering an impressive but not unbearable kick in tiny, bite-sized form. In fact, the Asteroids resemble nothing so much as bright red Cocoa Puffs, except they, uh, definitely don’t taste like chocolate. Texture-wise, they’re light and airy, and the poppable (as in, they’re easy to just pop in your mouth) nature of their size and shape makes them a little less messy than Cheetos typically are.

Again, I am not a Cheetos person, so I wouldn’t reach for them myself if I had other options available (potato chips are the world’s greatest junk food, and yes, this is the hill on which I am choosing to die) — but if you are a Cheetos person, and/or if you have a fondness for the Flamin’ Hot flavor in particular, and/or you have fond memories of the original Asteroids, you’ll probably be quite happy with these.

Just…maybe don’t drink coffee right after eating them. I just did, and I regret it. (Remember that whole thing about it being nine o’clock in the morning?)

Anyway, welcome back to the fold, Asteroids. You’ve been missed. Find ‘em on shelves nationwide.