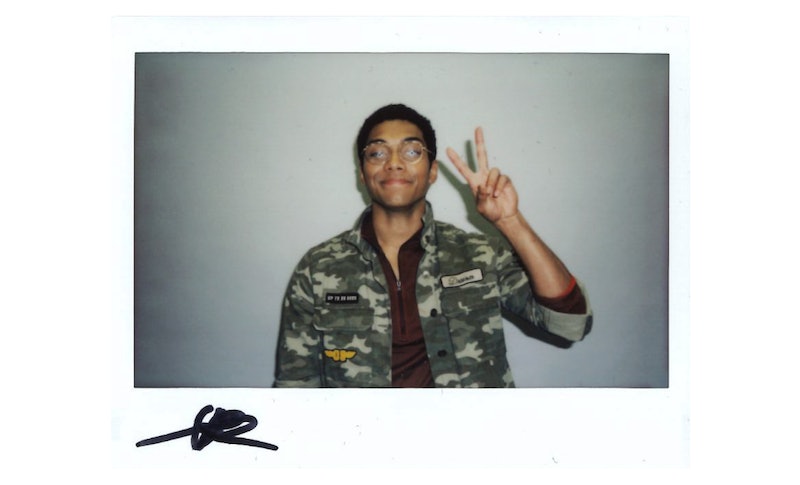 When celebrities hang out with Bustle editors, we want to give them the chance to leave their mark. Literally. So we hand them a pen, a piece of paper, a few questions, and ask them to get creative. The rest is up to them. This time, Chilling Adventures of Sabrina star Chance Perdomo, who plays Ambrose, is leaving his mark in the Bustle Booth.

Chance Perdomo is a hugger. When he enters Bustle's offices on a crisp October day, he catches me off guard with his openness, enveloping me in a friendly hug upon our first introduction. Like his character Ambrose, Sabrina's charismatic cousin on house arrest in Netflix's Chilling Adventures of Sabrina, Perdomo has a palpable warmth in person; he's quick to answer a question and then throw one back at me casually, and he's not afraid to let the conversation get serious. It's easy to see how Ambrose is set to become a fan-favorite character. In fact, when we speak weeks before the show's debut, he sort of already has.

"Within an hour of the show casting announced, I already found a fan page [for myself]," Perdomo says. "I was like wow, OK, that was quick." While there was plenty of hype surrounding CAOS as a whole, fans were particularly excited to learn from his character description that Ambrose identifies as pansexual. But on the show, Ambrose's sexuality is never discussed explicitly; his relationship with fellow warlock Luke is treated simply as fact. That's on purpose, according to Perdomo.

"We didn't want to treat [Ambrose's pansexuality] as a buzzword," Perdomo says, suggesting that the show chose to mention pansexuality in the character description to get it out of the way and allow Ambrose's actions in the show to stand on their own. "It's just part of a multifaceted individual."

Too often, Perdomo says, queer characters or characters of color or both are introduced and summarily killed off once their relationships or storylines have run their course. "It's like wait, come on, that's not how real life works," Perdomo says, leaning back in his chair. "These kinds of narratives are narratives we haven't seen explored in depth before, on TV especially. Ambrose is pansexual and an ethnic minority and he's a very old soul in a young man's body, like that's not your typical shirtless white man with a six-pack running in the jungle saving a damsel in distress story."

And Ambrose has plenty of depth in ways that have nothing to do with his love life. While his intentions when it comes to protecting his cousin Sabrina and his aunties are "pure," according to Perdomo, he's also been on house arrest for decades for a very serious crime, which hints at his darker side, or at least a complicated past. "I'll say this, Ambrose is drawn to power," Perdomo teases. "He's drawn to power and knowledge for power’s sake."

While it's unclear if this attraction to power will lead him down the wrong path, the beauty of Ambrose is that despite his past mistakes and his shifty intentions, he's eminently watchable and lovable, whether he's delivering a well-timed side-eye to Sabrina or dropping a particularly dry aside into an otherwise serious conversation. Chances are, you'll be charmed by Chance Perdomo, too. Check out his answers — including one very specific coffee order — in his Bustle Booth.

More like this
On 'The Handmaid’s Tale,' Christine Ko Fights Back
By Gretchen Smail
Ismael Cruz Córdova Loves His Elf Ears
By Morgan Leigh Davies
Nicola Coughlan Shared A Lady Whistledown Excerpt From ‘Bridgerton’ Season 3
By Grace Wehniainen, Alyssa Lapid and Sam Ramsden
A New 'And Just Like That' Table Read Pic Confirms A Key Character's Return
By Jack Irvin and Grace Wehniainen
Get Even More From Bustle — Sign Up For The Newsletter