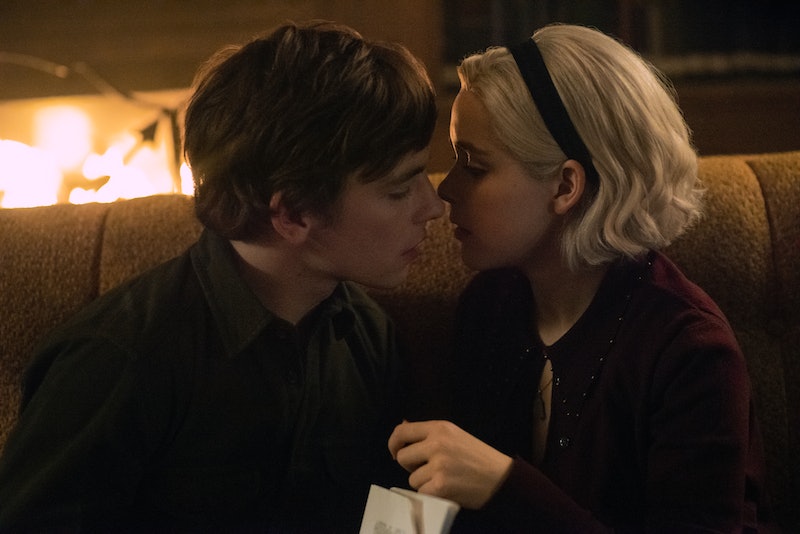 Sabrina Spellman's love life is shaping up to be quite complicated, to say the least. Chilling Adventures Of Sabrina star Ross Lynch's comments on the love triangle brewing between Sabrina and his mortal character Harvey Kinkle and mysterious warlock Nicholas Scratch (Gavin Leatherwood) make it seem like the situation may not even be three sided. "I think it’s a love square, personally," Lynch shared in a recent interview with Cosmopolitan "But the love triangle has a bit of a ring to it."

Either way, fans of the bewitching Netflix series can expect to see Sabrina (Kiernan Shipka) as torn between the two men as she was about choosing her mortal life or that which came after she finally signed the Dark Lord's book in Season 1. And that dilemma will surely take center stage in the second season (streaming on Netflix beginning April 5). As Lynch elaborated to Cosmo:

"That’s a big part of my story line, actually, because now that Sabrina is pretty much going to the Witch Academy full time, Harvey’s still at Baxter High with his mortal friends. In this case, distance doesn’t make the heart grow fonder. And then eventually, sh*t hits the fan. And Harvey and the rest of Greendale all have to come together."

Judging by the CAOS Part 2 trailer, it seems that Sabrina and Harvey will at the very least share a passionate kiss. In a fun offscreen twist, however, Lynch said on BuzzFeed News' AM2DM that he was actually Team Nick. Meanwhile, Leatherwood admitted that he's Team Harvey because he and Sabrina are "the OG loves."

For her part, Shipka also weighed in on Sabrina and Harvey's love, in an interview with Collider, saying "there's that love that's always going to be there" — but that their relationship remains on rocky ground.

"I don’t think we’re going to see them as enemies, but I think we’re gonna see a very different Harvey and Sabrina and in the second season just because both of them have grown so much and lost people and gained things," she said.

And as for her Academy of the Unseen Arts classmate, Nick Scratch, with whom she grew close in Season 1? Shipka added to Collider:

"I think obviously Sabrina has this love for Harvey that will never go away. But at the same time, she’s a young girl and she wants to have fun and Nick is hot and awesome and she loves him in many ways. I think that they’re really fun partners in crime in the second season, without delving too far into exactly sort of what they develop into. I think that Sabrina needs a warlock in the second season to help her get done a lot of the things that she needs to get done. She does most of the things on her own anyway, but her support system is largely coming from the witch side in the second season. And I think Nick is one of the few witches or warlocks that believes in her and that has her back, and that doesn’t look down on her and think less of her."

Whether or not viewers see Sabrina make a decision one way or the other, it's safe to say that the darker new season will work its magic to enchant viewers along the way regardless.