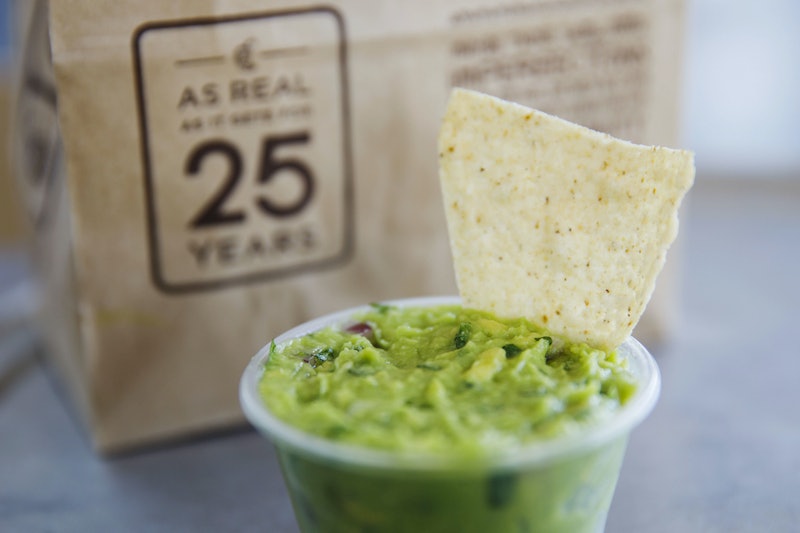 Do you ever sit in quarantine drooling from a daydream about a Chipotle employee asking if you "want guac with that?" Trick question: Of course you do. And though you might be avoiding going to Chipotle (or any restaurant) to practice safe social distancing, you can still enjoy the fast-food chain's guac-y goodness right from your own kitchen. That's right, Chipotle released its guacamole recipe and you can learn how to make it.

Much to your probable delight, Chipotle's guac recipe is actually pretty simple to recreate. All you need is some lime juice, chopped cilantro, kosher salt, diced jalapeno, diced red onion, and of course, some Hass avocados.

Once you have all the ingredients, all it takes is some mixing and mashing to get the creamy, delicious guac you've probably been craving at home. While Chipotle provided specific measurements for each of the ingredients, you can always take free reign with that part and adjust the recipe to a seasoning that better matches your palette. If you've ever sat inside a Chipotle restaurant and thought "Some tomatoes would go great with this," or "I'd love to add some garlic to this," now's your chance to make your favorite guac recipe your own.

While Chipotle's guacamole recipe is posted on the company's official Twitter account, it was originally posted on Chipotle's Instagram. In an Instagram Live that's now a permanent video post on the account, Chipotle Executive Chef Chad Brauze recorded himself making the famous guacamole, as well as three other variations to the recipe all from his own kitchen (a true social-distancing inspo!). These additional recipes included a Superfood Guac that he makes when he's feeling super healthy, The Extra-est Guac, which has all the works and then some, and his personal favorite, Guac Ranch, which is essentially just mixing in Ranch Dressing with whatever guacamole you have left. Either way you slice it (or mash it), you're in for a delicious treat.

Chef Brauze also shared some helpful tips throughout the Live broadcast, including switching out limes for oranges, which can be a great tidbit for anyone who might be allergic or just doesn't really like the taste of limes.

Chipotle isn't the first company that's released recipes to assuage customers who are at home and can't go out to consume their products. Disney has been letting fans in on how to make some its most desired treats including its plant-based cookie fries, Walt Disney's famous chili, and grilled three-cheese sandwiches. IKEA's also helped out by releasing the recipe to its famous Swedish meatballs for people to create in their own homes.

While you may have to get used to dining indoors for a while, that doesn't mean you can't still enjoy some of your favorites. And at this rate, by the time quarantine is over, you'll be able to recreate any and all of your restaurant faves right from your own kitchen.