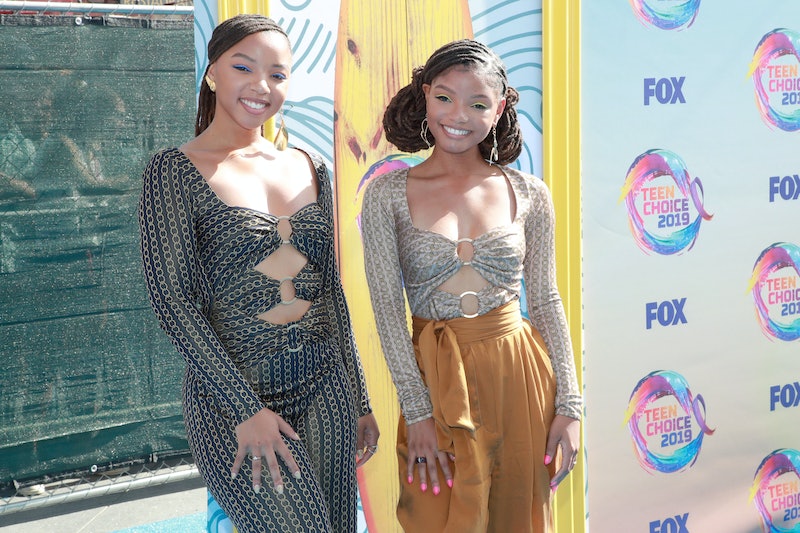 In case you missed the broadcast, the Teen Choice Awards were held on Aug. 12, and some of your favorites stars were there. From host Lucy Hale to award winner Taylor Swift there were a lot of people to see. Chloe x Halle's 2019 Teen Choice Awards makeup may have stolen the red carpet. The bold and bright Euphoria-inspired eyeliner the twin singers and actors wore was the perfect summer look with a pop culture twist.

If you haven't seen Euphoria yet, you've still likely seen some of the makeup the actors on the show have worn. The beauty looks have been making headlines with people imitating the glittering, bold makeup seen on the actors, and YouTube gurus have even started filming tutorials based on some of the makeup done for the show. Now, Chloe x Halle have brought Euphoria-inspired makeup looks to the red carpet.

For their Teen Choice Awards red carpet makeup, both Chloe and Halle decided to rock bold, graphic eyeliner, and they made sure the focus was on the look. While their eye makeup make have bold and colorful, the pair chose to keep their Jonathan Simkhai ensembles neutral which made the beauty looks stand out even more as they walked the carpet.

While the fact that Euphoria inspired their looks may be the best part of the makeup for some, you haven't heard one of the other fun facts about the looks. They were done with all NYX products. Yes, your favorite, dependable drugstore brand is responsible for these bomb red carpet looks, and you can totally rock them yourself.

For Chloe's look, makeup artist Christiana Cassell used all NYX products including the liner for the Grown-ish star's blue look. Cassell used the Modern Dreamer Shadow Palette from NYX to create a soft neutral look on Chloe before going in for the liner. According to the brand, Cassell then used the NYX Vivid Brights liner in Sapphire Blue to create a classic, thin liner look with the blue color extending out beyond Chloe's natural eye.

As for Halle's look, Cassell used the same palette to create the neutral shadow look before going in with a different color line from the same range. The brand explains that the recently cast star of The Little Mermaid wanted a thicker liner look than her sister. Cassell used the Vivid Brights Eyeliner in the lime green shade Vivid Escape. Due to Halle's liner being thicker, Cassell actually created a border of the liner then used a brush to fill it in.

While Chloe x Halle's looks may be exact replicas of ones seen on Euphoria, the Teen Choice Awards presenters took the colorful looks of the show and made them their own. Now, thanks to NYX, you can do the same.

With the singers' and actors' NYX eyeliner retailing for just $7, creating your own Euphoria-inspired look at home is actually affordable. If, however, you're more of a Grown-ish fan, just recreate Chloe x Halle's look to be in on the bold, graphic liner trend.

More like this
Dua Lipa On YSL Beauty, Plus Her Fearless Approach To Hair & Makeup
By Erin Stovall
Jenna Ortega's Hair Routine Occasionally Involves Washing Out Fake Blood
By Olivia Rose Ferreiro
A Definitive Guide To All 52 'Real Housewives' Beauty Brands
By Audrey Noble
Jennifer Lopez's Holiday Pedicure Has The Most Glam Snowflake Design
By Olivia Rose Ferreiro
Get Even More From Bustle — Sign Up For The Newsletter