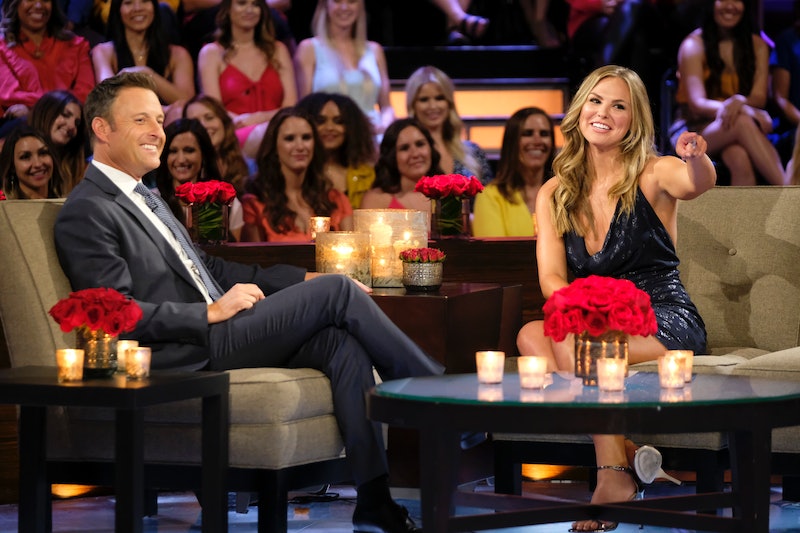 Being a reality TV show (or competition show, depending how you look it at), The Bachelorette and Bachelor Tell Alls and finales are always full of real tears and real drama. And this season's Bachelorette Men Tell All and After The Final Rose will no exceptions. In fact, according to Bachelor host Chris Harrison, thanks to off screen scandals that occurred while the season was still airing, it's going to be one reunion episode fans aren't going to want to miss. And Chris Harrison's comments on Jed Wyatt's controversy show that not only will the reports of him being in another relationship while on The Bachelorette be addressed, but viewers might get more information and another side to the story they think they know.

On June 18, Haley Stevens, an aspiring musician, came forward with her claim that she had been dating Jed when he went on The Bachelorette. According to Stevens' interview with People, she and Jed were still in a relationship when he left to film The Bachelorette — which she claimed he told her was just a career opportunity. And fans have been dying to see Jed answer to these allegations. As he's still on the show, he hasn't been able to speak out publicly yet, which is what makes the After The Final Rose special, set to air Tuesday, July 30, the perfect opportunity.

While filming the Men Tell All episode on July 12, Harrison spoke to Entertainment Tonight and revealed that he can't wait to speak to Jed on camera. "I wanna hear him talk. I wanna hear him answer some questions and there are a lot of things that need to be said," Harrison said. "And I'm gonna push him, but I wanna have that conversation. There are a lot of things that remain to be solved as we head into this two-night finale."

Since Jed's ex went public, fans have been struggling watching him "fall in love" with Hannah, and watching her do so in return. But Harrison had some wisdom for fans who want to paint him the villain: "There's always three sides to the truth — their version, their version and then the real version," he told ET.

Harrison assured fans that they heard what Wyatt's ex, had to say and, of course, emotions were running high. It's unclear if they talked to her in front of the cameras, but it sounds like both sides will be portrayed on the After The Final Rose special. Since Wyatt is one of the remaining three men, he won't be on the Tell All, but will get to say his piece on live television during the second night of the finale.

"I really don't know [if Brown ends up with a liar]. I don't know. That remains to be seen," Harrison said. "We will find out and that's part of the beauty of the live finale is I don't know what's going to happen, with Peter, with Tyler, with Jed, with all of them. I think there's a lot of questions to be answered."

Harrison was equally diplomatic speaking with Us Weekly about Jed's cheating allegations. "I’m going to give Jed his say and give him his time, and then let’s judge," he said. "Let’s just take it easy for a second, and take a step back. Give him time and then let’s see where it all falls.”

Whether or not Jed can say anything to make Hannah understand, or to earn any sympathy from viewers, remains to be seen. Only a couple more weeks until all is revealed.