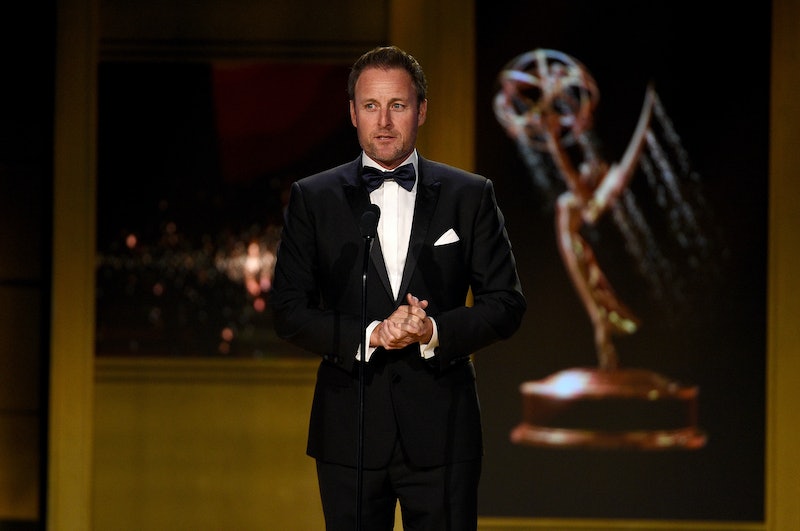 The Bachelor Mansion will bounce back. In a recent interview with The Hollywood Reporter, Bachelor host Chris Harrison said the Bachelor franchise could return to the Bachelor Mansion as early as the next season of The Bachelorette. Though the property was affected by the Woolsey Fire, the Agoura Hills abode remains intact, and it sounds like the residence the dating competition series has called home for over a decade will be camera ready soon.

“The house that we use for production, office space and storage. That burned down. Then the outside patio, which was wood, burned down and stuff melted around the house. But the actual house is standing.”

The Woolsey Fire was one of several wildfires that hit California last month, tearing through a list of cities that includes Malibu, Thousand Oaks, and Agoura Hills. The Bachelor Mansion was in danger, but contrary to initial reports, it did not burn down. As Marshall Haraden, the owner of the Bachelor Mansion, told Us Weekly,

“The main house is there. Everything’s fine and the accessory building up front that they use for the shows as a basecamp, it was destroyed. It’s gone, but it’s not something that’s do-or-die for the show that [production] relies on.”

He also went on to assure Us Weekly that the fire damage is "not going to interrupt the show." As Haraden joked to Entertainment Tonight, "Chris, you got nothing to worry about. I got your back."

The Bachelor Mansion is still standing, and it is reportedly thanks in part to the Haraden family’s neighbors. When 16-year-old Ava Friedman and her father returned to their home after evacuating, they saw that their next-door neighbors’ property was in flames. They acted fast and found the nearest firefighters and pointed them in the direction of the Haradens' house. Friedman told Entertainment Tonight, "We wanted to get this fire out as quickly as possible... so we got into our car and we tried to catch the attention of a fire engine.” She noted that the firefighters put out the flames “as soon as we told them this.”

“The first thing that comes to your mind when you see that is danger, it doesn't matter whose house it is. We're all just trying to help each other up here, especially in this difficult time. I just wanted to help out and my dad wanted to help out... we were just like, 'OK, we just need to do something as soon as we can.’”

Hats off to that.

Harrison’s determination to get The Bachelor franchise back in the Bachelor Mansion is not just about series tradition, but supporting an area that was ravaged by a wildfire. He said to THR,

“We do a lot of good in the community. We shop here, eat here and stay here at the hotels. And dump a lot of money into the community when we shoot here. So my goal is to make sure we get back into the house and use it, especially this season, to show that we’re back and that the city is good. And hopefully, bring the money and jobs back here."

How about those for some right reasons.