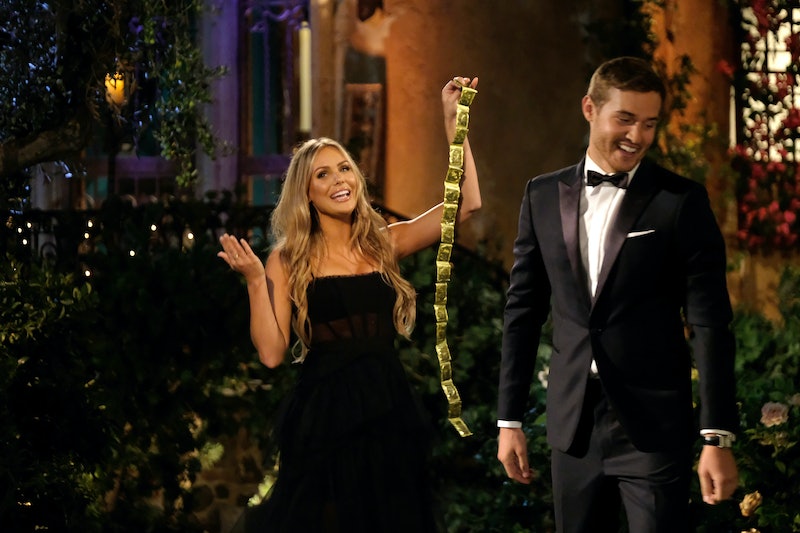 Peter Weber's season of The Bachelor may only just be getting started, but that isn't stopping host Chris Harrison from spilling the tea about what happens later in the season. In fact, there's one detail that Harrison teased about Peter's Bachelor Fantasy Suite dates that'll give that tried and true windmill joke a run for its money and adds another notch to Peter's, uh, stellar reputation in the boudoir.

The subject came up when Harrison was asked by Entertainment Tonight to clarify how the crew goes about preparing for the fantasy suites. That evidently includes making sure there's plenty of protection available in case the Bachelor and his contestant choose to heat things up. As for how many condoms are provided, Harrison assured the outlet they offer "as many as are needed," while adding that Peter's amount proved to be a bit higher than the norm. "I think with Peter we had to up our game," Harrison added. "Knowing what we had going in, we had to at least have half a dozen."

This is, of course, in reference to Peter's time on The Bachelorette last year when Hannah Brown confessed that she and Peter had sex in a windmill not once, not twice, not thrice, but four times. Since then, Peter's impressive stamina has become a go-to talking point and punchline throughout his Bachelor journey thus far.

During the limo arrivals this week, one contestant even went so far as to dress up as a windmill while another pulled out a ton of condoms — a nod to when Hannah accidentally found condoms in Peter's car during her hometown visit on The Bachelorette. Clearly this Delta pilot has developed quite the reputation for being a passionate guy and it seems that'll still hold true when his Fantasy Suite dates come around.

"We know four is on the table, so you gotta be safe further than that," Harrison stated, referencing Peter's windmill record. "We had to be safe with him." And as for who's in charge of getting more condoms should production run out during filming? "Sadly, also my job," the host joked. (If it exists, can someone please get that CVS camera footage ASAP?)

Harrison didn't go so far as to share which contestants will make it as far as the Fantasy Suites, but if these teasers are any indication, they're bound to have quite the unforgettable evening away from prying eyes.