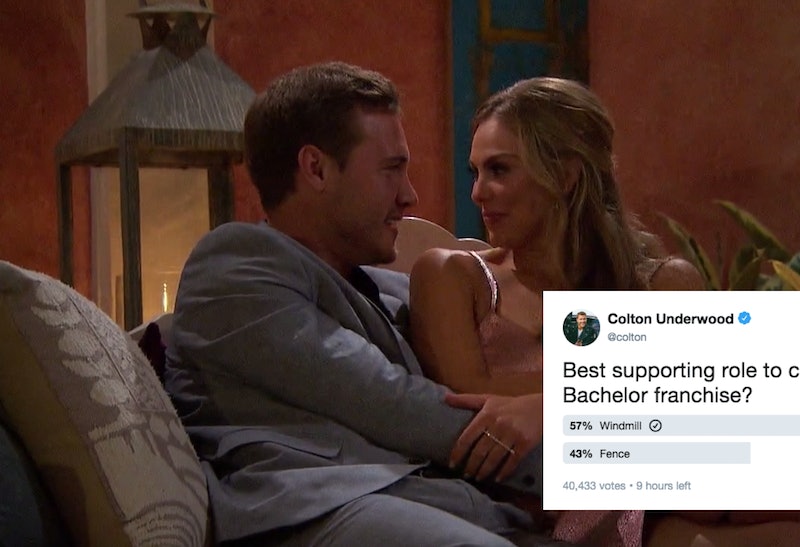 After weeks of anticipation, The Bachelorette viewers finally know who Hannah got with in the windmill: Pilot Pete during the first fantasy suite date of the season. Of course, fans had a lot to say about the revelation, but Bachelor alums also tweeted about the windmill moment and their reactions were pretty great.

As if Hannah and Pete talking about the prevalence of windmills in Greece wasn't enough of a hint, they also had a conversation about condoms while he held one in his hand while they were sitting in a windmill. The morning after their sleepover, the camera crew made sure to zoom in on the piles of clothing on the floor. And then there was Hannah's unforgettable confrontation with Luke P., where she admitted she "f*cked in a windmill." She later revealed to viewers that they actually did it two times.

As of this moment, the fandom hasn't heard from Pilot Pete himself. It's likely he can't do interviews until his time on the show is done, but he hasn't even commented on social media since Hannah's big revelation. However, plenty of Bachelor and Bachelorette alums had something to say about Hannah and Pete's quality time in the windmill — including Hannah herself.

1. It Could Make A Catchy Song

The Bachelorette reworked Lil Jon's classic lyrics from "Get Low" to celebrate her time in the windmill. This really would be a catchy remix, as long as Jed wasn't singing it or strumming on his guitar.

During the last season of The Bachelor, viewers looked forward to Colton Underwood hopping the fence and the moment did not disappoint. Hannah's windmill moment had just as big of an impact on her journey, something that Colton recently discussed.

3. Inanimate Objects Are Stealing The Spotlight

The Bachelorette alum Jason Tartick isn't wrong: Fences and windmills really have come a long way. They went from barely being mentioned to hot topics of conversation. The roses must feel left out.

Based on how this season has been going, it wouldn't be surprising if someone more problematic ended up in the windmill with Hannah. Minus some debatable accusations from Pete's recent ex-girlfriend, he has been a beloved contestant this season.

5. The Windmill Wasn't The Most Luxurious

The Bachelor alum Danielle Maltby was not a fan of the accommodations in the windmill. However, Hannah and Peter did not seem to mind at all.

6. Peter Has Plenty Of Material For Jokes

This encounter will live on in Bachelorette history. No one can blame Nick Viall for joking about it. Hopefully, Peter has a great sense of humor as well.

7. Peter Has A Good Chance Of Having Another Windmill Encounter

As a pilot, Pete might end up flying over some windmills while he's at work. Just imagine being on one of his flights if that happened. Legendary.

8. The Episode Was All About The Windmill

Bachelor in Paradise alum Chris Randone got it right with the GIF he shared. Windmills were the mood of the night.

9. "Always Be Cam" Has A Windmill Tattoo

It's easy to forget there was another "villain" on the season aside from Luke P. But remember "Always Be Cam"? The guy who crashed a group date and solely spoke in the first person. Bachelorette alum James Taylor tweeted a video of Cam showing off his windmill tattoo. How. Awkward.

No one who watches this show will ever think of windmills the same way ever again, not that many people were thinking of windmills before this.