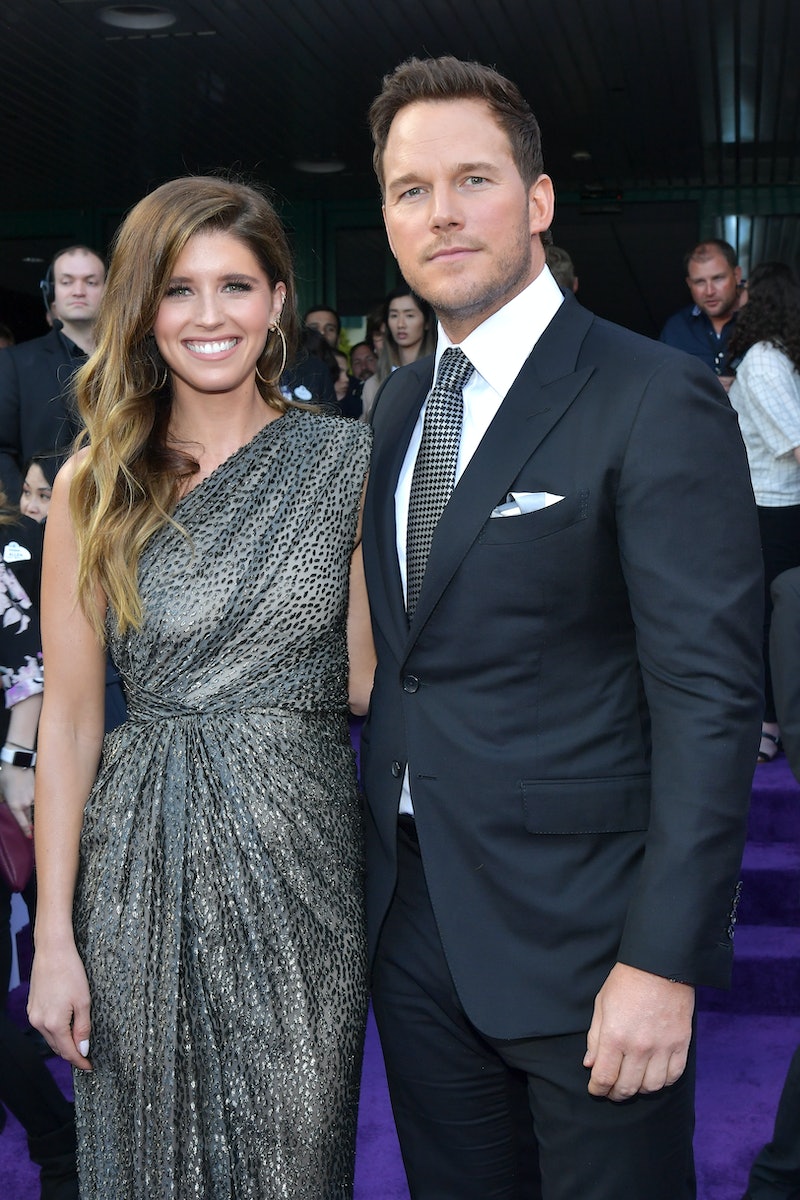 The Avengers: Endgame premiere, which was held in the Los Angeles Convention Center on April 22, was filled with some super-sized moments from the cast of the popular film series, including a particularly major moment from one of the stars. Avengers: Infinity War and Guardians of the Galaxy star Chris Pratt and Katherine Schwarzenegger made their first red carpet appearance as a couple, as E! News reported. And, naturally, the two looked amazing while doing so.

Alongside the rest of your Avengers faves, Pratt and his fiancé, Schwarzenegger, attended the premiere in pure style. As seen in the photos from the event, the couple even coordinated their outfits for their red carpet debut. The former Parks and Recreation star donned a black suit with a tie that matched his future wife's gorgeous Monique Lhuillier dress, per E! News.

The Avengers: Endgame premiere was the perfect occasion for Pratt and Schwarzenegger to debut as a couple in their red carpet best. Aside from some cute photos posted on their respective social media accounts, the pair have kept their relationship relatively private, as they only recently became Instagram official in December 2018. So, appearing on the red carpet together in full glam was a pretty big milestone for their relationship.

The pair have been going strong ever since they were first linked together back in June 2018, on Father's Day. Shortly after they were spotted in June, they were seen grabbing lunch along with Pratt's son Jack, whom he shares with his ex-wife, Anna Faris, per People. A source opened up about get-together, saying, "She [Schwarzenegger] seemed to be really happy and fit in with him and his son." They also said, "She appeared to be genuinely enjoying herself and looked entirely comfortable helping him in doting over his son," adding, "Their body language spoke volumes about how serious they are about one another."

Pratt and Schwarzenegger have been going so strong over the past year that they announced that they were taking a major step in their relationship in January. The Guardians of the Galaxy star revealed via Instagram that he was engaged to Schwarzenegger by posting a photo of the soon-to-be-married duo (with a spotlight on her gorgeous engagement ring) and writing:

"Sweet Katherine, so happy you said yes! I’m thrilled to be marrying you. Proud to live boldly in faith with you. Here we go! 💍🙏♥️"

According to Pratt, the couple is in the midst of wedding planning at the moment, as he told Entertainment Tonight at the Avengers: Endgame premiere, "I'm up to about my neck, you know? That's pretty deep. That's up to about 5-foot-something," he joked, "I'm in it baby, I'm in it. It's good. It's a good time!"

He also told ET that, despite being busy with all of the wedding details, he's very "blessed" to be where he is in life. "We're all very blessed," he said, "[It's a] good time to be here for the Avengers premiere and also good things happening for me in life. I just count my blessings every day." After their latest red carpet-themed milestone, it sounds like Pratt and Schwarzenegger are eager take their most major step in their relationship yet by exchanging vows.