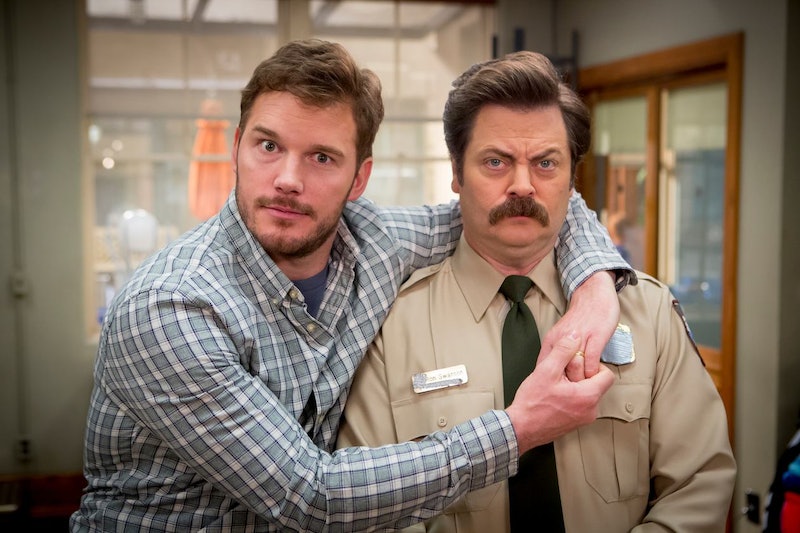 As far as friendships are concerned, fans know Parks and Recreation's Andy Dwyer and Ron Swanson (played by Chris Pratt and Nick Offerman, respectively) weren't exactly a match made in bromance heaven. Andy's goofy antics and Ron's generally stoic demeanor made them a relatively unlikely pair, but somehow, they managed to make it work. And, judging by Chris Pratt's gift to Parks and Recreation co-star Nick Offerman, it looks like the Andy-Ron bromance is still going strong in real-life, three years after the series finale.

In other words, Parks and Rec might've wrapped back in 2015, but Pratt and Offerman still manage to pal around every now and then — albeit, these days, the men are often relegated to virtual communication methods in lieu of a mutual meet-up at Pawnee's Parks and Recreation Department. Still, the communication that they do have seems to be more than enough to warm the hearts of Parks and Rec fans, many of whom have been swooning over Pratt's recent string of back-to-back Instagram posts, in which the actor revealed a particular special (and, as fans might agree, particularly Pawnee) gift from himself to Offerman.

What's that? In what seems to be a gift-giving gesture pretty characteristic of real-life Pratt, as well as his Parks and Rec character, Andy, Pratt's Instagram post explains that the gift is actually a tree. A 181-year-old Douglas Fir, to be exact. Those feeling a little bewildered right now might want to head over to Pratt's Instagram account, where the actor shared a photo of himself Friday night, July 13, wielding a formidable-looking set of power tools and sawing at the base of an enormous tree trunk.

"Another extraordinary day at the farm!!" Pratt wrote, opening the appropriately woods-y photo's lengthy caption. Continuing, the actor went on to explain that he'd chopped down the tree earlier that day because "she was struck by lightning and her top had begun to rot."

So, instead of leaving the tree to decompose (or, "become bug food," as Pratt put it), what'd he do? "She'll be made into furniture for my house in LA," he wrote, before explaining how that whole transformation process is going to work. Parks and Rec fans who've been longing for a dose of disgruntled handyman-ing a la Ron Swanson will probably be delighted to know that this is where Offerman's involvement in the non-traditional gift-giving exchange comes into play.

As Pratt explained in the caption, he segmented the trunk into a few gigantic slabs of wood first. Those slabs will be promptly shipped out to Offerman (AKA Ron Swanson), who owns a wood shop in L.A. "where he will Ron Swanson the hell out of it." Which is basically Pratt's Parks and Rec-inspired way of saying Offerman is going to handle the whole tree-trunk-to-furniture process. Seriously though, does Ron Swanson sound like the man for this job, or what?

Those who follow Pratt on social media know that "extraordinary days at the farm" aren't such a rare occurrence at the Pratt residence, since, you know, the Pratt residence quite literally exists on a sprawling plot of farmland in rural Washington. Understandably, that makes for quite a few nature-centric posts from the likes of Pratt's Instagram account, many of which see cameo appearances by the actor-farmer's spirited herd of sheep. Suffice to say, the hashtag "#farmlife" crops up in Pratt's photo captions (not to mention his Instagram bio itself) pretty often.

But, as a quick scroll through Pratt's Instagram feed will corroborate, the newest string of #farmlife-related posts to come out of the actor's account seem to have reached an entirely new degree of wholesome. Those who've been privy to Pratt's weekend social media activity probably know this already. (They also probably know the sweetness factor at play here is pretty much off the charts.)

Those who don't should be able to get caught up pretty quickly, since a click through Pratt's most recent posts also reveals an exceedingly adorable follow-up post to his initial tree-related photo, which sees Pratt and his son, Jack, holding hands in the foreground of the gigantic Douglas Fir. "Jack and I share a moment of appreciation on the last day of this amazing tree's life," Pratt wrote at the start of the post's caption, before segueing into an incredibly sincere write-up in memoriam. He wrote:

"Now this first generation Douglas Fir will be made into beloved pieces of art, mantles and a table from which my family will enjoy moments and meals for, God willing, many generations. I live for moments like these."

So, while Andy and Ron's friendship on Parks and Rec might've had its share of quirks, it looks like Pratt and Offerman's has eclipsed the duo's onscreen ventures and become something truly special. The only question remaining seems to be: Who else wants to know if the real-life Ron Swanson can furnish their house, too?