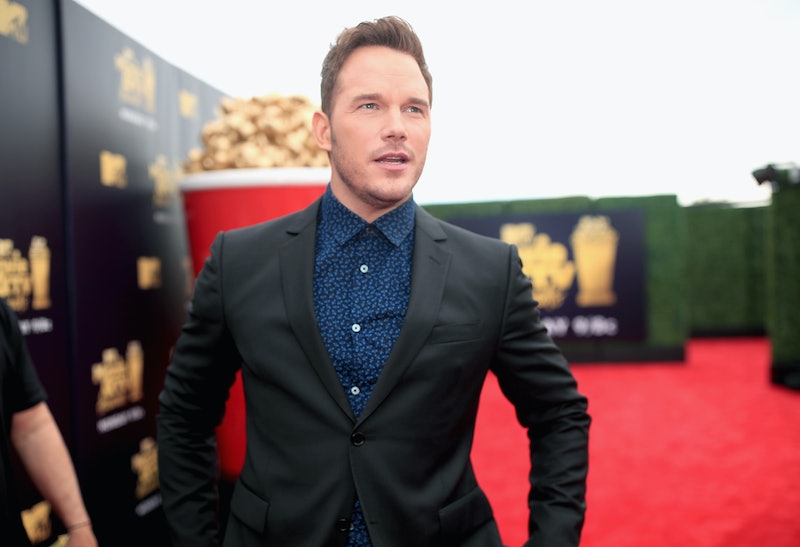 Long before they started dating, Katherine Schwarzenegger may have predicted her relationship with Chris Pratt. Kind of. She basically admitted her crush on him during an old interview — an interview that her husband-to-be just now heard about. And as pointed out by Us Weekly, Pratt's reaction to Schwarzenegger's comments about him before they met is pretty damn cute.

So, let's start with a little background first. In 2017, Schwarzenegger sat down to speak with Access. During their chat, she was asked to choose a Hollywood Chris — namely, Chris Hemsworth, Chris Evans, and her now-fiancé, Chris Pratt. Her initial response was "Chris Evans," aka Captain America. She quickly revised her reply, though, and changed her answer to Pratt. "Actually," she said, "Chris Pratt. Chris Pratt’s been looking good lately, so you never know."

Flash-forward to the present day, just a few weeks after Pratt and Schwarzenegger announced their engagement. During an interview with Access on Jan. 28, the outlet showed Pratt the footage of Schwarzenegger's admission, and — having apparently never seen it before — he was very pleasantly surprised.

As seen in the video below, when Schwarzenegger first picked Evans out of the group, Pratt's jaw dropped. "When she said Chris Evans, my heart sank," he said. "And then she rescued it!" She sure did, Chris. She sure did.

The star then went on to gush, "That’s so sweet. I literally have never seen that before so thank you for showing me that. I’m really moved." Aww, don't you just love love?

Pratt and Schwarzenegger were first rumored to be dating back in June 2018, after being set up by Schwarzenegger's mother, Maria Shriver, according to People. They ended up being spotted out and about together on a few more occasions over the next several months, and even took Pratt's son, Jack, trick-or-treating with his ex, Anna Faris, and Faris' boyfriend, Michael Barrett, according to TMZ.

In November, Pratt and his lady met The Terminator — otherwise known as Arnold Schwarzenegger, Katherine's dad — for breakfast, as per Us Weekly. They made their relationship Instagram official shortly thereafter, when Pratt dedicated a post to his girlfriend in honor of her birthday on Dec. 13.

"Happy Birthday Chief!" he captioned a collage of photos for Schwarzenegger on Instagram. "Your smile lights up the room. I’ve cherished our time together. Thrilled God put you in my life. Thankful for the laughs, kisses, talks, hikes, love and care."

Almost exactly a month later, the pair announced that they were engaged with joint Instagram posts on Jan. 14. "My sweet love," Schwarzenegger captioned her pic, which showed off her new diamond ring while embracing her husband-to-be. "Wouldn’t want to live this life with anyone but you."

Obviously, Schwarzenegger would have had no way of knowing what her future would hold when she spoke to Access about Pratt back in 2017. Still, though, her past comment and Pratt's reaction to the video today sure does make a sweet little addition to their already-sweet love story.