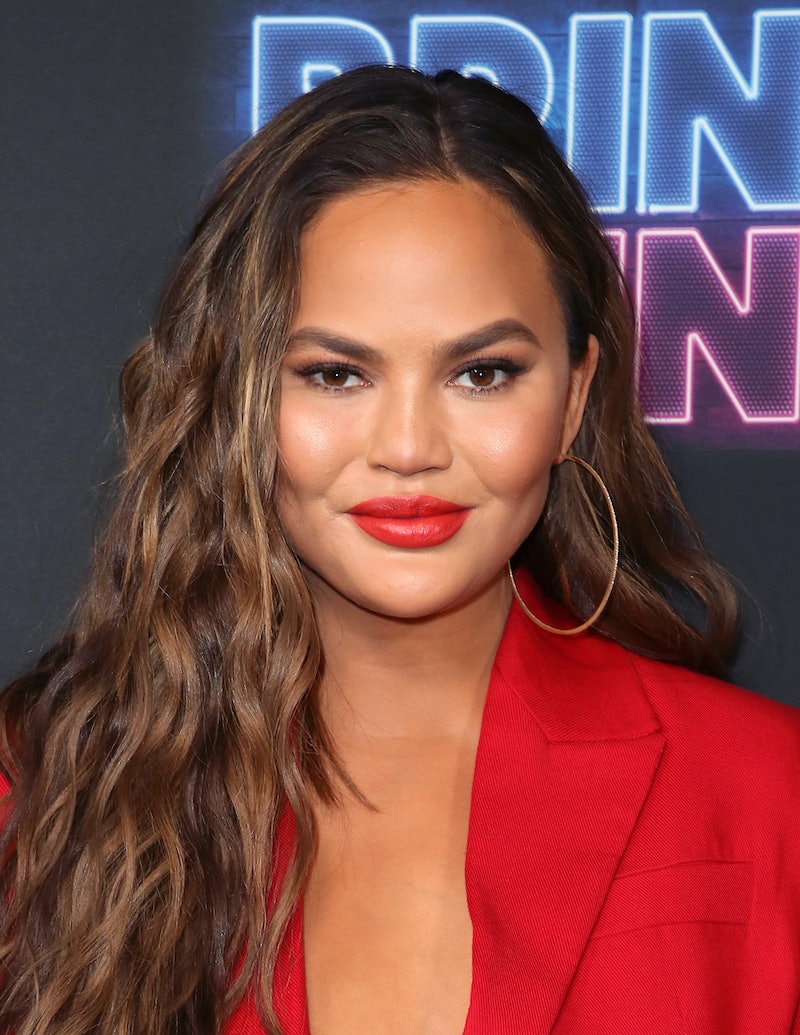 There's no celebrity who can handle internet trolls in quite the way that Chrissy Teigen can, so it's no surprise that she can zero in on what people might say about a picture before they even get the chance. Over the weekend, Teigen pointed out why her new photo with John Legend is so awkward, beating her haters to the punch. Once again, it's clear that nobody makes fun of Chrissy Teigen like Chrissy Teigen.

It all began when Teigen posted a photo with Legend, hanging out in Paris where they spent their wedding anniversary recently. At first glance, it looks like any other photo of the couple — they both seem happy to be spending time together and, as always, Luna and Miles' parents look adorable. But upon a closer examination, one thing stands out about this photo: the fact that Teigen's hand looks pretty big laying on Legend's chest.

Is it a trick of the eye? Is it just the angle from which the photo was taken? Has Teigen actually had really big hands this whole time and we're just finding out about it now? So far, those questions have no answers, but there's a very good chance that it's just a weird angle.

And don't worry — Teigen got out ahead of the hand thing before anyone else could. "Yes my hand looks comically big and 1000 of you will say this," she added in a comment.

She's probably not wrong about this one. Trolls love to pick on celebrities on social media, and Teigen seems to be a pretty frequent target for many of them. Years of living in the spotlight and more than 25 million Instagram followers seem to have taught her well how to deal with them, and now she's officially sucked the fun anyone might have gotten from mocking her for her hand.

And fortunately, her pals are there to support her, too. Vanderpump Rules star Kristen Doute also commented on the pic, writing, "Cutest hand/couple."

Fans will probably agree that Doute is right on both counts — and it's sweet to see that, despite the hate Teigen gets online on the regular, plenty of people also have her back. Regardless of how Teigen's hand looked, this is unquestionably a cute photo of her and Legend — and just more proof of how much fun they had on their trip to Paris. In fact, Teigen shared a sweet photo of her and Legend together, along with a funny caption in honor of their anniversary, writing, "Ok fine. I love you, baby. I love our life and our babies and you. So much. Here’s to 13 more years of doin it on the semi reg."

Legend responded with a post of his own from their date on the Seine, writing, "I love you forever. Here's to many more beautiful nights." He also added a follow-up comment, "#goodinstagramhusband," in response to a recent debate about his photog skills. Clearly, he's humorously self-aware, just like Teigen.

Although it would be totally understandable if mean comments on the internet brought her down, it's good to see that Teigen rises above by outsmarting her trolls. And in all honesty, her hand looks fine — and how happy she and Legend look is what matters most about the photo.

More like this
Chrissy Teigen & John Legend Reveal Their New Baby’s Name & Share First Photo
By Stephanie Topacio Long and Jake Viswanath
Blake Abbie Was In A 'Boys Over Flowers' Reboot Before 'Bling Empire: New York'
By Alyssa Lapid
12 Years Ago, Austin Butler Manifested His Oscar Nom In This Disney Movie Scene
By Jake Viswanath
Everything You Need To Know About Kanye's Post-Kardashian Dating Life
By Bustle Editors
Get Even More From Bustle — Sign Up For The Newsletter