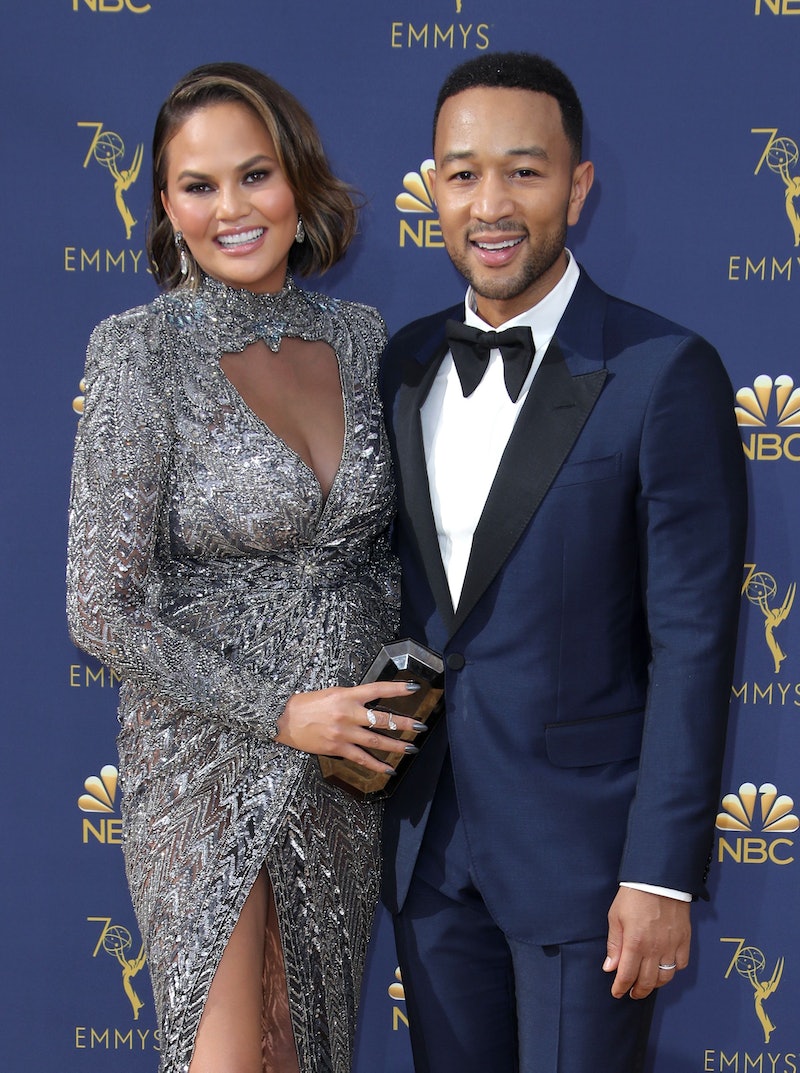 You can always count on Chrissy Teigen to post some of the best content on social media, whether it's a hilarious update or even a cute photo of her family. She did just that on Oct. 25, according to People. Chrissy Teigen posted a photo of her son Miles, which prompted more than a few users — including a couple of celebs — to acknowledge his uncanny resemblance to his talented father, John Legend.

Teigen posted a photo of her son having a bit of a messy time with his meal, which she captioned with, "baby bear is eating!" Not only is it completely adorable, but the snap also shows off Miles' incredibly resemblance to his pops. Seriously, he's the spitting image of the singer. And clearly, many agree, as their comments on Teigen's post would suggest.

One user joked, in reference to The Curious Case of Benjamin Button (which, as a refresher, is a novel in which a man is born old and ages backwards) that Miles looks so much like his dad that it should actually be, "The curious case of John Legend." Another wrote simply, "Whoa daddies twin for sure!" In addition to her fans commenting on the resemblance, a couple of celebs got in on the fun, too.

Comedian and the host of The Daily Show, Trevor Noah, also noted the resemblance with some of his classic humor. He wrote, "That looks like you face swapped John onto a baby!" And honestly, it really does?

This isn't the first time that Legend's little lookalike was in the spotlight for looking exactly like his dad. On Oct. 4, Teigen posted a photo of her baby and acknowledged just how much the father and son duo look alike. In the caption for the snap, she wrote, "Tummy time for my mini John!!!"

Based on one of Teigen's latest interviews with E! News, it seems as though Legend and Miles have more than their looks in common. In fact, she said at an event by Sephora in honor of her Becca Cosmetics Craving collection that the two are actually super alike when it comes to their personalities. She said:

"Honestly, he loves the quiet moments. He loves story time and Luna was just like a bull. From the moment she came out, you just knew exactly that she was going to be such a Luna — like just a nutcase. Miles is reserved — he's just John. He's like this cuddly, lovable little ball."

Ever since Teigen and Legend welcomed their son into the world back in May, the always-hilarious TV host has posted a slew of super cute photos of her lovely family. So, fans can likely count on seeing even more glimpses of mini Legend, and the entire Teigen/Legend family, in the future.