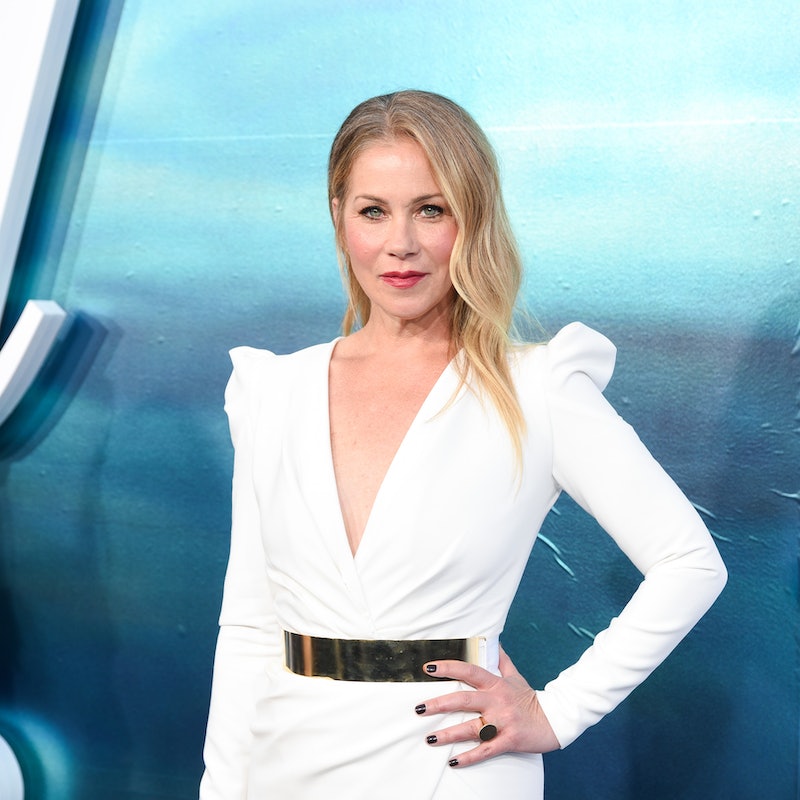 Remember the one where Rachel's sister Amy can't get anyone's name right? Well, Christina Applegate's favorite Friends line from her guest starring role almost never made it into the beloved NBC comedy's Season 9, according to Today.com. Upon meeting her niece, Emma, for the first time, Applegate calls the baby everything from Emmett to Emily. Then, when, Rachel (Jennifer Aniston) later introduces her to Phoebe (Lisa Kudrow), she doesn't think that's actually her name; Amy things she's just making an odd noise — and that Phoebe's name is actually Emma.

“I think my favorite line ... is when I keep saying [Kudrow's] name wrong. And then she goes, ‘Phoebe.’ And I say, ‘Why does she keep making that noise?’ Applegate, who won an Emmy in 2003 for the role, revealed to Today.com in a recent interview. "That was written as a rewrite in front of the audience, and I thought it was hilarious.”

As for her favorite scene, Applegate — who described her character as "self-unaware" and having "no filter" — also shared that the honor went to the fight between Amy and Rachel when the latter admits that she wouldn't give her self-absorbed sister custody of Emma, should both she and Ross (David Schwimmer) ever die.

Applegate's relationship with Aniston off screen, however, couldn't have been more different. “We hung out for a while after that, and I really, really do love her," the actor shared with Today, reflecting on how they "really bonded" while filming.

Another (Central) perk of appearing on two episodes of the show in 2002 and 2003? She got to reunite with so many former costars from the Friends cast. She and Matthew Perry (aka Chandler) appeared together in a 1988 TV movie, Dance 'Til Dawn. "We were little babies ... I've known him for 100 years," she joked.

Matt LeBlanc (Joey) even had a couple guest spots on her 90s show, Married With Children. And as for Kudrow and Courteney Cox (Monica), Applegate had known the pair "from like, 20-something years prior," she added.

"Just hanging out with the cast ... was really the best part of the week because they're just such a great group of people, really fun and funny," said the actor. "And it's easy and it wasn't a hard job. It felt like I got to just hang out with a bunch of people and socialize for a couple of days. And then in the middle of it, we shot a show.”

During Friends'' Season 10, Applegate returned to reprise her role — and, again, was nominated for an Emmy. Here's how Applegate, who most recently appeared in the Netflix dark comedy Dead to Me, ever so humbly described her reaction to the recognition:

“It was shocking that I was nominated for the episodes I did because it honestly didn't feel like work. And it didn't feel like I was doing anything special in any way. I was just having so much fun. I really was in shock when that happened. It was one of those moments of, like, ‘why ... what, me?’ Like in Sixteen Candles when she's like ‘Me?’ And he's like, ‘Yeah, you.’ That's how I felt when they said my name.”

Today.com also spoke to nine other memorable Friends guest stars about what it was like to be on the sitcom, in celebration of the upcoming 25th anniversary of its premiere. Among them: Kristin Davis (Erin), Christine Taylor (Bonnie), and Cole Sprouse (Ben).

Sprouse (aka Jughead from Riverdale) also shared an adorable story about filming with Aniston during his stint as Ross' son from 2000-2002.

“I'm pretty sure I fell in love with Jennifer Aniston, which the whole world had at that point, he recalled to Today. "But I do remember being quite intimidated around her, because of that. I remember blanking on my lines, and having a kind of stage fright when she sat next to me on the couch in one episode. And I remember there was a camera man who was like, ‘Little boy's got a crush,’ or I forget what they said. Of course, I turned bright red."

Even if nobody told you it was this way, it sounds like guest starring on Friends may just have been many actors' dream job — especially for Applegate.