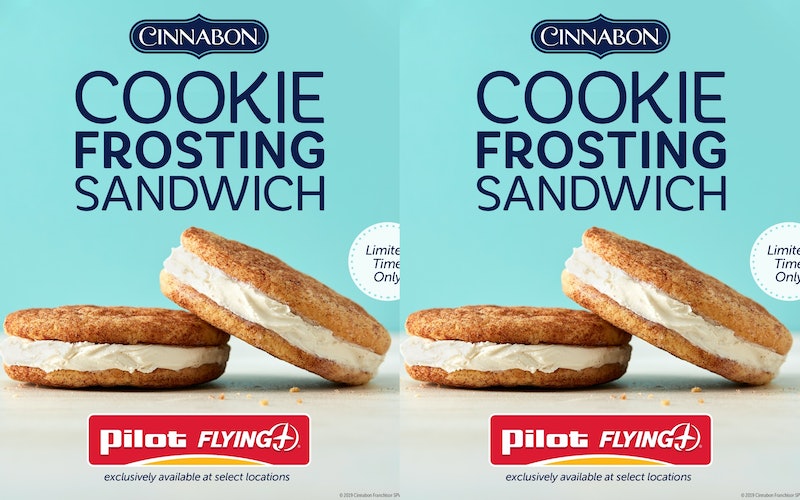 There comes a time in every dessert lover's life when we realize that we are but mere mortals, and that the cream cheese icing at Cinnabon is the true canvas that tells the tale of our universe — which is, I am delighted to report, expanding by the day. Now you live in a world where you can get a Cinnabon Cookie Frosting Sandwich, four glorious words with so much potential on their own that somehow just came together to create a visual so stunning my eyes and taste buds may never recover. But wait, y'all, because it gets even better: the sandwiches in this "cookie" are, in fact, snickerdoodles.

The Cinnabon Cookie Frosting Sandwich is available for a limited time exclusively at Pilot Flying J, so if you were planning a road trip, right the heck now is the time. Per a press release, the confection is "[m]ade with two snickerdoodle cookies infused with Cinnabon cinnamon roll flavor and rolled in cinnamon sugar," then "held together with Cinnabon’s signature cream cheese frosting filling." As someone who is also held together with Cinnabon's signature cream cheese frosting filling, I am honored to at last feel seen and represented by a chain restaurant's dessert.

The offering is selling for $3.29 apiece through August 24, but you can snag one even cheaper than that if you're prepared; from July 14-21, you can use the Pilot Flying J app to secure a buy-one-get-one deal for you and a friend (and by "friend," of course, I mean you, approximately four minutes after you finished the first one).

Am I a smidge concerned that we've flown too close to the sun with this one? Possibly. If we keep innovating dessert like this, at some point we will achieve dessert perfection, and then what other lofty goals will humanity have left to pursue? But seeing as Cinnabon has done a few other mashups without too drastically rocking the time-space-dessert continuum, we are probably safe. Safe to do things like eat the Cinnabon Cookie Frosting Sandwich, or other worthy collabs and menu additions, like KFC's Cinnabon Dessert Biscuits or Cinnabon's own Cinnamon Roll Cold Brew and Churro Swirls. Honestly, I am hard pressed to imagine a dessert that wouldn't benefit from globs of Cinnabon icing and cinnamon swirls.

It's worth noting that the Cinnabon Cookie Frosting Sandwich isn't available at all Pilot Flying J locations, so you might want to call ahead before busting out your Cinnabon sweater and hitting the gas. That said, it's available at over 175 locations, so odds are you are within reasonable driving distance of at least one of them; you can check on Pilot Flying J's store locator. And if you do end up getting the app in pursuit of the BOGO deal, then you should also take advantage of the free coffee that comes with your download. Because truly, what is a delicious sugary road trip snack without a healthy swig of caffeine to wash it down? Onward to victory, my fellow Cinnabon stans.