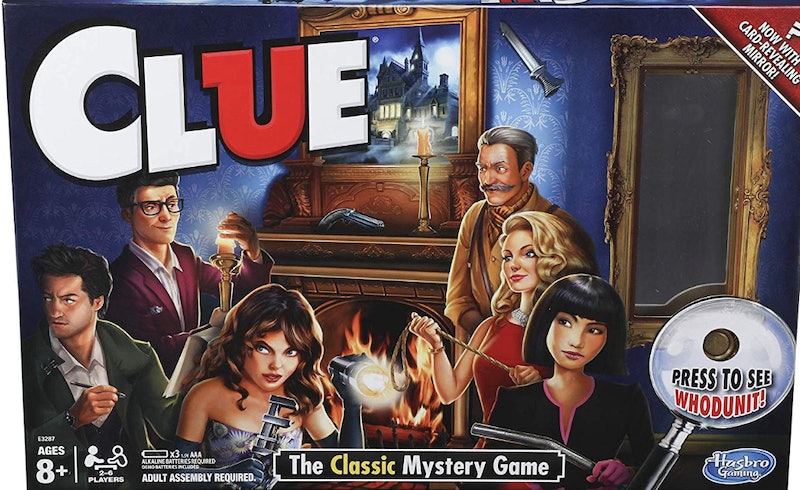 Murder mystery whodunnit game Clue has always been one of my favorite board games — but something’s about to change in the world of Mr. Boddy, Mrs. Peacock, Mr. Green, Professor Plum, and all the rest: The Clue game board is getting a major redesign, with the Hall of Mr. Boddy’s mansion getting jettisoned in favor of a new room. It’ll be the first time the mansion has undergone renovations since the game was originally released in 1949 — and, indeed, it’s actually how Hasbro is celebrating the game’s 70th anniversary. The toys and games giant has teamed up with home design resource Houzz for design guidance on exactly how to redo the space — and all of us fans get to vote on which option gets the green light! The poll opens on Aug. 26 and runs through Sept. 9, so if you want a chance to cast your vote, head on over to Houzz to weigh in.

The game that would eventually become Clue was first dreamed up by English musician Anthony E. Pratt between 1943 and 1945 as a tabletop version of the elaborate murder mystery parlor/role-playing games that were de rigueur for the well-to-do at the time, according to History.com; Pratt frequently witnessed these types of games in action during piano playing gigs at private homes and drew his inspiration from what he had seen. After he patented the game in 1947, he sold it to UK game manufacturer Waddington’s, who began selling it in the UK in 1949 under the name Cluedo. When Parker Brothers licensed the game from Waddington’s for U.S. distribution, it was renamed yet again to Clue. Now made by Hasbro, Clue remains a hit today — so naturally, its 70th birthday is kind of a big deal worthy of a major celebration.

The mansion/game board as it looks today.

That brings us to today’s subject: The board. Traditionally, the Clue board features nine playable rooms laid out in three rows, plus a cellar or set of stairs in the center where the envelope containing the solution the mystery is kept. Row by row, starting from the top of the board and reading each row left to right, the rooms are: The Kitchen, the Ballroom, and the Conservatory; the Dining Room, the Cellar/Stairs, and two smaller rooms, the Billiard Room and Library, stacked on top of each other so as to occupy only one square; and the Lounge, the Hall, and the Study.

But while one can’t deny the usefulness or appeal of most of these kinds of rooms (heck yes, in-home library!), the Hall is sort of… no man’s land. A huge entry hall doesn’t really serve as much of a purpose these days as it did in, say, the Downton Abbey era; indeed, as glorious architectural education and humor site McMansion Hell’s many ruminations on the “lawyer foyer” illustrate, spaces like the Hall are usually just wasted space in modern houses.

So, it’s getting the ax. It seems an appropriate way to celebrate the game’s anniversary. Clue is, after all, a game themed around other people the ax, right?

I see what you did there, Plum.

But, hey guess what? The people who will decide what will go in the Hall’s place is… us! You and me! We get a say in the matter! Thanks to Hasbro’s partnership with Houzz, we get to vote on several options for what should fill the space formerly occupied by the Hall — and you can see exactly what each of these designs might look like in real life before you vote. Options include a Bathroom, a Drawing Room, a Guest Room, or a modernized version of the Hall, all of which are viewable on Houzz if you click those links.

Personally, I think the Bathroom affords the most interesting opportunity; there’s nothing like it on the board right now. The Drawing Room feels too similar to the Lounge to me; the idea of bedroom — which is what the Guest Room would be — just isn’t that exciting; and to be perfectly honest, I don’t see the point in replacing the Hall with another Hall. The Bathroom, though? That’s a new kind of space for the game, which might be the perfect way to add a little oomph to the whole thing as it celebrates its 70th birthday. After the votes are tallied up, the results will be announced on Oct. 21 — and a new edition of Clue featuring the new room will hit toy store shelves in December.

Now, about that whole “this is the first time the mansion has undergone renovations since 1949” thing, especially if we take “the mansion undergoing renovations” to mean “the board is getting an update”: Other editions of the game have been released between 1949 and now. In fact, many other editions have been released between 1949. Just take a look at the Wikipedia page about the franchise; a huge portion of it is a massive laundry list of spinoff board games, each with their own unique sets of rules and design scheme, including but not limited to Clue Jr., a couple of VHS- and DVD-integrated games, Master Detective, and The Great Museum Caper. Additionally, numerous licensed, pop culture-themed versions of the game exist, ranging from an Alfred Hitchcock edition to a The Big Bang Theory one.

A few updates have happened, too. In 2008, for example, Clue received an extensive update called Clue: Discover The Secrets which revised the playable characters’ backstories and personalities — and in 2016, yet another update swapped out the character of Mrs. White for Dr. Orchid. Dr. Orchid, who is the adopted daughter of Clue’s murder victim, Mr. Boddy, has a PhD in plant toxicology; she’s also the only non-white character included in the game’s main cast. This edition is the one that’s currently sold on Hasbro’s website, although there’s also a “retro” version designed in the style of the 1986 edition available. (That’s the one I grew up playing, so I, uh, have a certain fondness for it, despite its dated appearance. In other news, I am an Old.)

But in all that time, the actual makeup of the board — by which I mean the actual rooms present on it — used for versions of Clue abiding by the classic rules (that is, not games like The Great Museum Caper) has remained largely unchanged. Now seems like as good a time as any for a little home renovation, and I for one appreciate having a say in the matter.

Cast your votes over at Houzz between Aug. 26 and Sept. 9; then stay tuned on Oct. 21 to find out the results. May the best room win!

More like this
The “Teenage Dirtbag” Trend Is TikTok's Latest Nostalgic Obsession
By Meguire Hennes
On TikTok, #SeñoraEra Shows Latinx Users Becoming Their Mothers
By Natalia Perez-Gonzalez
12 Cheeky Instagram Captions To Use When You Haven’t Posted In Weeks
By Emma Carey
13 Selfie Instagram Caption Ideas That Exude Main Character Energy
By Jessica Booth and Emma Carey
Get Even More From Bustle — Sign Up For The Newsletter