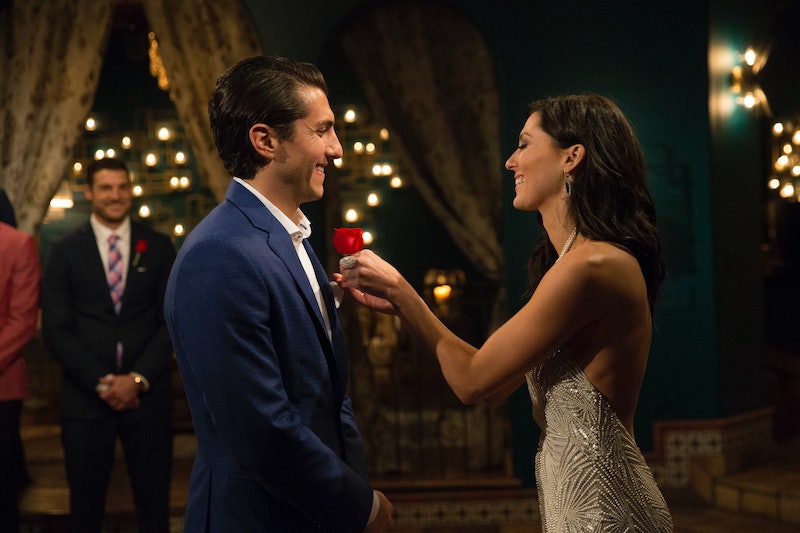 Jason wasn't one of the guys who immediately looked like a frontrunner this season on The Bachelorette, but right now he's definitely in the running to come out on top. He's worked his way into both Becca's and fans' hearts, which means that even if she doesn't give him the final rose, there are still tons of clues that Jason could be the next Bachelor. Which means that America's love affair with him will go on, lest Becca ends up with someone else.

First of all, his personality definitely fits the bill for someone who would be able to helm a show. During the last season of The Bachelor, viewers had to endure Arie, an endlessly bland lead who only ever uttered the same five phrases. Jason would be a welcome reprieve — he's charismatic, he's funny, and he always seems game for a laugh.

He's also avoided making any real enemies this season, and that hasn't been the case with everyone. Jason has allowed the other guys to have their spats completely separately from him. Jordan rubbed plenty of people the wrong way, even though he was pretty harmless and very entertaining. Colton had the whole Tia drama surrounding him for a few episodes, which definitely caused some conflict between him and Becca, and,Chris was just a loose cannon who often came off as controlling and condescending. Jason ended up standing out simply by being as chill as humanly possible. That's one thing he has going for him. These are just a few more clues that Jason might be the lead next season.

His social media suggests he's a family-oriented guy, which is another adorable quality people seem to like in a lead. Jason's Instagram posts include shots of him dancing with his mom on Valentine's Day, and praising his parents' relationship. All of those things make him a great catch for Becca or a show that he'd be "there for the right reasons" were he to helm the show next time around.

So we've established that Jason is the right personality for a potential Bachelor, but perhaps more importantly is his impression on fans. And that seems to be going well, too — he's gaining a following on social media, which is a good sign. It'd be helpful for the next lead to be a familiar face, and one that plenty of people keep up with. He's got about 116,000 Instagram followers, and nearly 12,000 Twitter followers.

Those aren't necessarily Kardashian-level numbers, but they're nothing to turn your nose up at, especially for a guy who's only been on TV for a handful of weeks at this point. His name is definitely being thrown around by swooning fans on the internet.

Seriously, even Connor had a moment of drama earlier this season when he threw Lincoln's photo into the pool, despite being pretty neutral for the rest of the season. Throughout all of this, Jason has been chilling in the background, waiting for his turn with Becca, and otherwise being inoffensive as can be.

He's even been vocal about becoming good friends with some of the other guys in the house, instead of butting heads with them. While drama certainly stirs up ratings, it doesn't seem as important when looking for a Bachelor — production will want to find someone fans can root for. Especially since the Arie-Becca-Lauren fiasco last year, the show needs a safe, respectful bet with a good head on his shoulders.

Others On Social Media Agree

Though there are plenty of other acceptable possibilities. Wills, for example, would make a great choice, and people are are even lobbying for Blake, Colton, or men from past seasons. Yet, Jason's name came up time and time again as fans speculated. "He seems to have a really steadying energy, ... [is] one of the most well liked among the men, tender with Becca without being too in her face, [and] he has more personality then the other final 3 combined," wrote Redhotrose2 in another thread. "I think he's just been a surprise and breath of fresh air."

Of course, there's still the possibility that Becca chooses Jason at the end and he'll be too busy embarking on life with her to give fans another season of his charms. But if he does end up at the mansion next season, it doesn't seem like anybody will be complaining.