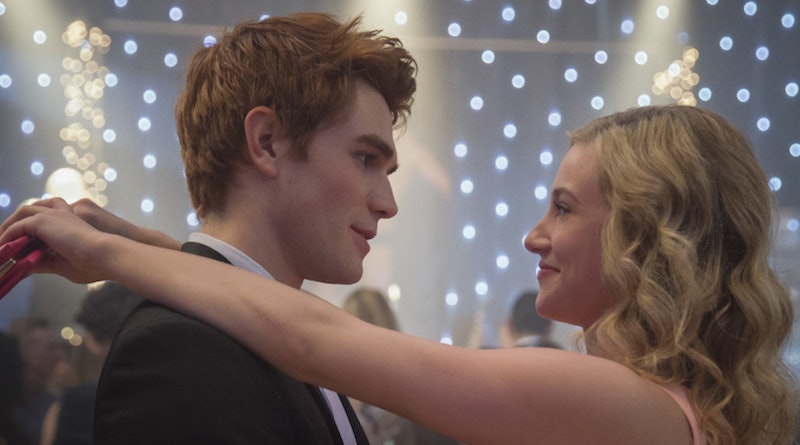 It was made clear at the very beginning of Riverdale that Betty had a crush on Archie. This didn't come as much of a surprise, as the Archie comics have been anchored by the Archie-Betty-Veronica love triangle for over half a century. The alteration from that canon was, that in Riverdale, Betty's feelings were unrequited — until now. The Dec. 6 episode of Riverdale hinted that these two could finally fall for each other, but the series has been leaving clues that Betty and Archie will date since the beginning of Season 2.

Quickly into Season 1 of Riverdale, the show divided its main group of four into two couples: Betty with Jughead and Archie with Veronica. However, Season 2 has used the pressure of the Black Hood's spree to break apart the show's lovebirds. With Bughead and Varchie on the outs, the latest episode ended with Archie and Betty exchanging a longing gaze suggests that the inevitable will finally happen, and soon. While it may have seemed to some like Archie and Betty were always destined to end up in a relationship together, no one could've expected how it would happen, and that it may have ended up being the Black Hood's plan all along. In a way, the Black Hood may be the most dangerous 'shipper of all time.

While the Black Hood's obsession with Betty hasn't been entirely explained, what is clear is that he seems to be interested in separating her from everyone in her life except Archie. The Black Hood demands that she ruin her friendship with Veronica, forces her to break-up with Jughead, but has yet to ask her to remove herself from Archie. Either the Black Hood has something big planned for her lifelong crush, or the masked murderer has been intentionally trying to bring these two together.

For example, Ms. Grundy's murder leads to Archie asking Betty for help getting information on her autopsy. Then, the Black Hood's actions push Betty to reach out to Archie for help. After the Black Hood's inirial phone call, the first person she talked to about it wasn't Jughead or the police — it was Archie. When the Black Hood forces her to break-up with Jughead, she has it done by asking Archie to break up with him for her. By forcing her to cut out everyone in her life except Archie, Betty has been pushed into reigniting the romantic flame between them.

The Black Hood has invested his energy into manipulating Betty, and the show has also been laying metaphoric breadcrumbs for Archie to follow that would lead him to falling for her. Archie's relationship with Veronica has been rocky for most of Season 2, and Betty's dire situation helped satisfied Archie's greatest desire — the need to be a hero. Archie can't stop himself from trying to save others or forming shirtless vigilante groups in the name of saving others. While dating Veronica only allowed him to be a boyfriend, helping Betty allowed him to be the hero he always strives to be.

It's not likely that the Black Hood is someone who is willing to murder multiple people just because he thinks Betty and Archie are cute together, but there's still a chance that they never would've fallen for each other if it hadn't been for the masked killer. The show has been building towards an Archie and Betty relationship all season, even if it has been through murder and manipulation. Romance isn't simple for anyone in Riverdale, especially with a murderer on the loose, and those hoping that Betty and Archie's relationship will have a happy ending should hold their breath until after the Black Hood is taken care of once and for all.