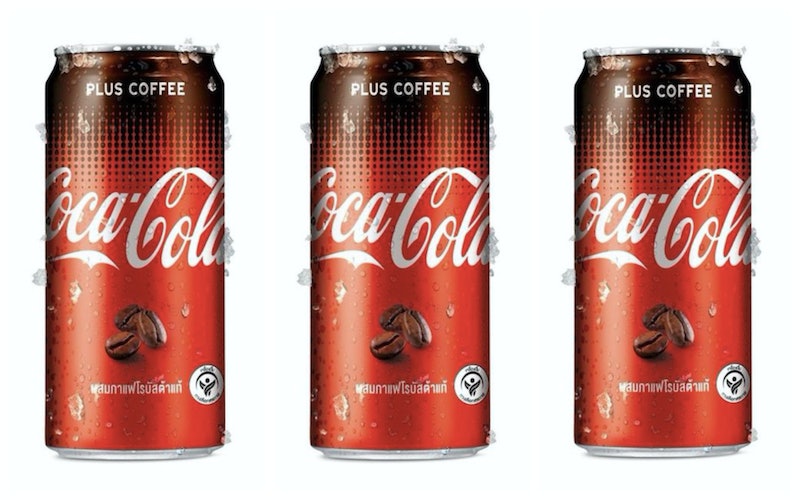 Have you ever been drinking a lovely cup of joe and, instead of adding a splash of milk, had the urge to pour in a sweet, sweet can of Coke? No, no you haven't — nobody has. But coffee and Coke combined are apparently a real thing. I'm not talking about ruining your cup of joe with a splash of soda — I'm talking about the new Coca-Cola Plus Coffee option rolling out around the world.

That's right, Coke with a coffee twist. CNN reports that the drink's initial appearances in places like Australia, Italy, and Thailand are doing well — and that it will be available in 25 countries by the end of the year. According to CNN, the new drink will "tastes a bit like a coffee-flavored candy — as sweet as regular Coca-Cola, with an added coffee kick." Sounds pretty delicious — and, of course, a little bit of caffeine never hurts. It's more caffeinated than a regular Coke — which also gives a little boost of caffeine — so it may help you push through those groggy afternoons.

The coffee and Coke combination actually isn't new. In 2006, after the launch of a Coke energy drink, a Coke coffee drink was not far behind — Coca-Cola Blak. It may sound like a sexy, European name, but that wasn't enough to make the drink a success. While the product performed well elsewhere in the world, in the US the recipe didn't hold up and the product only lasted a couple of years. But now, coffee and Coke are reunited with Coca-Cola Plus Coffee.

There's no word yet on whether this drink is definitely coming to the United States. But Javier Meza, Coca-Cola's global chief marketing officer of sparkling beverages, told CNN Business he "believe[s] that there's going to be a space for a Coca-Cola With Coffee" here at home, while another spokesperson told CNN they're "optimistic about the potential for the beverage" here — so hopefully we'll be seeing it sooner rather than later. More ways to ingest caffeine are always welcome, especially in the US of A.

The lines between sodas, coffee, and energy drinks are definitely becoming blurry. In fact, it seems like anything can get a caffeine or an energy kick these days. Baskin-Robbins even came up with Baskin-Robbins’ Energy Freezes, which blended NOS Energy or Monster Energy with any ice cream flavor you could possibly want for... energy ice cream? Ice cream surges? Sugar lightening bolts? It seemed like a confusing product to me. Or you can go for Bang Frose Rose, a rose-flavored energy drink. Hell, you can even get caffeine-infused gummy bears. Seriously, the world is a weird place, where seemingly everything under the sun can be given a caffeine or energy jolt. Meanwhile, on the other end of the spectrum, Red Bull came out with an organic soda line, most of which was caffeine-free — because that's what Red Bull customers want. Maybe? Up is down, black is white. And I don't know who to trust anymore, so maybe I'll just start cutting out the middle man and injecting caffeine into my eyeballs.

Coca-Cola Blak might have been too sexy for its "c," but it didn't stick around stateside. A decade later, is there room for Coca-Cola Plus Coffee in the U.S. market? We'll just have to wait and see — but I can guarantee you that coffee addicts around the country will be waiting with baited, coffee-scented breath.