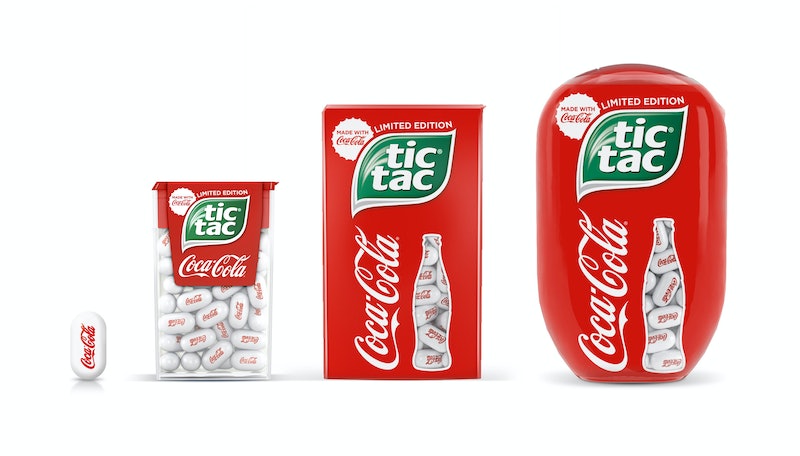 On the next episode of Product Mash-Ups You Thought You Made Up In Some Weird Candy Aisle-Induced Fever Dream are the new Coca-Cola Tic Tacs, which are — unsurprisingly — Tic Tacs that taste like Coca-Cola. The Tic Tacs will sell in containers in three different sizes, and are all emblazoned with a little "Coca-Cola" logo on them. According to a press release, this "exclusive limited edition" product will be rolling out in 70 countries over the next few months, and is the only time Coca-Cola has ever been turned into a mint — a sentence you are probably not surprised to read, as there have been very few moments in human consciousness where someone sipped a soda and thought, "Huh, what would this be like as a mint?"

If you're wondering how they taste, you'll likely have to wait until they hit shelves to find out. That said, this prompts yet another question that may be more pressing than the Tic Tac situation: What does Coca-Cola taste like? For a brand that has coined the slogan "Taste The Feeling," it sure has been a mystery how said feeling actually tastes. The flavor syrup that Coca-Cola uses is so well-protected that it is a mystery to all but a select few, although people liken the flavor to vanilla and cinnamon. All in all, not a bad flavor for a Tic Tac, if that's what it ends up tasting like in the end.

Here are the three different collectible sizes you can find it in as it starts to roll out on shelves.

This isn't the only news that has come out in Coca-Cola land lately. In May of this year, Coca-Cola boldly brought back the much maligned New Coke, a flavor introduced in the 1985 that was infamously unpopular at the time. It launched in conjunction with a new season of Stranger Things, where the characters encountered New Coke in the '80s-set show just as Coca-Cola made New Coke available in the real world in 2019. (For what it's worth, New Coke has a decidedly different sweetness to it, and some complained about an aftertaste — I wasn't quite able to detect it, since I'm not a huge soda drinker, but people were divided enough to make this campaign as cheeky as it was nostalgic.)

Also upcoming on the Coca-Cola radar is the introduction of Cinnamon Coca-Cola, which hit shelves in early October in anticipation of the holidays. The limited edition flavor will be available until Dec. 31, at which point it will disappear with the new year. According to Coca-Cola, it has "the original taste of Coca-Cola with a dash of delicious cinnamon flavor." Is it too early to wonder if that would make a decent Tic Tac too?

Anyway, I suppose if we live in a world where Froot Loops-flavored Pop-Tarts exist, it was only a matter of time before Coca Cola-flavored Tic Tacs joined the fray. If anyone needs me I'll be waiting for Frosted Flakes to take the hint and team up with the Pillsbury Doughboy — in fact, if either of you are reading this, call me. My taste buds have thoughts.